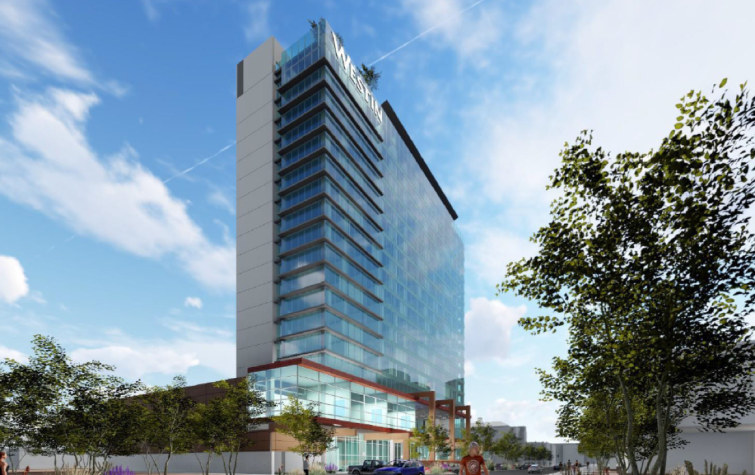 Las Vegas’s CAI Investments has signed on for an $86.5 million mortgage from Hall Structured Finance to back a hotel development project it’s working on in Tempe, Ariz., the Dallas private lender announced today.

The deal gives CAI funds to build a 290-room Westin hotel in the Phoenix suburb, at a site within walking distance of Arizona State University. The 18-story building will include a rooftop pool, a full-service restaurant and more than 10,000 square feet of meeting space.

David Cain, the loan’s originator for HSF, said that his company secured its place in the deal by coming to the table with a greater appetite for leverage than its competitors.

“The main reason why we were able to win this is that we were able to creep up higher in the capital stack,” Cain said, adding that the debt’s final loan-to-cost ratio hits 75 percent. “That’s a rarity in construction lending, but that’s our bread and butter.”

In addition to the nearby university — which, with an enrollment of nearly 52,000, is one of America’s largest — a nearby regional headquarters for State Farm, an insurance company, is sure to be a big source of demand, according to Cain. In 2015, workers began moving into the freshly built complex of five new office towers in the Marina Heights neighborhood, a strip just north of Tempe that abuts the Salt River.

Travel to Tempe hit a new high last year in part thanks to the promotional efforts of the city’s tourism office, Az Business, a local business journal, reported. In the wake of a national marketing campaign and outreach to the conference-planning industry, hotel revenue grew 12 percent last year over the 2017 level, and the year saw guests book nearly 250,000 more rooms than they did in 2016.

Meanwhile, Cain said, competition in the forthcoming Westin’s business segment was still slim. The most direct nearby competitor is the Tempe Mission Palms, Cain said, describing that lodging as well kept but aging.

Workers broke ground on the Westin early last year and completion is expected in 2021.

“We’re a vertically integrated development property that likes to identify challenging projects,” Christopher Beavor, CAI’s founder, said in a video documenting the start of work on the project. “Tempe is bringing a lot of national and international business travel, and Westin is going to be a nice plan that’s well recognized amongst those travelers.”

A CAI Investments spokeswoman did not immediately reply to a request for further comment.