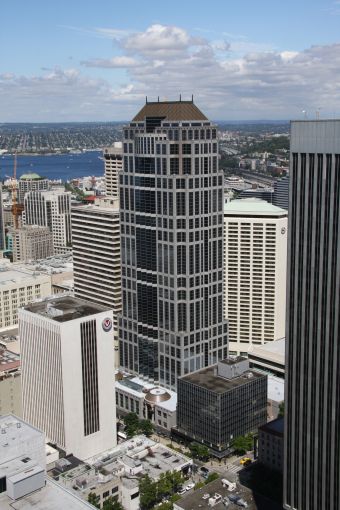 Wells Fargo and Deutsche Bank have combined to provide about $800 million in debt to fund Blackstone’s acquisition of two major office towers in Seattle, sources close to the deal confirmed to Commercial Observer.

The debt funds Blackstone’s approximately $1.3 billion purchase of the Wells Fargo Center at 999 Third Avenue and the U.S. Bank Centre at 1420 Fifth Avenue in the Pacific Northwest’s largest city. Together, the skyscrapers comprise just shy of 2 million square feet of rentable office space.

The deals were recorded in King County, Wash. property records on July 1.

Commercial Mortgage Alert reported in early May that Blackstone was looking for a $425 million loan for its U.S. Bank Centre acquisition, as well as $380 million to fund its purchase of the Wells Fargo Center. Fittingly, Wells Fargo signed on as the lender on its namesake building, while Deutsche Bank is bankrolling the U.S. Bank Centre acquisition.

Eastdil Secured brokered the deal on behalf of Blackstone. A spokeswoman for the company declined to comment.

Canada’s Ivanhoe is the seller in both deals. It bought the Wells Fargo Center for $390 million in 2013, as per CMA. Together with Callahan Partners, it also was a co-owner of the U.S. Bank Center, with the Abu Dhabi Investment Authority as a third partner. Ivanhoe bought Callahan last year.

U.S. Bank Centre, a 44-story structure, went up in 1989 and is now Seattle’s eighth-tallest building. Designed by Callison Architecture, the building hosts tenants that include law firms, medical offices and, of course, U.S Bank. A three-story shopping arcade on the building’s lowest floors hosts an impressive public art collection that includes a sculpture by glassworker Dale Chihuly.

The Wells Fargo Center is just a step behind: A 47-story building that’s Seattle’s ninth tallest. It was built in 1983 to replace the former headquarters of Olympic National Life, an insurance company. DocuSign, a business services company; Hillis Clark Martin & Peterson, a law firm; and Leisure Care, a senior-living company are among the renters at the skyscraper—in addition, obviously, to Wells Fargo.

Representatives for Blackstone and Wells Fargo declined to comment. A Deutsche Bank spokesman did not immediately respond to inquiries.