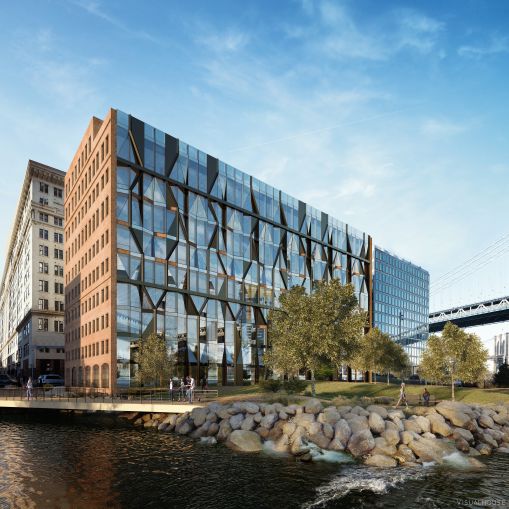 The debt refinances a $150 million bridge loan from 2017, provided by ACORE Capital.

Several lenders competed for the new financing, Benjamin Stavrach, Triangle Asset’s director of leasing and property management, told CO. “It is definitely the hottest building in Brooklyn with an amazing tenant roster.  Our construction was of the best quality, and you can truly see the finished product shine,” he said.

The 222,228-square foot asset sits on the East River waterfront next to Brooklyn Bridge Park and has protected, unobstructed views of Manhattan, the East River and the three bridges. It was constructed in 1890 by the Arbuckle Brothers Coffee Company as a sugar refinery and converted to a state-of-the-art, ODA New York-designed Class A office building in 2014.

“My father purchased 10 Jay with his brothers and sister in 1989, and had the vision back then that one day Dumbo and the waterfront would turn into a beautiful place to work and live,” Stavrach said. “I believe 10 Jay turned out to be even more magnificent than they had realized, sitting as the gem on the water in Dumbo.”

The asset is flying high on strong leasing momentum. It is the new headquarters for Rent the Runway—which inked a lease for 83,000 square feet across four floors in May, including 10,000 square feet of outdoor space on the 10th floor overlooking the East River. It’s also home to Soho Works’ flagship New York City location. In January, the co-working outpost of hotel and private-club chain Soho House signed a 15-year lease for 50,000 square feet at the property, which is conveniently in walking distance from its Dumbo House location at Empire Stores.

“Sponsorship has done an incredible job transforming the old sugar refinery into the best creative office product in Dumbo. The waterfront views overlooking Brooklyn Bridge Park are second to none and the outdoor event space on the rooftop is a unique and significant demand driver,” Stolly said.

“Over the past few years, Dumbo has received substantial investment and has really transformed from a traditional industrial neighborhood to a 24/7 live-work-play destination and an attractive alternative to Manhattan,” Roeschlaub added.