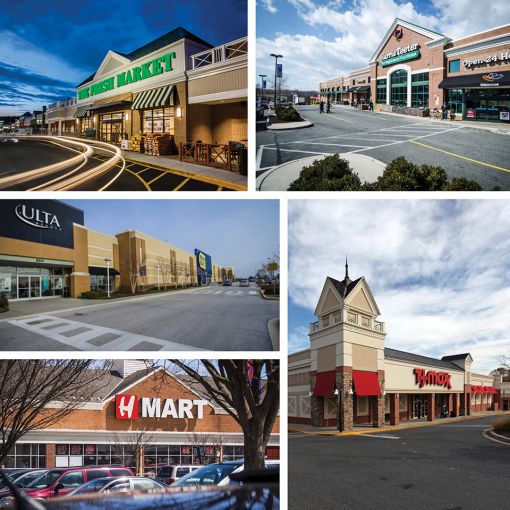 The deal was secured by HFF prior to being acquired by JLL, with the firm representing the seller in the deal. The JLL Capital Markets team was led by Daniel Finkle, senior managing director and co-head of HFF’s retail practice.

“The portfolio of core retail is ideally located in dense suburban neighborhoods,” Andrew Leahy, WashREIT’s vice president, investments and acquisitions, told CO. “The neighborhoods were well-located, but also the grocery-anchored centers deliver the services and goods those neighborhoods need.”

Overall, the portfolio was 97.7 percent leased at the time of the deal.

Two of the properties are situated in Alexandria, Va. They are comprised of the 168,000-square-foot Bradlee Shopping Center at 3600 King Street, between the intersection of King Street and Braddock Road; and the approximately 135,000-square-foot Shoppes at Foxchase, located at 4513 Duke Street, at the intersection of Duke Street and Jordan Road. The latter is anchored by Harris Teeter and its tenant roster includes Cava, Rite Aid and Chipotle.

“This portfolio is a collection of well-operated and successful retail centers in the D.C. Metro region,” Finkle said in a statement. “The infill locations in affluent submarkets coupled with the solid tenant rosters have been key components of the portfolios past performance and its future success.”

According to Leahy, WashREIT owned the properties for various lengths of time. Wheaton Park, which it had owned since 1977, was its oldest holding, and Olney Village Center was the most recent, having been acquired in 2011.

“We are excited to grow our multifamily business, and to do so, we opted to reduce our retail footprint,” he said.

The properties in the portfolio are all situated in affluent suburbs within the metro Washington, D.C., region. Annual household incomes within a three-mile radius average $126,200, according to JLL.