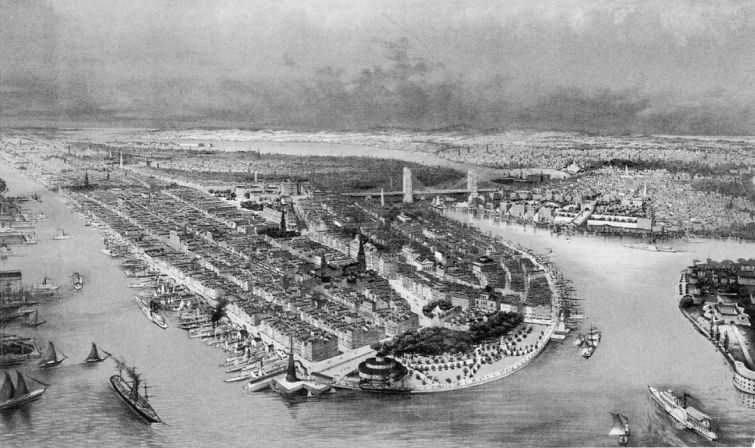 Castle Clinton, The Battery and the Financial District in 1880. Photo: Library of Congress

The Fourth of July is a good time to remember that much of the history involving New York City’s Revolutionary War happened in its oldest neighborhood—the Financial District. Before you catch the fireworks, take a walk around the southern tip of Manhattan and visit Manhattan’s only colonial-era church, the tavern frequented by George Washington, New York’s first City Hall, and one of the city’s oldest and most famous military forts.

Built in 1766, a decade before the Declaration of Independence was signed, St. Paul’s Chapel was the only church to survive the Great New York Fire of 1776 that destroyed much of lower Manhattan. Now the chapel, deemed “The Little Chapel that Stood,” by children’s book author A. B. Curtis, is the only colonial church remaining in Manhattan, according to Trinity Church.

A congregation of Anglicans first petitioned the Royal Governor Benjamin Fletcher of New York in 1696 to request legal status and, in 1697, Trinity Church was constructed. St. Paul’s Chapel was one of two chapels constructed in the latter half of the eighteenth century by the Trinity Church in response to a population boom in Manhattan, which caused overcrowding in the main church.

After his first inauguration, which took place at Federal Hall on Wall Street, George Washington attended service at St. Paul’s. Washington was a frequent worshipper in the church for the duration of his time in New York. John Jay and Alexander Hamilton were also known to attend.

The chapel had undergone several renovations following the war. In 1890, it was opened as the Second Trinity Church and had a new 200-foot steeple. In 1838, its support beams began to buckle. The Trinity Church, redesigned by Richard Upjohn, was consecrated in 1846. With its 281-foot steeple, it was the tallest building in New York City until 1890.

In the years leading up to the Revolutionary War, Fraunces Tavern was a breeding ground for political discourse. The Sons of Liberty were one of many organizations that regularly patronized the establishment.

During the war, the tavern was run by the owner, Samuel Fraunces’ Loyalist son-in-law, Charles Campbell. Loyalist refugees, including thousands of slaves fleeing from Patriot slave owners, flooded into New York during the war. Many people hoping to recapture escaped slaves followed. Weekly trials were held at the tavern by British General Samuel Birch. Enslaved people who had served the crown were given certificates of freedom that granted them passage out of the City and away from slave catchers, according to the Fraunces Tavern Museum.

Following the war, American patriots reclaimed the bar. During the week following Evacuation Day, when the British Army left Manhattan after the end of the Revolutionary War, prominent revolutionary figures including George Washington and New York Governor George Clinton celebrated there. On December 4, nine days after the British left the city, George Washington gathered the officers of the Continental Army in the Tavern to say one last goodbye before heading back to Virginia.

On July 4, 1804, Alexander Hamilton and Aaron Burr both attended a Society of Cincinnati meeting at the tavern a week before their deadly duel.

By the 1900s, after a series of fires, the tavern no longer resembled its historical structure. Still, the historical significance of the tavern was not lost and it was designated a New York City landmark in 1965. (They also make a decent hamburger.)

Most New Yorkers know The Battery as a swath of green at the southern tip of Manhattan, near the Staten Island Ferry Terminal. But the picturesque site overlooking New York Harbor has also played a pivotal role in New York City history, first as a military fort and later as a major immigration processing center.

Recognizing the area’s tactical importance, Dutch settlers constructed Fort Amsterdam in 1626 on the site of what is now the Alexander Hamilton U.S. Custom House, which currently houses the National Museum of the American Indian as well as Manhattan federal bankruptcy court, according to the National Park Service. The Britsh took over the wooden fort in 1664 and installed an artillery battery there, which is how the Battery got its name.

By 1714, it had been renamed Fort George. The fort became increasingly dilapidated and was mostly used as a defensive post until the Revolutionary War rolled around; in 1776, American troops occupied The Battery and exchanged fire with British ships sailing up the East River. When British troops landed in Manhattan in September of 1776, they garrisoned the fort along with the rest of Lower Manhattan until November 1783, when the British army officially departed New York City.

Five years later, Fort George was demolished, and its concrete remains were used to extend The Battery. Just before the War of 1812, a new, circular fort was constructed on a small artificial island and named Castle Clinton for Governor DeWitt Clinton. For the next 30 years, the city managed the fort and turned it into an entertainment venue and reception hall, hosting figures like Samuel F.B. Morse, who demonstrated his new “wireless telegraph,” and Hungarian political leader Lajos Kossuth. During the latter half of the 19th century, the castle was used as the federal immigration center for the entire East Coast, processing eight million immigrants, according to the city Parks Department. During this same period, the modern Battery Park was created and expanded with several acres using landfill from street widening projects Downtown, which allowed the city to join Castle Clinton’s island with the rest of The Battery. Castle Clinton—which was by then known as Castle Garden—also housed the New York Aquarium from 1896 to 1941.

Master planner Robert Moses tried to tear down the fort in 1941 to build the Brooklyn-Battery Tunnel, as Robert Caro recounts in The Power Broker. Preservationists ultimately blocked his efforts, but not until after the interior had already been demolished. In 1946, Congress officially declared Castle Clinton a national monument. During the 1970s and 1980s, the National Park Service renovated the building and turned it into a ferry terminal for tourists visiting the Statue of Liberty and Ellis Island—a role it continues to serve today.

The office building One Broadway on the corner of Battery Place is a landmark in its own right, but the history of the plot of land dates back even further than the 12-story property built in 1882. It’s original building served as one General George Washington’s headquarters during the Revolutionary War, The New York Times reported.

In the 1700s, Archibald Kennedy—later the Earl of Cassilis—bought the plot of land at the beginning of Broadway and built a mansion on the site, according to The History of the City of New York by Martha Lamb. Kennedy remained in the home until he ditched the states.

The house was later taken over by Major General Charles Lee and then General Israel Putnam—one of Washington’s top ranking generals—in 1776 as a base of operations in the city, according to the Times and the book The Life of Israel Putnam by George Canning Hill. Washington often visited the home at the time and even hosted a formal dinner there after peace talks with the British fell through, the Times reported.

One Broadway escaped the Great Fire of New York in 1776 and remained a home until around 1851 when it became known as the Washington Hotel, according to the New York City Landmarks Preservation Commission. It was demolished around 1882 to make way for the Washington Building, which was later redesigned in 1902 to become The International Mercantile Marine Co. headquarters.

The gated park at the foot of Broadway, Bowling Green, is a refuge for workers in the Financial District looking for a break and has been a part of the city’s history from nearly the beginning.

Legend has it that Bowling Green was the site where Peter Minuit bought Manhattan from Native American tribes in 1626 and was declared public property in 1686, according to the New York City’s Parks Department. It’s the oldest park in the city after it was designated in 1755 after John Chambers, Peter Bayard and Peter Jay leased it for one peppercorn a year.

In 1770, a lead statue of King George III of England was built in the park and in 1771 the iron fence, which still surrounds the park this day, was added, according to the Parks Department. However, Bowling Green’s place in the Revolutionary War started on July 9, 1776.

On that day, the Declaration of Independence was read out loud to Washington’s Continental troops at what’s now City Hall and the revved-up crowd then sought out the nearest symbol of British rule. The mob marched to Bowling Green, tore down the statue of King George on his horse and dragged it up Broadway, according to the Times.

The statue was later taken to Connecticut where it was melted down and used as ammunition for the Continental army—but portions of it still remain at the New-York Historical Society and the Museum of the City of New York, the Times reported.

Although little of the original building remains, Federal Hall remains a historically and culturally significant landmark in the city.

The building opened in 1704 as the New York City Hall. The building served as the office for the Governor’s Council, the New York Assembly, the Supreme Court and the city jail. In 1765, delegates from nine colonies met in the building to protest the Stamp Act and demanded colonial equality under British law.

After the war, the building was the center of the U.S. government. The Confederation Congress met there from 1781 to 1789 and after the introduction of the Federalist government, New York became the nation’s capital. The former New York City Hall was transformed by Peter L’Enfant to be used as the Capitol Building — the House Chamber was enlarged to have a 46-foot ceiling, with spectator seats and windows 16 feet above the ground.

Federal Hall was the site of George Washington’s first inauguration on April 30, 1889. Congress passed legislation approving the Bill of Rights and establishing the judiciary in the Federal Hall in September of that year.

The capital was relocated to the District of Columbia in 1790 and in 1812, the hall was demolished and sold for scraps in order to fund a new City Hall on Wall Street. In 1842, the building was revived as the U.S. Customs House for the Port of New York, which also moved to Wall Street 20 years later. The New York Sub-Treasury took its place in 1862.

On the 150th Anniversary of Washington’s inauguration, 1939, the Federal Hall was deemed a National Historic Site. Its facade was landmarked in 1965.