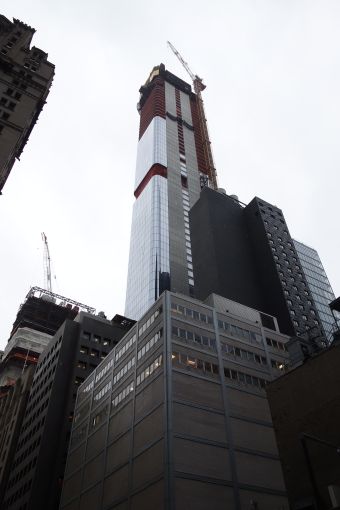 The troubled debt on the 125 Greenwich Street construction project has been scheduled for a Uniform Commercial Code (UCC) foreclosure auction in mid-August, Commercial Observer has learned.

The mezzanine lender—United States Immigration Fund through a special purpose entity created to hold the mezzanine debt—has taken steps to initiate the foreclosure.

United Overseas Bank, the construction lender for the 88-story, 1,400-foot tower in Lower Manhattan, claimed in a court filing that the developers, Davide Bizzi of Bizzi & Partners and Howard Lorber of New Valley, were past due on $187 million in payments, as The Real Deal first reported. Now, the residential and retail tower faces both a mortgage foreclosure as well as a UCC action.

The UCC foreclosure sale is scheduled for August 15, as per offering documents shown to CO. UCC foreclosure actions allow aggrieved lenders to proceed on a faster timeline than standard foreclosure actions—weeks instead of years. The processes differ in that the UCC route technically attacks the borrower’s business interest in the asset, not the property itself.

Dustin Stolly, Jordan Roeschlaub and Nick Scribani of Newmark Knight Frank are marketing the beleaguered project on behalf of the Singaporean lender, the documents show. The brokers could not be reached by press time.

Beset throughout its five-year construction phase by conflict between the developers and, more recently, by mechanics’ liens, 125 Greenwich Street’s topping out—which occurred in March—was an achievement unto itself, The Real Deal reported. In addition to the United Overseas Bank loan, the developers are liable for interest on that debt, as well as nearly $200 million in junior debt from a variety of sources including financing from the EB-5 visa program.

Prices for the 273 units at the skyscraper—designed by Rafael Viñoly—range from just over $1.1 million for a studio residence to nearly $7 million for a three-bedroom apartment. The development also includes around 13,000 square feet of ground-level retail space, according to CoStar Group.