Wrestling With Fannie and Freddie’s Expanding Role in Multifamily Lending

Fannie and Freddie’s conservatorship was meant to shrink the role of public capital in the housing market. Why has their residential business grown? 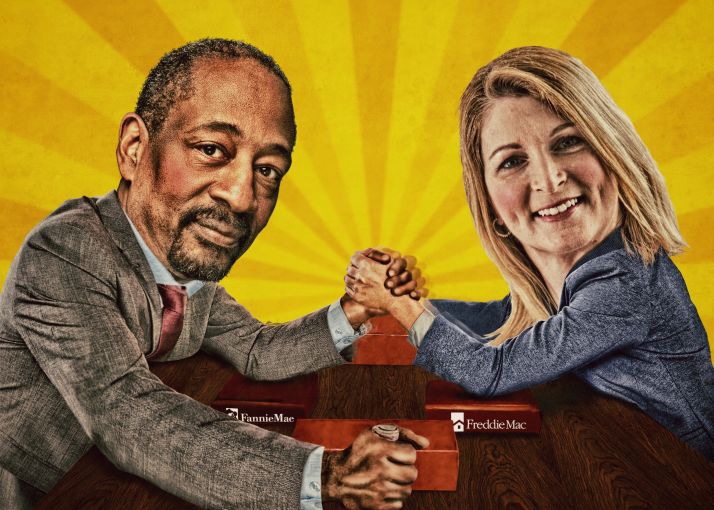 Reports last week indicated that Fannie Mae and Freddie Mac, the twin institutions that guarantee U.S. housing loans, could finally be on the brink of exiting their decade-long federal conservatorship. If so, it’d mark a sea change for multifamily finance. In captivity, the giant agencies had become the elephants in the housing debt markets: massive forces that their custodians—Congress and the Federal Housing Finance Agency—haven’t been quite sure what to do with.

But that doesn’t mean the twin pachyderms have been caged in a zoo or grazing on the savanna.

If the feds are indeed on the brink of turning loose the dual government-sponsored entities (GSEs) as The Wall Street Journal reported late last week, they’d return to private hands after five years on the march, during which they’ve staked out an ever-expanding role in national multifamily financial markets. (A spokesman for Freddie Mac cited a policy barring the agency from commenting on the FHFA’s conservatorship activities, and a Fannie Mae spokesman referred questions to the FHFA, which did not immediately respond to an inquiry.)

In recent months, the agencies have seemed to double down on that role. In a substantial chain of piecemeal tweaks to their multifamily business lines, both agencies have gradually but persistently requisitioned more ground in the debt markets for rental apartments, the latest evolution in a years-long trend towards growing market share.

In theory, the FHFA has strictly limited the extent to which Fannie and Freddie can wade into multifamily finance. It caps the annual volume of lending that each can guarantee—last year, the figure was $35 billion apiece—reflecting the supervisory agency’s caution around letting the agencies take an outsized role in financing the asset class.

But if those guidelines are intended to definitively check the pair’s ambitions, both have managed to far outpace FHFA’s nominal guarantee limit. They’ve done that by taking advantage of a list of exceptions that FHFA includes in the annual maximum, which has allowed both agencies in recent years to sprint past the $35 billion threshold. They’ve focused their efforts on a pair of niches—funding for affordable housing and for efficiency-minded renovation projects—that don’t count against the FHFA’s upper boundary.

Combined, the agencies account for almost half of the annual volume of multifamily debt issued in America—up from 29 percent in 2014. At first glance, that’s perhaps a counterintuitive result for institutions whose supervisor, the FHFA, has mandated them to “reduce taxpayer risk through increasing the role of private capital in the mortgage market.”

Responding to questions regarding new multifamily initiatives, especially with regard to recently introduced risk transfer mechanisms, Debby Jenkins, the agency’s head of multifamily said the programs “have been smaller pieces of the larger platform. They’re very specifically oriented toward our core mission, and duty to serve” (i.e., helping facilitate rural, manufactured and affordable housing). “They’re really just complementary to our goals, I would say, and we really didn’t roll anything out that was platform-changing.”

“If there’s one theme that runs through [our recent work], whether it’s low-income housing tax credits, small balance loans or green bonds, it’s all in the context of:  ‘Are we doing the right thing to serve the mission?’ ” Hayward said.

Indeed, Hayward pointed out, the start of Fannie Mae’s green bonds program predated the FHFA’s lending cap, demonstrating that the institution didn’t take up that effort merely to get around the maximum.

“Our points of emphasis are things we really care about,” Hayward added.

But a string of initiatives on both Fannie and Freddie’s parts have nonetheless reshaped the contours of how the agencies approach multifamily lending. None of the changes are aimed at reducing their multifamily lending presence.

Across both agencies, Fannie Mae’s green bonds program has been, perhaps, the splashiest play on this front: The agency has been recognized as the world’s single largest issuer of fixed-income debt that’s put to eco-friendly purposes. In 2017, its issuance of green bonds and of green re-securitizations topped $31 billion, a total equal to 48 percent of the entire debt balance that Fannie Mae guaranteed that year. (Last year, the ratio fell slightly.)

But both agencies have also worked to broaden the scope of their multifamily activities.

In January, Freddie Mac did its first multifamily credit risk-transfer deal using reinsurance, a mechanism that allows the agency to reduce the amount of capital it has to hold for loans in guarantees. The tool is “allowing us to broaden our production capabilities on various types of loans that may be structurally more complicated or need longer time to aggregate,” Victor Pa, the institution’s vice president of investments and advisory, said in a press release at the time.

Proponents assert that boosts like that are a crucial service at a time when there’s a yawning gap in the availability of affordable housing across the country.

“[Fannie and Freddie] have observed what the market has needed and met the market,” said Sadie McKeown, the chief operating officer at the Community Preservation Corporation, a New York City organization that makes loans against affordable housing properties. “Allowing [groups like] CPC to grow and bring our own unique niche to the market—and providing capital for us—is something that they both have been intentional about.”

“I think it’s critical, especially right now, as you hear about the housing affordability crisis that we’re in,” Harrington said of Fannie and Freddie’s active role in financing multifamily assets. “It’s crucial that there’s someone in this role that’s able to champion [affordable housing] and try to come up with programs to help with the crisis.”

But critics argue that the GSEs have merely shown a growing appetite, in fact, to crowd out private capital.

“That’s problem number one,” Edward Pinto, a fellow at the American Enterprise Institute and the former chief credit officer of Fannie Mae, opined. “[The agencies] are not needed.”

Pinto noted that the national volume of outstanding multifamily debt has increased 43 percent since the beginning of 2013—a rise that’s reduced to 33 percent when inflation is accounted for. By contrast, the number of households who live in apartments has risen only 8 percent over that period. That disparity suggests that the average housing unit has become saddled with much more debt than it had five years ago.

Fannie and Freddie have been key contributors to that dynamic, which Pinto considers destabilizing, the former GSE executive said.

Destabilizing or not, the agencies have found a growing list of ways to bolster their activity. In February, Fannie Mae doubled the upper limit of the dollar size of loans that are eligible for guarantee under its small-balance loan program. The move, which increased the cap to $6 million, served to mimic the structure of Freddie Mac’s competing program, with the result of broadening the field of business that Fannie Mae could win in the space.

When it comes to small-balance loans, lower closing costs for agency executions mean that that agency debt is often the no-brainer choice.

“In round numbers, it’s going to cost $12,000 to $14,000 to close a small-balance agency loan, inclusive of lender legal costs,” Larry Wilemon, a lending executive at Walker & Dunlop, told Commercial Observer at the time. “On a conventional loan”—that is, one that exceeds the agencies’ small-balance threshold—“it’s more like $35,000.”

Fannie Mae has also placed a growing emphasis on rental assistance demonstration (RAD) financings—a transaction type that leverages a Department of Housing and Urban Development initiative to fund public-housing complexes with Section 8 money. In a company blog post published in November, Bob Simpson, the institution’s vice president for affordable and green financing, emphasized Fannie Mae’s commitment to the RAD business line, which Freddie Mac has been pursuing even longer.

“Our lenders are out there every day meeting and working with public-housing authorities,” Simpson told Commercial Observer. “It’s part of our mission to make sure we’re providing liquidity for affordable housing.”

Freddie Mac’s actions, on the other hand, have hewed more closely towards its efforts to grow its toolbox for managing loans and balance-sheet risk after origination. In addition to its risk-transfer reinsurance initiative, the agency announced last month its first private placement participation-certificates (PPP) swap deal, which lets lenders hand Freddie a pool of affordable-housing loans in exchange for Freddie Mac-backed securities that the original lender can then sell to investors. The deals are designed to free up capital for affordable housing lenders to make new loans, according to David Leopold, a Freddie vice president who works on affordable-housing multifamily lending.

“[PPP] is a trade of an illiquid mortgage for a Freddie Mac security, which is highly liquid,” Leopold told Commercial Observer. “It’s a way of applying existing technology to a highly focused objective: providing financing and liquidity to other financial institutions.”

Leopold emphasized the limited scope of the loans included in Freddie’s first PPP deal in May.

The programmatic changes may be incremental. But Willy Walker, who has led multifamily-centric lender Walker & Dunlop since 2003, acknowledged that there’s no denying the overall market-share trends over the last five years.

“The numbers sort of speak for themselves,” Walker said. But the agencies’ gains—set against a context of what he considers only peripheral changes to their business model—only emphasizes the quality of their work, he said.

“One would think that to expand market share the way they have, [Fannie and Freddie] would have had to do something very different,” Walker said. “For [Walker & Dunlop] to be able to win more bridge business, for example, we would have to either increase the leverage levels or we’d have to cut our pricing to be able to materially change our volumes.”

Despite program expansions, he pointed out, Fannie and Freddie have pulled neither of those two fundamental levers.

“All things equal, customers are saying they’d rather do [business with] the agencies than [with] someone else,” Walker said.

The expansion has occurred against the backdrop of a still-uncertain future for the mighty duo. Republicans have long taken a more skeptical view than Democrats of the place of a public guarantor in housing markets, and after the 2016 election, observers widely expected congressional Republicans and, more recently, Trump’s appointee to lead the FHFA, Mark Calabria, to take a harder line on Fannie and Freddie’s role. Calabria, a dyed-in-the-wool conservative who had served as Vice President Mike Pence’s chief economist, has been an outspoken critic of the agencies for much of his career.

But at his confirmation hearing in February, Calabria was surprisingly sanguine about the agencies’ place in apartment lending.

“Multifamily performed well during the crisis,” Calabria told a Senate panel, adding that he did not “think we need the same kinds of changes on the multifamily side that we need on the single-family side.”

Whether conservatorship persists or not, perhaps the giant elephants thundering through the apartment-financing markets are not yet endangered.

Update: A previous version of this story incorrectly identified the Freddie Mac executive who spoke about the agency’s first PPP swap deal. It was David Leopold, not Robert Koontz. It was also updated to clarify the context of remarks by Debby Jenkins and David Leopold.