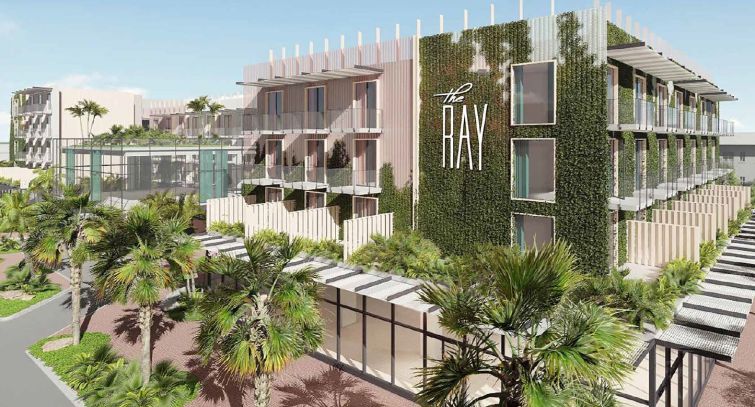 A rendering of The Ray hotel in Delray, Fla. Image: Madison Realty Capital

The loan, from Madison Realty Capital, will give Menin 24 months of funding with extension options to build a 141-room lodging, The Ray, about 50 miles north of Miami along Florida’s Atlantic coast. Hilton will manage the property once it opens for business, wrapping it into the fold of its Curio Collection brand.

The debt was arranged by Richard Horowitz of Cooper-Horowitz in New York City. Horowitz declined to comment on the transaction.

Menin, led by Craig Menin and Marc Yavinsky, bought the land for the hotel three years ago for $26.6 million. That purchase also included an adjacent plot that undergirds a 17,000-square-foot strip mall—Esplanade Plaza—which is still operational and further secures MRC’s debt.

“The sponsor is amazing, and there was a significant amount of cash that came in from [Menin],” Josh Zegen, a co-founder of MRC, said, describing the project as shovel-ready. “The collateral package was not only the hotel property but [also] additional adjacent properties, and we believe in the project they’re delivering here. There’s a void in the market for this type of property.”

When finished, the hotel’s grounds will be sprinkled with a collection of sculptures, and will also host an event space for up to 300 guests. There will be a 20,000-square-foot pool deck, and the food and beverage offerings will include a restaurant led by Korean chef Akira Back, who also oversees eateries in Las Vegas, Texas and California.

Menin’s current holdings include a strong showing of local Delray properties, including retail and mixed-use developments. Elsewhere, the sun-seeking firm controls retail and office assets elsewhere in Florida, as well as in Louisiana and Arizona. Company executives couldn’t immediately be reached.

Delray has grown quickly of late, seeing its population climb by about 14 percent between 2010 and 2017, according to census data. The area’s early 20th-century history includes the attempt of a Japanese entrepreneur to start a nearby colony for Japanese farmers at a time when there were relatively few immigrants from that country to be found anywhere in America. Today, Delray is home to a handful of a Japanese garden and a Japanese history museum.