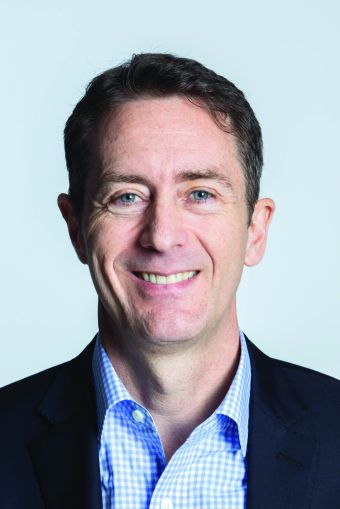 Before a new CMBS deal gets to the finish line of securitization, its issuer must pay a visit to the ratings-agency referees tasked with upholding the sector’s credit standards. That can be an arcane process. But issuers will find a friendly face in Kurt Pollem, who, since October 2018, has headed up Morningstar Credit Ratings’ CMBS division. After all, not so long ago, he worked on the business’ production side himself.

After a 10-year run rising through the ranks of Standard & Poor’s CMBS group during a period that spanned the 2008 financial crisis, Pollem left the ratings world in 2014 to get his hands dirty at Guggenheim Securities, where he co-led the company’s nascent conduit lending business. His next stop was Hannon Armstrong Sustainable Real Estate, where he was a managing director for a fund that churned out commercial property-assessed clean energy (CPACE) financings. (The deal type allows commercial landlords to borrow money for eco-friendly improvements and pay back the proceeds via a property-tax assessment.)

But the opportunity last year to lead Morningstar’s CMBS division pulled Pollem back into the world of ratings at a heady time for the firm. Late last month, it announced it would acquire DBRS, a large Canadian rating agency with its own presence in the CMBS market. And the rise of commercial real estate collateralized loan obligations has presented all the big agencies, including competitors like Moody’s, Fitch and KBRA, with challenges and opportunities in equal measure.

Commercial Observer spoke with Pollem by phone last week to discuss a career’s worth of perspectives bridging a diverse set of CMBS industry roles.

Commercial Observer: You worked in CMBS ratings at S&P for more than a decade before leaving to try your hand co-managing a CMBS conduit platform. What did that lending experience teach you about the industry?

Kurt Pollem: [Guggenheim] was a great experience, because it was just a small team of us getting to do everything. If you went to a bank, for example, it would be pretty highly siloed: You’d do underwriting, but you wouldn’t do pricing. I got to do all of that. So it was a lot of fun, and it was a lot of work. I got to be really deeply immersed in the lending side of CMBS.

What drew you back into credit ratings?

With Morningstar, I felt we just had an opportunity. Yes, we’re still very regulated. But I liked the culture that was here, and the entrepreneurial approach to looking at new asset classes and developing methodologies to rate them. Before I joined, I was a client of Morningstar on the CPACE side. I liked the idea of going to [what I thought of as] not just a ratings agency, but a business that had the opportunity to grow, evolve and adapt to the financial environment that we’re in.

For people who might have only glanced through a few pre-sale reports, what goes into rating a new CMBS deal?

In the CMBS world, the rating agencies will all look at a transaction on a preliminary basis, offer their ratings opinions, and then they may or may not be engaged to provide a final rating. And I think that’s still somewhat unique within structured finance ratings: that a fair amount of work goes into providing that feedback upfront. Our analysts spend a good deal of time re-underwriting the assets in those pools, and then conducting site visits, all in a pretty short amount of time. And then you’re putting together a pre-sale report, all in, typically, what is now about three weeks.

I don’t know if people can necessarily appreciate this unless you’re in the trenches, but [we] are subject to market forces and timing. And so we work really hard to hit the deadlines that are given to us by issuers. We have to meet those deadlines, and we do.

Morningstar published research last month arguing that upcoming debt maturities should perform even better than we’ve seen in the recent past. How has underwriting changed?

People do continue to point out the trend in [more] interest-only loans. When you look at the conduits we’ve rated, yes, they’ve been dominated by interest-only loans, but generally at lower leverage, which offsets that. Opinions vary, but that’s what makes a market. Then, mixed into that has been the view of the growing number of people who said that we were going into a rising-rate environment. I was not convinced that the rising interest-rate trend was going to continue, and actually, it hasn’t now.

But if rate increases are slowing because the economy is too, is that cause for concern?

Everybody has wanted to ask, “We could be going into a downturn. What does that mean for commercial real estate?” Logically, what it did mean for interest rates was that the Fed was going to react. And even just the anticipation of that—which the market is very efficient at front-running—has done really interesting things to the yield curve. I read a survey today showing that lenders [have gotten] more optimistic, in part because, hey, rates have stabilized and are actually going down.

If the market gets at all volatile, those deals get put on hold very quickly. But as things stabilized after December 2018, all of a sudden everyone’s jumping back in. It’s very much a hurry-up-and-execute approach. I think it’s challenging for any rating agency to be subjected to the ups and downs of that market, because CLOs do require more intense, in-depth real estate analysis. You have to scrutinize the business plan of the borrower and make a very informed judgement.

What are your team’s feelings about the deal to buy DBRS?

I think both DBRS and I, personally, have had to field some calls from issuers and investors. Of course, the question is, how does this impact the ratings? It’s just a little bit too early to get into the details, except to say that this is a great combination of two rating agencies that have the same mindset and entrepreneurial spirit. Everybody that we’ve talked to sees the benefits and the positives. So we’re excited, and I’d just say, stay tuned.