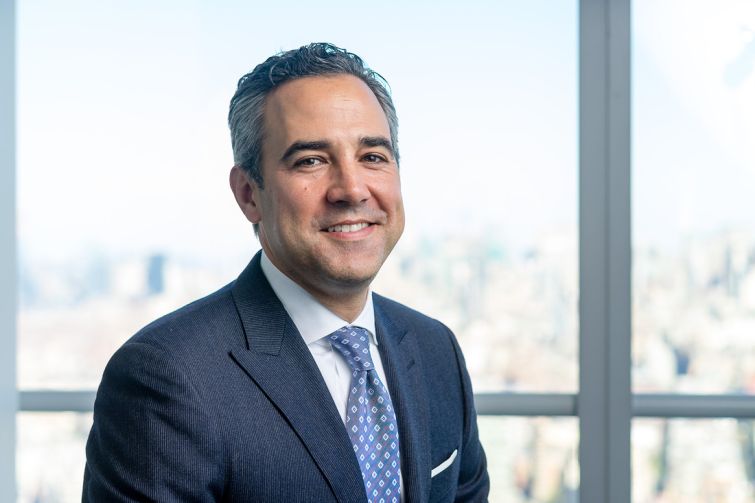 Jay McNamara is skeptical of cliché and easy narratives.

“Every newspaper seems to use the same picture [to illustrate] its story about the end of retail: the same escalators-with-snow-on-them picture,” McNamara lamented in a recent interview at MSCI’s World Trade Center offices.

It’s an attitude that suits his profession well. MSCI, spun off from Morgan Stanley in 2007, aims to help giant institutional investor clients by telling them the truth about their track records. It analyzes their portfolios and compares their in-house performances to specially crafted indexes meant to show what returns investment managers ought to be achieving, setting benchmarks for top executives to aim for.

It’s one thing to take on that role in public equities markets. But since 2017, McNamara has led the company’s new endeavor into real estate indexing, a far greater challenge considering the property sector’s stubborn opacity. Reflecting on his first year and a half on the job, the Brown Brothers Harriman alumnus gave Commercial Observer a field account of the uphill battle.

Commercial Observer: You came to real estate with fresh eyes when you began leading MSCI’s benchmarking efforts in this industry a few years ago. What initially struck you about how institutions invest in real estate?

Jay McNamara: If you look at it from the standpoint of institutional portfolios—from the money managers themselves—I was quite surprised at how casual they seem to be with the lack of transparency in the asset class; the lack of robust tools. They’re used to accepting some margin of error. Look, it’s a physical asset, and some people will suggest, “Oh, you’re from the outside, you don’t get it.” But you have to draw out from them what their pain points are and [ask], “What are you solving for?”

Give me an example of how one of those conversations might go.

[A client might say,] “Well, we’re trying to raise capital in Asia.” Or, “We’re trying to expand our footprint in a particular area.” We’re there to answer questions such as, what’s out there? How does the investment diversify? What’s the upside? What’s your competitive advantage? I believe that the industry hasn’t seen someone like an MSCI before. This industry is not global, like the public equities are. It’s still very regional at best, and not very transparent. But I do believe it will change.

What’s the source of your confidence that investors are hungry for better data?

We have deep relationships with the pension funds, the foundations, the endowments and the sovereigns from our other business lines. We’ve said to them, “If we could give you a solution that gave you better insight as to whether you’re making good or bad allocations in real estate, would that be a value?” And of course it would be a value.

And what exactly are you delivering to your real estate clients?

Our clients subscribe on an annualized basis, either to specific benchmarks or to our market data. And then periodically, we’ll say, “Look. Here’s how your fund performed. Here’s how the representative benchmark that you’re tracking performed.” We’ll go in and explain to them, “Hey, you got crushed here, because you were not in, you know, pan-European logistics.” Or we might be able to say, “You outperformed, because you were underweight versus the benchmark in pan-European logistics.”

And are you doing real estate data on a more granular level too?

We collect asset-level and property-level data as well as fund level. So that means we can look at the impacts of cash flow, and leverage and all these other things. That’s true insight, right? A lot of people will say, “Well, I know my portfolio. I know my properties. I already get it.” But oftentimes, if you’re running a $20 billion open-ended core fund—and some of our clients are—you might not see all those connections. That’s where we come in.

It sounds like some of that stuff might be just as useful to the SL Greens and Related Companies of the world as it is to big investment companies. Have you been selling in that direction at all?

It’s limited right now, but we’re starting to wake ourselves up to a multitude of other things we can deliver to investors in real estate. I can’t quite envision a world where I’m giving a commercial real estate broker at JLL, something on an iPad. But increasingly, if there’s a byproduct [we have] or something we wrote that could be useful, someone like Thor Equities or whatever might say, “Oh, that’s interesting.” Our ability to deliver solutions beyond just giving you a benchmark is the big value proposition and transformation that’s underway right now.

Speaking of which, you’ve started publishing research on real estate that you disseminate widely. Is that at cross-purposes to your mission to do proprietary research for individual clients?

My dream scenario is that when we put out one of our research pieces, a chief investment officer or CEO reads it and calls his underlings and says, “Get the MSCI guys in here. I want to know how this impacts my portfolio. I want to run this against some of the ideas that our strategy team has.” That’s how it works.

From your conversations with the big institutional real estate investors you work with, what’s the market sentiment out there right now? What are people looking for answers about?

What we’re seeing is that the big institutions—the sovereign wealth in the Middle East, the big Canadian plans, the big Dutch pension funds—they’re doing more and more co-investing or direct investing. They want more control. Obviously, fees play a part. But we’re seeing the big guys actually having large teams, doing [this themselves]. I mean, Hudson Yards is just up the West Side Highway—you’ve got Oxford as a great example of a Canadian pension plan [directing its own investments]. So one thing we’re seeing is that the vehicle through which investors are gaining the exposure is changing.

What about globally? What’s the biggest story your clients are following abroad?

In the U.K., you can see some of the impact that Brexit is having. But all in all, rising rates—maybe that’s slowing. And you have JLL buying HFF, so they’re clearly a big believer [in the business cycle], right? What we’re seeing, if you look at institutional portfolios on our platform, is that they’re increasing allocations. And they’re increasing for a multitude of reasons.

Right. So, does it give you any hints as to what’s driving this never-ending investment cycle?

One of them is the most obvious: If you’re a pension plan with a big funding gap, you’ve got to close that gap fast. If public equities and fixed income aren’t going to yield what they yielded in the last decade, you’ve got to go find yield somewhere. And so, you see these enormous allocations growing in private equity and private real estate. We think that’s only going to keep going. You might sit there and say, oh, we’re in the seventh or eighth inning, depending on which sport you choose, but that’s the beauty of [our data]. We can say, “Fine. But guess what? Japanese insurers are increasing their allocation to real estate.” We know that [Japan’s] Government Pension Investment Fund, the largest pension plan in the world, with trillions of dollars, is now working with CBRE to get into private, unlisted real estate. And these guys have enormously long horizons.

It sounds like that plays pretty well into what you’re offering.

In days gone by, institutions would just say, “Well, I need real estate exposure, so I’ll just buy a real estate investment trust.” And then you had the old-line, unlisted real estate guy saying, “Well, that’s not really true real estate.” Fair, unfair—who knows. But today, you get these institutions saying, “I want to better understand my asset allocation. Am I getting value for money?” If you’re seeking an attempt to close the funding gap with a broadly diversified investment scheme, real estate just has to have a big portion of the non-public allocation. It just does, given the extent of the marketplace. And I’m starting to hear the rumblings that they’re not willing to accept the lack of transparency and the lack of analytics.

Do you find that there’s a lot of myth-busting to do?

Take investing in a sector like retail. Guess what? Amazon is crushing certain areas. But there’s still money to be made here. This is what our data and analytics are saying. So, we’ve done that [for our clients] from a sector standpoint. We’ve grounded it in actionable research.