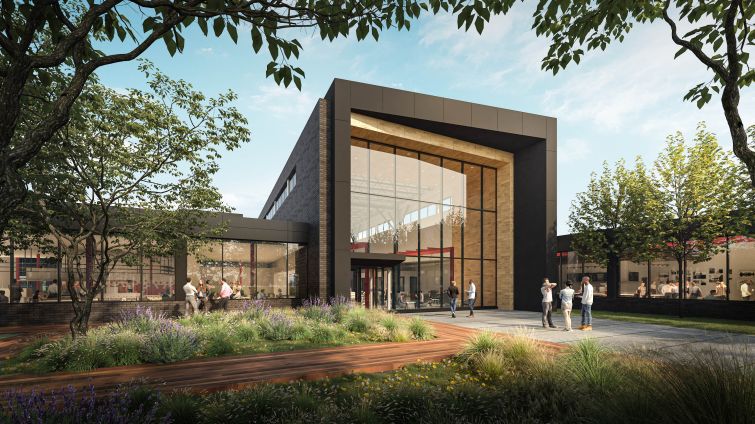 The deal gives Equator two years of funding for its office conversion project at 1001 Airport Boulevard in Morrisville, N.C., a town adjacent to Raleigh-Durham International Airport about halfway between the two North Carolina cities. The site was previously home to Morrisville Outlet Mall, a shopping center that lost many of its major tenants in the aftermath of the Great Recession. In the mid-2010s, a group of investors wanted to build a Chinese cultural center and a hotel on the property, but that idea fizzled, allowing Equator Capital and its equity partner, OCS Capital, to acquire the site last month for an undisclosed sum.

Their initiative will create a 245,000-square-foot office project designed by Gensler, an architecture firm based in San Francisco. Renderings show a glass-and-brick structure with a spacious central atrium surrounded by landscaped grounds that Knighthead said will include a lawn and a bocce court.

The deal marks the lender’s third investment with Equator after previous transactions that funded the company’s self-storage assets. Impressed with Equator’s wherewithal, Jonathan Daniel, a principal at Knighthead, said he was particularly wooed by the office conversion’s situation in a thriving area known at the Research Triangle.

“This location is spectacular,” Daniel said. “This is a repeat borrower of ours, and they have a really great vision for this market.”

Daniel, who said his six-year-old company will pass the threshold of $1 billion of capital invested within the next month, said Equator has already spoken to potential tenants, although he declined to name names.

“I could see tech, and I could see pharma,” Daniel said, speculating about the sectors from which the Airport Boulevard building could draw interest.

Named for three nearby research universities—North Carolina State University, Duke University, and The University of North Carolina at Chapel Hill—the Research Triangle is one of the biggest life-sciences centers of gravity in America: Pfizer, GlaxoSmithKline and Novo Nordisk all have a presence there. LabCorp, a medical testing company, and SAS, which makes software, have headquarters nearby, and foreign corporations with big outposts there include Toyota, Swiss agricultural firm Syngenta and ABB, a Swiss and Swedish equipment maker.