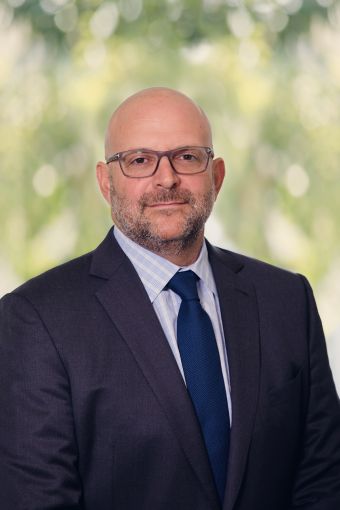 That was the question ping-ponging in Jonathan Daniel’s mind 25 years ago at his Syracuse University commencement as he mulled where to plant his flag post-graduation.

As fate would have it, his lending career has given him the chance to blend both sets of skills—getting his hands dirty studying properties in depth, while taking a cool, analytical approach to underwriting the cash flows that pay the bills.

The path he’s forged has been highly entrepreneurial. Not so long ago, his own small firm, Silo Capital, was beholden to capital raises from friends and family, producing loans that, at first, rarely topped six figures. But an association with Knighthead Capital Management, an investment advisory firm, spurred his endeavors along to bigger and better things. After eight years of collaboration, Daniel brought Silo under the Knighthead banner in 2013, co-founding Knighthead Funding, a more polished platform that’s allowed Daniel to spread his wings as a lender. There’s been much to celebrate along the way. The firm, which now focuses on respectably mid-sized commercial loans, looks forward to marking its billionth dollar of capital outlaid within the next month.

Earlier this year, as the weather began to hint at springtime, Commercial Observer snagged a Metro-North ticket to pay Daniel a visit at Knighthead Funding’s comfortable hilltop office in Greenwich, Conn.

Commercial Observer: What was your career path before Knighthead, and how did you get started here?

Jonathan Daniel: I’ve been in the real estate lending business for 25 years. In 2001, I started my own firm called Silo Financial, which primarily did bridge lending in New York City and the greater Northeast. Along the way, the founders of Knighthead Capital invested with me in a lot of my loans—although not through their funds, just personally. We started investing together dating back to 2005. And over the course of that time, between 2005 to 2013, they did a number of transactions, and the performance was good. Obviously, the way we worked together was great. They run a very large registered investment advisor where their focus is on stress and distressed credits. But they thought this type of investment vehicle would be compelling. It’s senior debt at conservative leverage points and with really attractive risk-adjusted returns. It was great for me, because I used to do my deals on a deal-by-deal basis, raising capital from family and friends. And now this just propelled us to an institutional level.

How has the type of lending you do evolved since you got your start way back then?

In the early 2000s, I was doing loans that could be between $500,000 and $1 million. And in 2005, when the Knighthead folks had started investing with me personally, our loan size grew substantially more to, say, the $6-million- or $7-million-per-ticket range. And now, ultimately, our average loan size is in the mid-teens. So it’s grown quite a bit. As a case in point, in December, we closed, in three weeks, a $36 million deal. We have a $20 million ground-up deal in Denver, we have a $34 million deal on an office property in Durham, North Carolina, and we still have some smaller kind of bridge deals in the $3 million, $4 million and $5 million range. Our focus still remains in that smaller middle-market space where we believe there’s less competition, but because of our relationships and our reputation, we’re starting to compete on larger deals now, which is really exciting for us.

It’s been one of the most competitive times in recent memory to grow a lending business. Has the timing been a challenge for you?

Well, it is competitive. The yields are still a bit better [for us] than when you get into the $50 million to $100 million range because of the size of the players and the amount of leverage those players use. But we’ve really grown year over year, so even in this competitive marketplace we continue to expand nationally. We just closed our first deal in Portland [Ore.] and last year, we closed one in Seattle. We literally got licensed in California last summer, and we’ve closed five transactions there and have two more in the pipeline. So I think the proof is in the pudding. I wouldn’t argue that it’s not competitive, but when you have the right team and when there’s certainty of execution—well, for some reason, people want to do business with you.

How does that manifest itself?

Not only are we getting repeat phone calls from one-off mortgage brokers and national brokerage firms, but we’re also getting repeat calls from our borrowers because they like working with us. Look: We’re the lender, they’re the equity. If the story goes right, they make much more money than we do. But that’s fine. We are here for what we perceive as a safe, risk-adjusted return. I mean, we’re picking our deals. We want everyone to succeed. And I think that’s sort of why we’re having a fair amount of success.

Plenty of very sizable banks are active in the same business segment as you are. How does their presence affect your game plan?

If we’re going to generalize, I’d say that for a large portion of deals, everyone wants to borrow from a bank if he can, right? The rate is going to be 3.5 percent or 4 percent, they’re going to have x as their fee, et cetera. But banks, generally—depending on whether it’s a community bank or a regional bank—are going to want some element of recourse, and the proceeds are going to be less than what we’re able to do. I would gather that banks are roughly in the 60 percent to 65 percent [loan-to-value] level on construction deals, with full recourse. Separately, banks love dealing with their largest clients. So if you have $10 million sitting in a bank account and you’re a third-generation real estate family, you’re likely going to go to the bank, because the bank is basically lending you your own money. But everything else, especially for the smaller middle-market developers, they may be syndicating equity. They may be in a 90-10 partnership. They don’t always want to go on the hook. What we’re able to do is give 70 percent to 80 percent [loan to] cost.

As Knighthead grows into more of a national role, how do you get comfortable lending on the other side of the country, in places like Denver or Seattle?

That’s a great question, because we think there are tremendous opportunities all over the country. We love Denver, we love Texas, we love Florida and Atlanta. So we want a diverse portfolio. How do we do that? By splitting our platform by originator into certain regions. That has a lot of benefits. Not only are the same people dealing in the same markets continuously, but they’re building relationships. It’s a bit of a learning curve, but at the end of the day, we’re underwriting the deals the same way we would do it in New York City.

What are the biggest challenges in your slice of the market—say, in the $10 million to $30 million range?

You have to be able to pick your spots. I think the markets are priced to perfection right now. There’s a lot of capital on the equity side, and there’s a lot of capital on the debt side. But I do believe a lot of the capital out there is not looking for the $20 million to $30 million loan. When the Blackstones of the world raise a fund worth tens of billions of dollars, they can’t focus on the $20 million, $50 million or even $100 million deal. So I think we are finding those in-between guys. [Borrowers] get comfortable in the fact that the [debt brokers] bringing us the deals have closed with us and seen how we execute.

Do you have any concerns about business plans you’ve seen get funded in the bridge space?

I’d be lying if I didn’t tell you we see deals we think are interesting, and then lose the deals because there’s some other lender that’s lending substantially more money than us—which I think is going to be very hard to exit out of. When you’re talking about where we are in the cycle, do you want to gamble on prices going up another 10 percent or 20 percent? That’s sort of not what we do. When we lose deals, it’s usually because of proceeds. And we’re O.K. with that.

How do you feel about where the real estate market is headed? Are we in for a volatile few years?

Real estate doesn’t move as quickly as the stock market does. You can’t just say, “I’m going to hit this button and sell the property today.” But I think that’s why many real estate people have been so successful. In times that are a little nerve wracking, they’re not able to push the button, which forces them to hold on. The next thing you know, you’re in recovery mode already.