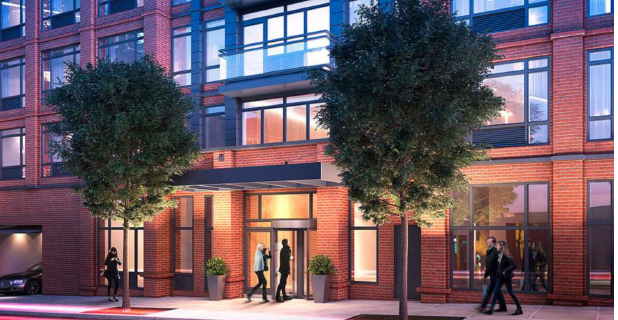 Bank Leumi, an Israeli lender based in Tel Aviv, has extended a $58.5 million debt package to Carlyle Group to refinance the owner’s rental building in Dumbo, Brooklyn, according to city property records.

The loans refinance $48.5 million in outstanding debt—which was also originated by Bank Leumi—and add a fresh $9 million mortgage on the property, 181 Front Street. The 12-story building is two blocks north of the Manhattan Bridge between Jay and Bridge Streets.

Acquired by Carlyle five years ago, the asset stands on a site that was once part of the Jehova’s Witnesses’ extensive Brooklyn real estate holdings. As the Witnesses dismantled their portfolio in the borough in the mid-2010s, they sold the Front Street property to Megalith Capital Management and Urban Realty Partners in 2013 for $30.6 million. A year later, Carlyle picked up the plot—as well as two adjacent addresses, 200 Water Street and 173 Front Street—for the same price.

The 181 Front Street lot formerly supported an industrial warehouse, but that structure was demolished to make room for the Aufgang Architects-designed apartment building. The 105-unit building has a mix of one-, two- and three-bedroom apartments and offers residents on-site parking, a fitness center and a rooftop terrace with views of the East River.

(Meanwhile, 200 Water Street, a former scouring-pad factory, has been converted into 15 condominium apartments.)

Twenty-one of the building’s apartments are rent-protected and were distributed in a lottery, as per Curbed.

Recent data showed signs of price fatigue among residential renters in Dumbo. In April, the neighborhood’s apartments were the priciest in Brooklyn, according to MNS, a residential broker. But the area was also, along with Downtown Brooklyn, one of just two neighborhoods in the borough that saw average rents drop last month.

Representatives from Carlyle Group and Bank Leumi did not immediately respond to an inquiry.