The Plan: The Wing Expands Its Flatiron Location 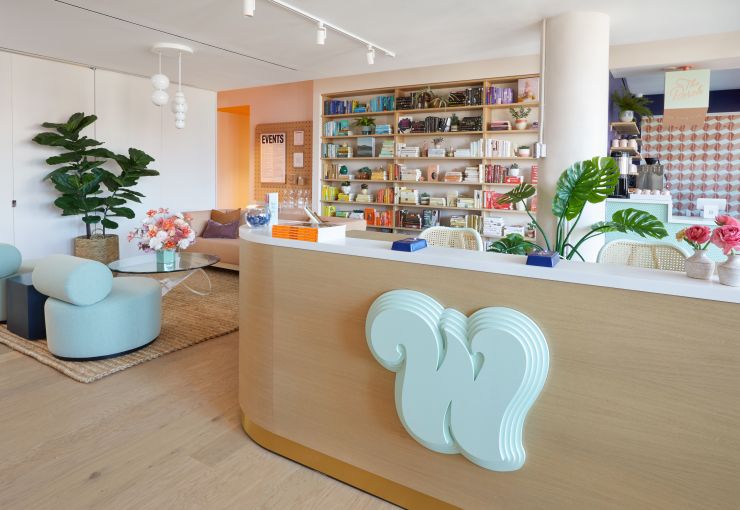 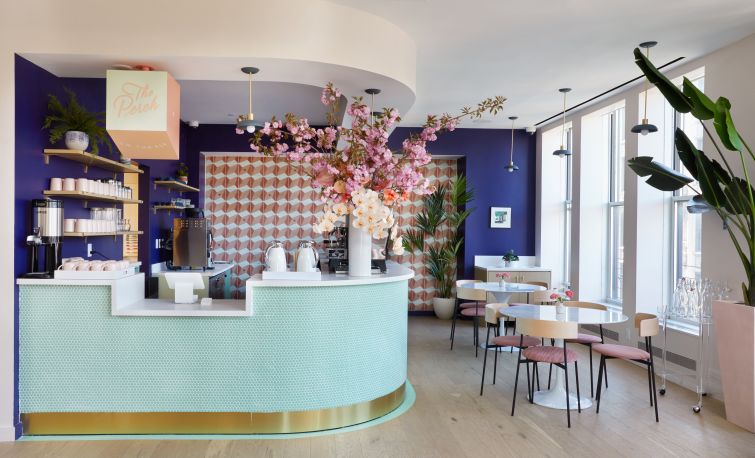 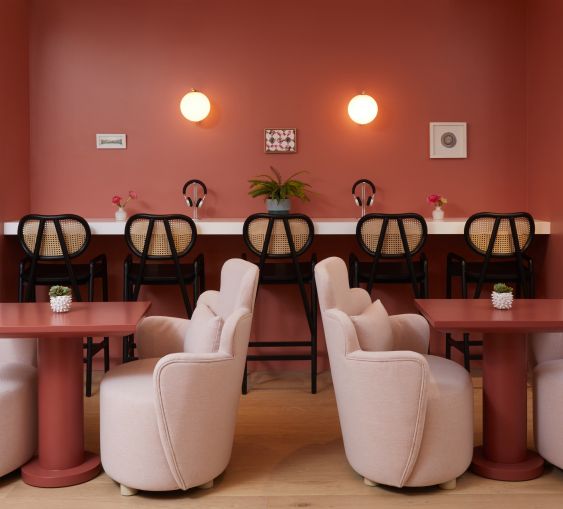 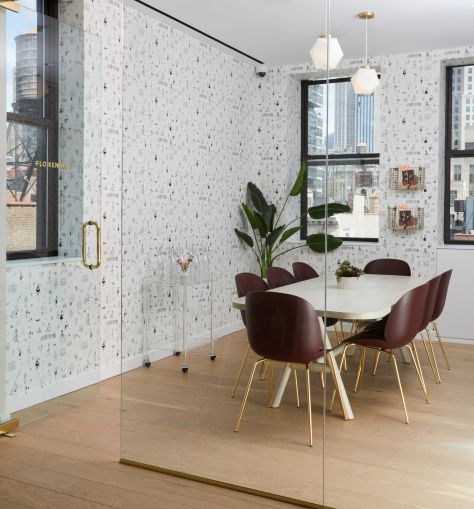 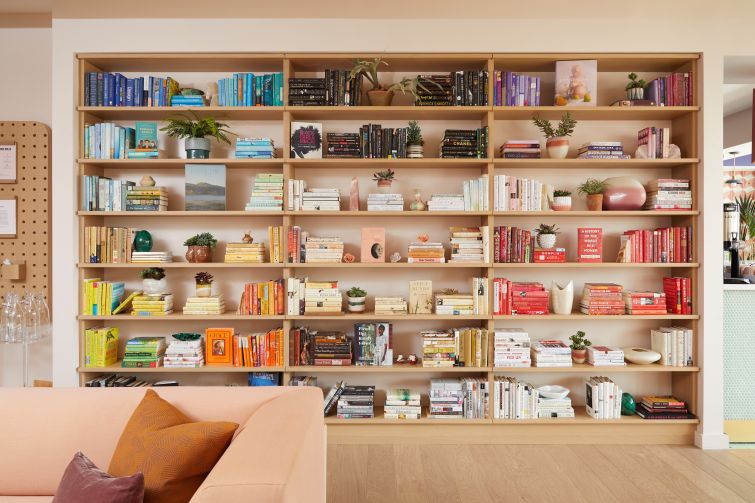 The second lending library is color-coded and has titles by and about women. Rebecca Baird-Remba 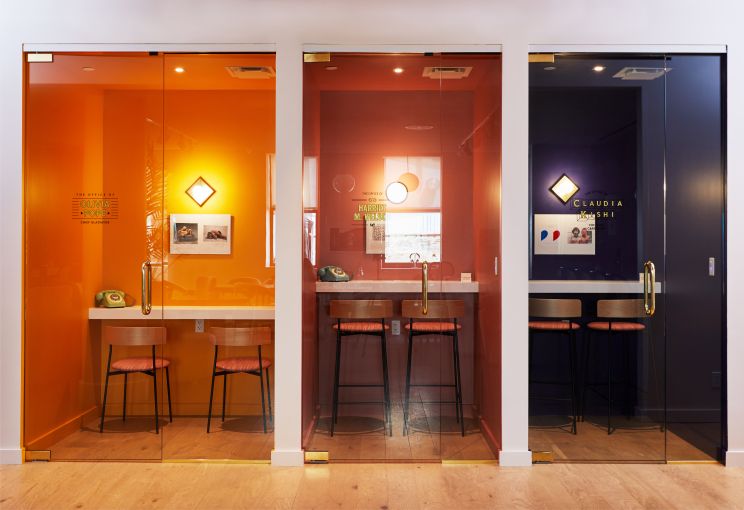 Yellow, rust, and purple walls for the new phone booths, which are named after fictional women. Photo: Tory Williams 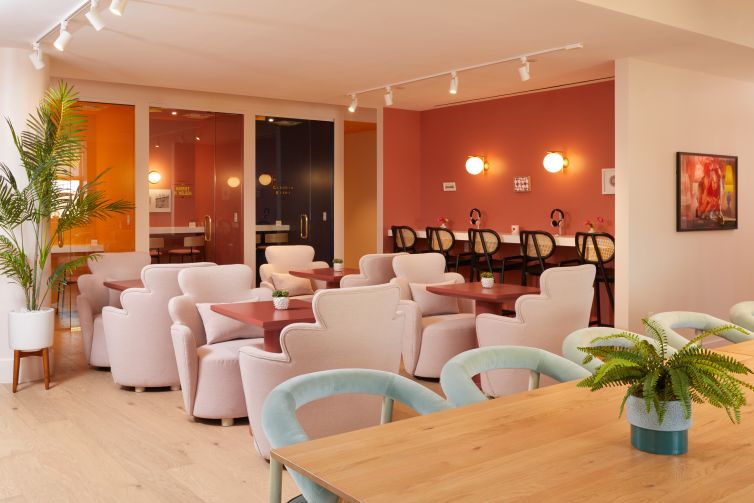 Another view of the new seating. Photo: Tory Williams 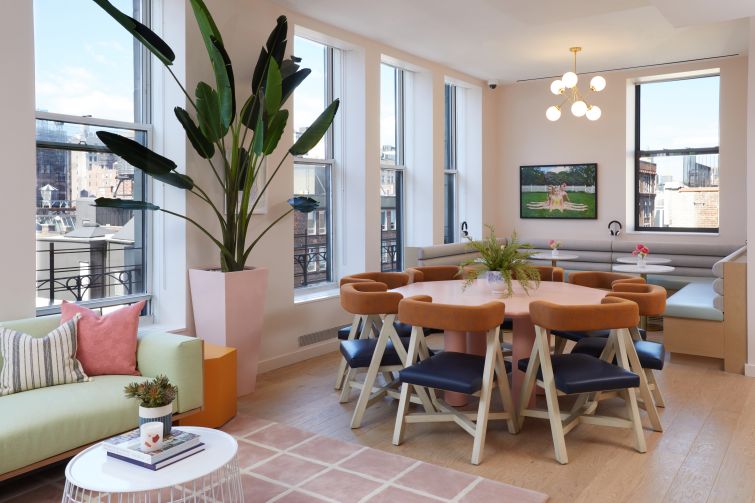 The Wing's new head designer said the company was trying to elevate its palette and move away from millennial pink by incorporating rust, mint green and cool blue. Photo: Tory Williams
Previous Next

The Wing, a coworking provider and social club geared toward women, has continued growing across New York City and the country.

On the heels of a $75 million funding round led by Airbnb, WeWork and Sequoia, the two-and-a-half-year-old company has recently opened its first outposts in Los Angeles, San Francisco and Chicago, with a Boston coworking office set to debut in a couple weeks. Seattle, Toronto, London and Williamsburg, Brooklyn are also in the works. But Wing founders Audrey Gelman and Lauren Kassan opened their first location in a 12-story, Art Deco Flatiron loft building in October 2016.

Yesterday, the company opened the second floor of its Flatiron club at 45 East 20th Street, doubling its square footage from 3,500 to 7,000. In adding the 11th floor to its existing 12th-floor penthouse space, The Wing put in a new coffee bar with grab-and-go food options, three new phone booths (a growing trend among companies who want to mitigate the impact of open-plan workplaces), a private conference room, an additional bathrooms and shower area and a second lending library with titles by and about women. (The lending library is color-coded, with books arranged by color from cool to warm hues.)

The overtly feminist business has recently hired a new in-house team of three interior designers, who are trying to upgrade the brand’s style and create women-specific work spaces. Although the design of the new floor seems to follow The Wing’s original, twee aesthetic, head interior designer Laetitia Gorra said she was trying to move away from millennial pink toward bolder, more mature colors.

“We got feedback from our members on what they were using in our spaces, what they were asking for,” Gorra explained. “We created a lot more coworking tables, a private conference room that we didn’t have before, seats that were ergonomic. We actually custom-designed a lot of our furniture.”

“The custom-designed furniture is all very ergonomic,” she said. “The mean height of a woman is 5’4”. We’ve adjusted our seat heights and seat depths for women sitting in a coworking space for hours on end. We elevated our palette a little bit and brought in a little bit of rust and mint and cool blue.”

Indeed, the new coffee bar and food spot—dubbed “Perch on the Fly”—has a pale green, rounded counter and a dark blue accent wall, along with a custom clay tile painted with stylized “W”s in pale pinks and reds. Similarly, the new conference room has white wallpaper specifically made for The Wing, featuring sketches of women doing various activities in New York City, along with a white table surrounded by maroon and gold chairs. And the telephone booths—named for fictional characters Olivia Pope, Harriet Welsch and Claudia Kishi—are painted gold, red and purple, respectively.

It’s been about a year since the New York City Commission on Human Rights announced that it was investigating whether The Wing’s woman-only membership policy was discriminatory. A few months later, a man named James Pietrangelo sued the company, arguing that it had violated the human rights law in Washington, D.C. when it denied his application on the basis of his male gender. The lawsuit is awaiting a judge’s ruling in D.C. district court, but the commission has closed its investigation, according to a spokeswoman for the agency. And The Wing officially codified its membership policy last fall to clarify that it does not discriminate on the basis of gender. A spokeswoman for the company described its policy thusly:

“The Wing is a space designed for women with a women’s focused mission. Members and guests are welcome regardless of their perceived gender or gender identity. Recognizing that gender identity is not always consistent with someone’s sex assigned at birth, we do not ask members or guests to self-identify.”