Preaching the importance of eating healthy, while building and leveraging a "raving fan following," the popular salad chain is surging. 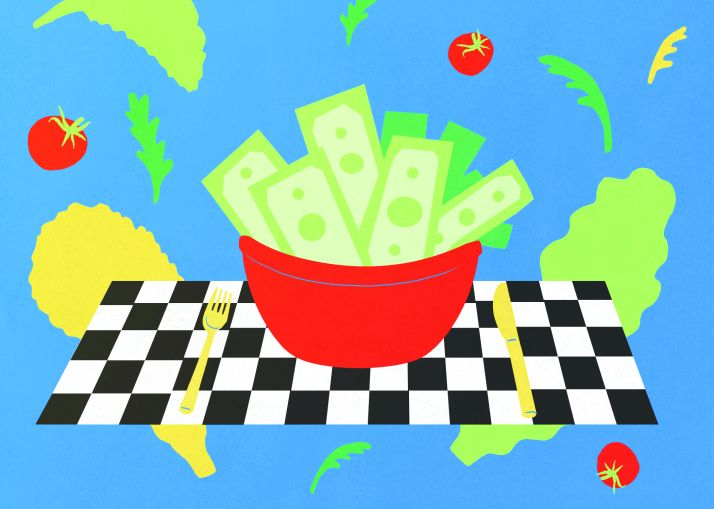 It takes a lot of ingredients to build a fast-casual restaurant chain toward a billion-dollar valuation. Few thought that lettuce would be one of them.

But offering up healthy greens is how Sweetgreen—the salad chain founded by Georgetown University classmates Nicolas Jammet, Nathaniel Ru and Jonathan Neman—got a $1 billion-plus valuation last November, after bringing in a $200 million investment from Fidelity and others.

Sweetgreen is now a health food monolith, with 91 locations in eight states and more on the way.

“They’ve done something profound, which is to take what, even 10 years ago, would have been viewed as a commodity and turn it into a brand,” said Kate Newlin, CEO and founder of Kate Newlin Consulting. “They have a remarkable ethos, a sustainable and powerful vision for the planet, for the consumer and for the company.”

Maintaining a style and image was central to forging their brand.

“They cared about the quality of the buildings and the design, and the landlords too,” said David Firestein, managing partner of SCG Retail, which has counted Sweetgreen as a client. “Both having a relationship with the landlord and the physical space were important to them. The presence was always very important to them. They turned down real estate that I thought was great, but they weren’t feeling it.”

To certain landlords, the brand was (at first) something of a mystery.

“In general, a good portion of the landlords didn’t know who they were,” Firestein told Commercial Observer. “The ones that did were usually landlords with a D.C. connection—people who had property there or kids going to school there, and they were excited to have them.”

What’s especially impressive is how Sweetgreen has parlayed this into such a gusher of stores despite higher price points than most of their salad competitors. The current delivery menu for its Wall Street store shows that Sweetgreen’s salads average between $12 and $13, with some outliers. The Rustic Tomato Harvest Bowl, with ingredients including blackened chicken thighs, shredded kale and goat cheese, goes for $13.25. The only salad under $11.95 is the Kale Caesar, a bargain at $10.95. By comparison, the Kale Caesar at competitor Chop’t ranges from $7.29 to $8.79.

But higher prices haven’t stopped the chain’s devoted millennial fanbase from waiting in line, sometimes down the block, for its healthy offerings.

“Food and beverage are often aspirational,” said Steven Kamali, CEO of Hospitality House. “People find themselves attracted to certain restaurants, services and companies, and the dollars and cents aren’t necessarily what they’re concerned with first.”

“What we may be seeing is the end of price being the only value that matters, because you’ve got different values here,” said Newlin. “Some of it is about convenience, and loyalty points and delivery to your office. They’re providing some services in the mix. But they’re also giving you a brand you want to brand yourself with, and I think that carries a lot of weight.”

Much of the company’s success goes to their marketing Sweetgreen as not just a place to eat but a lifestyle brand on a mission, often developing relationships with farmers in markets before even securing locations and basing menu items on their available inventory.

Co-founder Ru told The New Yorker in 2015 that their goal was to “raise a generation that understands the difference between cheap fast food and healthy fast food…People need to understand what their food is, but we also want to make it enjoyable and fun. We want to bridge the gap between health and convenience and be the ones on a more mainstream level to do that.”

In addition to high-quality ingredients, design and process have played a role in the company’s success, as customers are guided through the many potential ingredients by their salad maker as opposed to via a self-help assembly line.

“Hopefully, the first thing you see [when you eat there] is the open kitchen,” Ru told Business Insider. “Seeing the ingredients, seeing the kitchen and the process behind it is really important to us. We make all of our dressings, all of our products, from scratch every day, with produce delivered each morning, so it’s important to show our guests rather than tell them what we do.”

Sweetgreen has kept these guests on board by staying heavily tech-savvy and using various forms of technology to make themselves even more consumer-friendly.

Last year, the company launched Outpost, which delivers customized orders to kiosks located in various corporate headquarters, such as WeWork, Live Nation and United Talent Agency, for no fee.

“Our mantra is to meet customers wherever they are, so we can make healthy eating as easy as possible,” Neman, Sweetgreen’s co-CEO, told Forbes last November. “With Outpost, we’re meeting customers where they are and without a fee. This is about creating a solution, so we can serve a lot of customers.”

Sweetgreen has also emphasized digital ordering, with around half of their orders coming in via their website and their app, which has been downloaded by one million people. The company is also looking into ways to use blockchain technology to burnish their supply chain and increase transparency around their ingredients.

Convenience, tech savvy and quality are all critical, of course, but the company also didn’t shy away from other image boosting ventures.

Their “Sweetgreen in Schools” program, launched in 2010, educates elementary school students, often in low income neighborhoods, about healthy eating, even bringing them into the restaurant to see their philosophy in action. And from 2011 to 2016, the company ran its own music festival at Maryland’s Merriweather Post Pavilion called Sweetlife, with performers including Blondie, The Pixies and Kendrick Lamar.

Most astounding of all is how rapidly it’s happened. Sweetgreen was born in 2007 when college students Jammet, Ru and Neman, surrounded by fast food options, sought a healthier place to eat.

“The most delicious, accessible and popular food was generally the least healthy,” Jammet told the BBC. “We couldn’t understand why we didn’t have other options.”

The founders hit the local farmer’s markets and developed relationships with farmers, intending to source their store as locally as possible. They fed friends in their dorm room, getting feedback on various ingredients, and approached friends and family for funding, ultimately bringing in $300,000 from 50 different investors.

The first Sweetgreen opened in August 2007, three months after the trio graduated, and their little salad shop soon had lines around the block. Encouraged by their success, they opened two more locations—another in Washington D.C., and one in Maryland—a year and a half later.

As they continued to grow, significant figures in the worlds of both food and investing began to take notice. Chefs Dan Barber from Blue Hill—whose book The Third Plate, about smarter approaches to our food system, influenced the founders—and David Chang of Momofuku have done recipes for the chain. Investors, meanwhile, have included T. Rowe Price, restaurateur Joseph Bastianich, Honest Tea founder Seth Goldman, Shake Shack founder Danny Meyer, and Revolution Growth, the investment firm run by Steve Case, who sits on Sweetgreen’s board. The company even received an endorsement from Gwyneth Paltrow’s Goop.

As Sweetgreen grew, their youth and collegiate camaraderie made some wonder if the three were for real.

“It was unusual, and quite frankly, a concern,” Case told Inc. Magazine. “They were co-CEOs who shared the same office and, when we invested, at least two of the three shared the same apartment. On one level, it’s like, isn’t that sweet? How Kumbaya. On the other hand, when push comes to shove, how are decisions going to get made here?”

Sweetgreen’s continued success and steady growth soon alleviated these concerns. By the time the company opened their first New York store in 2013, it was their 20th store overall, and they had raised $35 million.

The company looked “at the city as a whole,” in terms of where they wanted to plant various outposts, said SCG’s Firestein. They signed their first lease in NoMad, and slowly began branching out to other targets.

“It’s not a shotgun approach, it’s planned out. They stuck with it and did a good job of it.”

Their New York presence continues to grow. Last May, they signed a deal to take 2,000 square feet on the ground floor of 10 Hudson Yards in a 10-year deal. Then in August, they signed a lease for their third Brooklyn location, taking 3,200 square feet at Two Trees’ 125 Court Street.

Last year, Sweetgreen saw the ultimate payoff to their successful branding as they received a $200 million capital infusion from Fidelity and others, bringing the company’s total of outside investment to $365 million, and its valuation to over $1 billion.

“For the first time in history, you’re seeing McDonald’s and Burger Kings close all over the city. I’ve never seen that before,” said Famularo. “And it’s not only the big names, but local hamburger shops, bakery shops. It’s because people are obsessed with their health.”