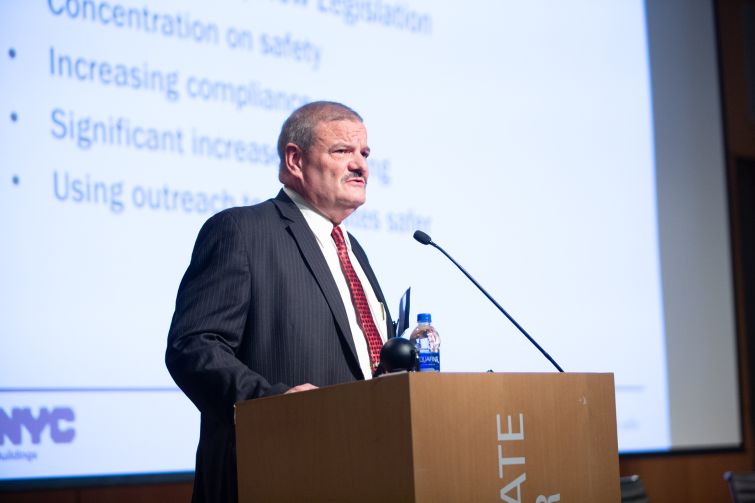 Sharp-edged tools, falling debris and dizzying drop-offs are among the obvious hazards at big-city construction sites. But devious marine mammals can represent an even more pervasive danger, according to Timothy Hogan, the deputy commissioner of enforcement at the New York City Department of Buildings.

No, whales and dolphins aren’t turning up on scaffolds. It’s all a matter of fraudulent worker training.

City law requires that workers on construction sites attend training classes approved by the federal Occupational Safety and Health Administration, Hogan reminded the audience at Commercial Observer’s first-ever Construction Safety Forum, held at the City University of New York’s Graduate Center in Midtown yesterday. And these laborers are required to carry cards that prove they’ve spent time in the classroom. But when Hogan’s inspectors visit work sites, they’ve often encountered workers with poorly counterfeited credentials—and the Department of Buildings is cracking down, he warned.

As a shot across the bow, Hogan showed photos of some phony cards to demonstrate how easy they are for his inspectors to ferret out. In one case, a sentence on a fake card stated—not without irony—that the credential should not be used for “fraudulent porpoises.” In other cases, glaring punctuation and typographical errors were enough to tip off Hogan’s inspectors that the knockoff certificates were not, in fact, good enough for government work.

Hogan’s department prioritizes going after the contractors who pass workers fake cards on the sly—not the workers themselves. In one recent example, a construction superintendent was caught with 66 falsified OSHA cards in his pocket. That supervisor is now being criminally prosecuted, Hogan said.

But even workers who do attend training might not be learning the right lessons. In another enforcement effort, Hogan’s team at the Department of Buildings asked trainers to send in their curriculums for review. Too many included incorrect or outdated material, according to Hogan.

The audience, chock full of construction executives, was chomping at the bit to reach the question-and-answer segment of Hogan’s talk. A handful of new worksite regulations, like Local Law 196 and Local Law 78, have passed the City Council in recent years, and bosses were eager to quiz Hogan with specific compliance queries. If an elevator installation subcontracting firm is working as part of a major construction project, do the elevator workers need their own safety supervisor? (Not if the general contractor’s designee is on hand, as per Hogan.) Does the DOB really expect the construction superintendent to be onsite whenever work is underway? (No—but if he leaves, he has to designate a properly trained stand-in using the site’s official logbook.)

Lest attendees were inclined to shrug off Hogan’s safety-minded enjoinments, he emphasized that noncompliance has consequences. Under his watch, the DOB has issued thousands of full and partial stop-work orders, he said. It’s also growing its staff responsible for inspecting work in occupied dwellings, in an effort to do random inspections of 10 percent of those work sites—not 5 percent, as is the highest rate possible today.

Too often, he said, glaring deficiencies lead to stupid mistakes. In some cases, his teams have visited sites where the workers don’t even have the building plans on hand.

“I don’t know how you build a building if you don’t have a copy of the plans of what you’re building,” Hogan grumbled.