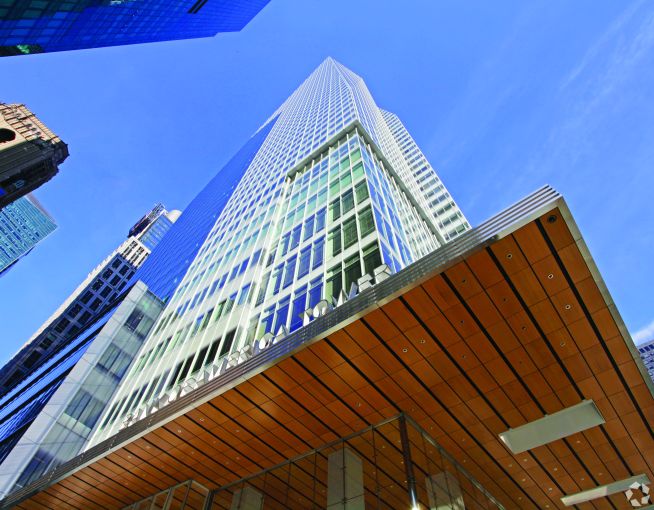 One Bryant Park was considered one of the city's most efficient skyscrapers when it was finished in 2009. New city legislation will force its owners, the Durst Organization, to figure out how to dramatically reduce their energy usage or face a $2.5 million annual fine. Photo: CoStar Group

After the New York City Council passed a landmark package of bills last month that requires landlords of midsize and large buildings to dramatically slash their energy usage, the real estate industry began scrambling to figure out how it can grapple with the city’s new and expensive standards.

Owners of residential and commercial buildings over 25,000 square feet will face the new environmental requirements beginning in 2024. The most impactful legislation in the nine-bill package, dubbed the Climate Mobilization Act, is a policy that will force landlords to reduce their buildings’ carbon emissions 40 percent by 2030 and 80 percent by 2050. The measure will impact the city’s 50,000 largest buildings, which account for five percent of its properties and consume more than half its energy, according to a 2016 report from the Mayor’s Office of Sustainability. If landlords fail to comply with the new energy efficiency and emissions standards by the deadlines, they can face significant fines that reach into the millions for large buildings.

Mayor Bill de Blasio celebrated the bills on Earth Day as part of his local “Green New Deal,” which aims for New York City to become completely carbon neutral by 2050 by reducing greenhouse gas emissions, cutting down on solid waste and transitioning the city power grid to renewable power sources.

Unsurprisingly, major real estate owners have largely come out against the regulations. John Banks, president of the Real Estate Board of New York, charged that the legislation “does not take a comprehensive, city-wide approach needed to solve this complex issue…The approach taken today will have a negative impact on our ability to attract and retain a broad range of industries, including technology, media, finance, and life sciences, that provide opportunity and continued economic growth that is so important for our city.” The powerful real estate trade group argued that it would cost building owners at least $4 billion citywide to make the renovations necessary to meet the emissions caps.

Durst Organization, which owns several million square feet of office and residential properties across the city, realized that one of its most energy-efficient commercial buildings will be hit with a $2.5 million fine annually beginning in 2024. When it was completed in 2009, Durst’s Bank of America Tower at One Bryant Park was considered one of the country’s most energy-efficient skyscrapers, earning a LEED (Leadership in Energy and Environmental Design) platinum certification when few others could. The 2.1-million-square-foot tower incorporated energy-saving technology that was considered cutting edge at the time, including rainwater recycling, an onsite cogeneration plant, automatic daylight dimming of office lights, planted green roofs and an air conditioning system that uses chilled water and ice to cool the building.

Jordan Barowitz, a spokesman for the Dursts, said that the legislation “punishes highly efficient and energy intensive buildings like One Bryant Park. Because there’s a hard cap, the more energy a building uses, the worse it scores. However, it doesn’t take into account the number of people that work in that building or what they do. A building like One Bryant Park that has 11,000 people working in it scores much worse than a building of the same size that has 5,000 people working in it.”

Ninety-five percent of the city’s one million buildings will be exempt from the emissions limits, which will be enforced by a newly created office of building energy and emissions performance. The bill gives carveouts to buildings with at least one rent-stabilized apartment, houses of worship, city public housing and city-owned buildings. Landmarked properties or those within historic districts can also get adjustments that allow them to meet less strict emissions standards. In addition, hospitals will be allowed to use more energy than other kinds of properties, because they need huge amounts of electricity to provide care 24 hours a day. Buildings smaller than 25,000 square feet will not be subject to emissions caps. Advocates and the bill’s sponsor, Astoria Councilman Costa Constantinides, claim that smaller structures will eventually be folded into the program, but it’s not clear when that will happen or how retrofits for homes and small commercial buildings would be financed.

Owners of rent-stabilized buildings will be expected to perform 13 energy-saving upgrades that don’t qualify as major capital improvements under the state rent regulation rules. That means the cost of the retrofits can’t be passed onto tenants in the form of higher rents. These low-budget updates include adding new lighting, insulating heating pipes and steam systems, repairing radiator leaks and installing sensors to track and adjust heating systems and boilers.

Activist groups that helped push the emissions bill over the finish line say that if the state legislature dramatically reforms the rent regulation system in June, tenants may no longer have to pay the price of building-wide upgrades. At that point, the bill could be amended to cover apartment buildings with stabilized units.

“What we’re gunning for is an overhaul of rent laws,” said Pete Sikora, the director of climate campaigns at left-leaning nonprofit New York Communities for Change. “It wouldn’t be fair to create standards for rent-regulated buildings because those costs would be passed onto tenants. I think there’s a very good chance that this problem is solved in June and the city amends this law.”

Despite the opposition from REBNY, engineering trade groups, unions and co-op associations, Sikora thinks the new environmental law is an absolute victory.

“We just won 45 to 2 against REBNY, the 800-pound gorilla of New York lobbying,” he told Commercial Observer after the City Council passed the measure on April 18, referring to the vote tally.

Besides the emissions bill, the City Council’s package of Green New Deal legislation included bills that require green roofs or solar panels on city buildings, created a new financing program for energy efficient building retrofits and renewable energy projects, and mandates the mayor’s office to review whether coal-fired power plants can be replaced by renewable energy sources. The Council also called for the state legislature to pass a law giving owners a property tax abatement of $15 per square foot for installing a green roof, which could help blunt the impact of the new emissions rules.

Questions remain about how the owners of the city’s largest buildings will reduce their electricity usage enough to meet the standards, which will hit the bottom 20 percent of the worst polluting properties in 2024 and then cover another 75 percent of buildings over 50,000 square feet by 2030. There are some solutions written into the legislation. Landlords will be able to offset 10 percent of their greenhouse gas emissions by purchasing renewable energy credits or carbon credits. Some landlords worry that increased demand for renewable energy credits [RECs]—which represent one megawatt hour of electricity generated by a green energy source—will cause prices for them to skyrocket, increasing the financial hardships for owners struggling to comply.

“The problem with renewable energy credits is that you can buy them now, but if you drive the demand for RECs outside of their supply, the price will go up,” said one landlord who preferred to remain anonymous. “You have to decide if the cost of buying the RECs might be greater than the fine.”

The city is also considering the creation of a carbon-trading scheme that would allow owners of more efficient buildings to sell their carbon credits to buildings that struggle to reduce their emissions. However, the legislation doesn’t specify when the system would be created or how it would be priced and regulated.

Many owners are hoping to lower their emissions by purchasing clean energy, typically hydroelectric or wind power. Last week, the mayor revived plans to build the Champlain Hudson Power Express, a 333-mile-long transmission line that would bring hydro power from Québec in Canada to New York City. But he said the city would buy up half the electricity from the line for municipal buildings, leaving 500 megawatts left over for private landlords, according to Crain’s New York Business. Real estate and energy experts feel that may not be enough carbon-free electricity to power the city’s large office buildings.

Malkin said that while his 8 million square feet of commercial properties don’t meet the new limits yet, he feels confident that ESRT will find a way to comply over the next 12 years.

“We have been approaching energy efficiency in everything we do since we started doing work at the Empire State Building in 2009,” he noted. “As we do work in chillers and heating systems, we’re already going for a much more energy-efficient approach. Every single tenant installation has to meet the standards for energy star for tenants.”

Richard Brennan, a partner at architecture firm HLW, said that there are two defining factors that govern energy use in buildings: mechanical systems like heating, cooling and lighting, and the building’s envelope and facade. Developers have a few options for improving the efficiency of a building’s exterior, ranging from replacing windows to recladding the facade entirely. Despite the mayor’s recent comments that glass-and-steel buildings are energy hogs, Brennan explained that triple-glazed windows can often be much more efficient than older brick or concrete buildings, which are often not insulated.

“When you try to insulate masonry walls, you have to be careful how water vapor transfers in the building envelope,” he said. “If you insulate a building the wrong way, moisture can build up inside the brick wall and if it freezes it can do real damage. In order to meet these stringent requirements, some fairly significant building science investigation will have to be done so [landlords and contractors] don’t damage the building.”

If an owner can’t completely reskin a building because it’s occupied, he or she may have to consider wrapping the facade in insulation in order to significantly reduce its energy waste.

“You could conceivably wrap a building by adding a few inches of insulation to the outside,” he said. “It’d be a shame if the city become an assembly of stucco buildings [because of this bill].”

He added that it will be particularly hard for older residential buildings, like co-ops, to perform the necessary energy-saving renovations to heating and cooling systems with people living in their apartments. In market-rate residential buildings, the cost of upgrades will likely be passed onto tenants in the form of higher rents. Some residential landlords may embrace passive house retrofits, which enable buildings to generate as much energy as they consume. However, retrofitting an apartment building to passive house standards is expensive and has been rarely undertaken in New York City. For new construction, however, passive house buildings with air-tight facades offer “a way forward that’s not a glass curtain wall.”

And owners will have to measure and assess their energy usage in more detail than ever before.