The Sweet Spot: How Dunkin’ Has Kept the Dough Rising Despite Retail Woes 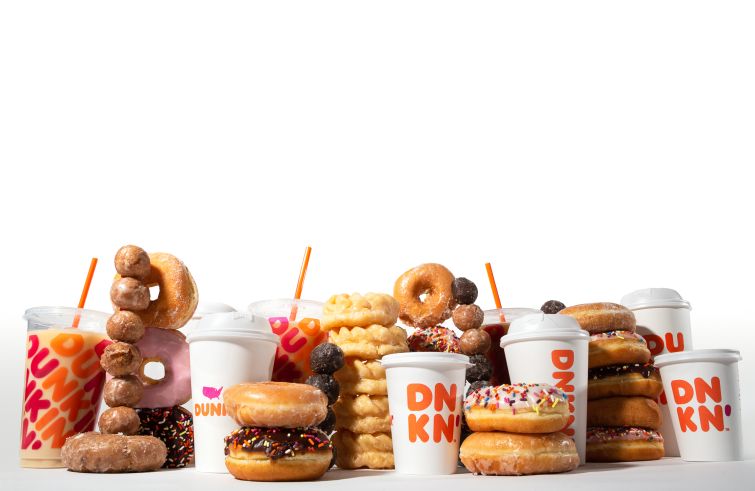 Dunkin', which has more than 600 New York City locations, has thrived even in a turbulent retail environment. Photo: Kaitlyn Flannagan/Commercial Observer

Through its franchises, the Canton, Mass.-based coffee and baked goods company has become one of the largest retail presences in the five boroughs, and there’s little end in sight to an expansion that is part of Dunkin’s plan to roll out approximately 1,000 more locations nationwide by 2021.

As of April, Dunkin’ had 639 locations in Gotham, including spots where a shop shares space with another vendor the company owns, such as ice cream seller Baskin-Robbins. Of these, 199 were in Queens, 168 in Manhattan, 143 in Brooklyn, 93 in the Bronx and 36 in Staten Island, according the company.

In 2012, there were 501 Dunkin’ locations in the city. The proportion by borough was pretty similar to today’s, though, with Queens having the most and Manhattan having the second most.

This 21 percent growth in the number of locations since 2012 has come during a decade when national chain retailers have generally reduced their New York footprints.

A record 124 national names registered a net decline in their numbers of city locations in 2018, according to the Center for an Urban Future—the most since the nonprofit think tank began charting the statistic more than 11 years ago. Most of the decline was in Manhattan, where the number of chain stores dropped 2.3 percent in 2018.

Meanwhile, Dunkin’ exited 2018 as the largest national chain retailer in Queens and Staten Island, and the second largest in every other borough. In Manhattan, the company had 166 spots, according to the Center for an Urban Future. Its only real competitors there and elsewhere in the city are its fellow coffee-and-pastry juggernaut Starbucks and cellular hubs from Metro PCS.

The report also marked the 10th consecutive year Dunkin’ has reigned as the city’s largest national retailer. How has it brewed such a footprint?

‘We can do everything’

Since February 2017, Grant Benson has been the senior vice president of franchising and development at Dunkin’ Brands Group, the donut chain’s corporate parent. Before that, he spent 31 years at the company in various capacities. He now leads a team of 10 in developing strategy for New York state, in which the city is the biggest market for Dunkin’.

That team includes director-level positions for development and construction and managers who work with franchisees on siting new stores and deciding which ones should be remodeled to stay on brand. The company remodels about 200 a year in New York state, Benson said in an early May interview.

He also said that Dunkin’s success in New York City hinges on long-term relationships with franchisees and strategic planning about where to put the city’s many, many shops.

“One of the beauties of Dunkin’,” Benson said, “is that we’ve got the opportunity to do a very broad and diverse portfolio. We can do everything from 3,000-square-foot freestanding buildings with drive-thru to [fitting] into 200 square feet with a limited-menu opportunity, maybe in a gas [station or] convenient location [or] maybe in an office building.”

To avoid over-saturation, Benson said the company remains diligent. That due diligence has less to do with finding the right retail rents or calculating out any other real estate costs than it has to do with managing geographic spacing and grand opening times.

“We don’t want to open locations that are going to unduly cannibalize an existing restaurant,” Benson said. “We would want the new locations to be taking new market share or taking market share from competitors as opposed to splitting sales from other [Dunkin’] restaurants.”

On July 9, 2013, Dunkin’ opened its 500th New York City-area store: a Dunkin’ and Baskin-Robbins hybrid at 323 West 42nd Street across from the Port Authority Bus Terminal.

The new spot’s franchisees were longtime business partners Rich Greenstein and Howard Novick. The pair has invested in restaurant chains including Smashburger and other eatery ventures.

They were drawn to Dunkin’ around a decade ago in part by the brand’s longevity—it dates from the late 1940s in Quincy, Mass., just south of Boston—and its relationship with franchisees such as themselves. They also saw New York City as underserved by Dunkin’ when they first reached out to the company, Greenstein said. The two now have 32 Dunkin’s in the city, and another 36 throughout New York State.

They’re neither surprised at Dunkin’s New York reach nor worried about over-saturation.

“The way it works in New York City,” Greenstein said, “people are really looking for convenience.

“We have stores on 37th Street, on 10th Avenue, Ninth Avenue, Eighth Avenue, Broadway, Sixth Avenue—think about that: You have Dunkin’ Donuts bars within a block of each other. You have six in a row practically, and yet all of them do well.”

The reason? New Yorkers are looking for convenience “above all else,” Greenstein said.

Dunkin’s growth spurt in the city is now around a decade old. Relationships with longtime franchisees such as Novick and Greenstein have in large part driven that market penetration to where the city is now one of the nation’s five most densely populated in terms of Dunkin’ stores relative to population. The other four cities are also in the Northeast.

The reliance on long-term relationships was not always the case early on—by necessity, Dunkin’ had to partner with new franchisees—but now relationships with those with longer track records mitigates some of the risk.

“We’re driven almost exclusively at this point in time by working our new growth with existing Dunkin’ franchisees in the market,” Benson said. “Occasionally, there will be an opportunity for a new franchisee to enter. But probably 95 percent of our growth is based on existing franchisees.”

As for the terms these franchisees operate under, the initial franchise fee is between $40,000 and $90,000, depending on the market, and the initial investment ranges from $228,621 to $1,717,103, according to the company. There are recurring royalty fees on gross sales and for advertising and a requirement that franchisees remodel their stores every 10 years. Terms for a Dunkin’ franchise agreement last 20 years.

In January 2018, Dunkin’ unveiled what it called “our next generation concept store,” in Quincy, Mass. It featured millennial-friendly touches such as the company’s first drive-thru exclusively for mobile ordering and digital kiosks fully integrated into the store’s operation. There was also a tap system for serving eight cold beverages at the same time.

A month later, Dunkin’ Brands Group rolled out what it dubbed its “three-year strategic plan” aimed at growing revenue by low to middle single-digit percentages and to realizing a net gain of about 1,000 Dunkin’ locations domestically by 2021, with the eventual goal of more than 18,000 (there were 9,453 as of the first quarter of 2019).

While the company said that most of those new stores will be outside of the Northeast, it expects the New York City proliferation to continue into its second 10-year period.

Benson said that as of spring 2019, his team would continue to use the same metrics and the same relationships in growing in the city, whatever the challenges that made other national chain retailers reduce their footprints in 2018—and whatever the oft-cited retail apocalypse that has seen off so many brick-and-mortar stores.

“Over time, our development pace has moderated to meet the needs of the marketplace,” Benson said. “So, we believe we’re in a healthy run right now in terms of the number of new locations and the number of incremental new units…We’ll continue to adapt as the market demands it.”

Dunkin’ will also lean on that innovation unveiled more than a year ago in the company’s Quincy birthplace. Millennials—the largest generation of Americans by sheer number—are coming into their own as consumers, and retailers well beyond Dunkin’ have found themselves selling a digital experience as much as a physical product.

“They’re starting this whole new program, what they call the next generation,” Greenstein said of Dunkin’. “We’re very impressed with what they’ve done as far as far as design, product development, marketing, and we’re confident they’re going to attract the next generation of users. That’s going to keep the brand very relevant and fresh.

“That’s another reason we’re prepared to invest a lot of money and open more stores.”