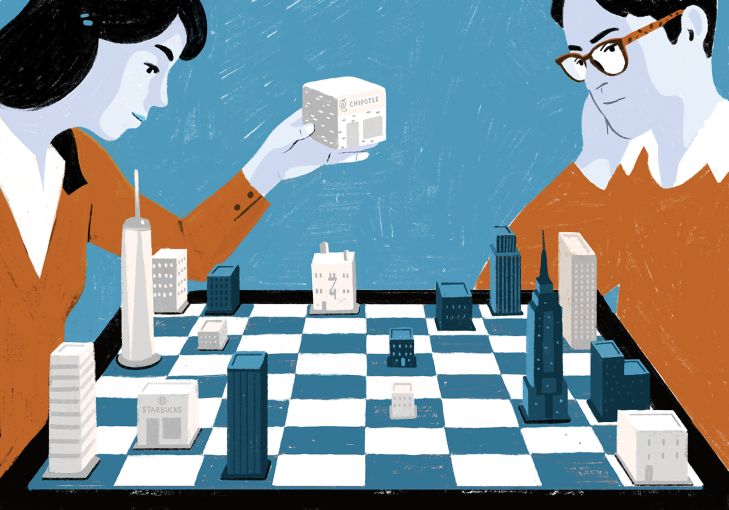 Stores can use data to refine their location choices more strategically than ever. Illustration: Ryan Johnson

In the old days, when a massive restaurant chain like Chipotle was looking to expand their purview, they’d look at Census data in a five-mile radius and start looking for vacancies—something that now seems ludicrous in New York City.

“A five-mile range in New York City is going to be in New Jersey,” Patrick O’Brien, director of analytics at Winick Realty Group, said with a laugh and a shake of his head. Some scouting methods are even more analog: “I still see those guys with a [foot-traffic] clicker out there,” he said.

But in 2019, in order to truly spot gentrification as (or before) it happens in New York City, Chipotle, for one, decided to take a deeper dive into the data. They enlisted long-term partner Winick Realty Group and its analytics department to take what Winick Executive Vice President Kenneth Hochhauser calls a “10-foot view within the marketplace as opposed to a 30,000-foot one.”

What Winick—along with many upstart proptech companies—is teaching clients like Chipotle is that in today’s market, the right real estate data is more than just a surface-level comprehension of the neighborhood demographics. It means understanding the import of cell phone tracking data. It means understanding social media geotagging or the effect of local Yelp reviews. Most important: It means being able to synthesize data from legions of sources to ultimately find their client the best location for their brand. For restaurants, which typically have the worst success rate in retail, this is critical.

When Chipotle asked Winick to suggest a new neighborhood for their restaurant using their proprietary data analytics, Hochhauser already had one in mind. He had recently worked for Columbia University in the leasing of their new Manhattanville campus and knew that many students were moving into Hamilton Heights and southern Washington Heights. But intuition or anecdotal evidence was not, obviously, going to be enough to push a major chain into uncharted territory.

“Chipotle was looking for empirical evidence that there is actually change, rather than saying, ‘Oh yes, there are changes happening in the neighborhood,’ ” Hochhauser said. “However intelligent and large they are, and whatever data sets they have available to them about their customers, they still rely on us for the last mile: the understanding of that particular marketplace.”

Winick analyzes everything from StreetEasy listings to New York State Liquor Authority applications to gain a complete understanding of the demographics as well as the area’s future appeal.

Winick began by charting population changes in the neighborhood. Millennials, who represent a large portion of Chipotle’s most devoted customers, grew over 20 percent from 2000 to 2014 in Hamilton Heights. They are also predicted, according to a recent CBRE report, to outspend all other generations on food and beverage within 10 years. College-educated residents, another core group of the restaurant’s business, increased a whopping 148 percent in the neighborhood over the same time period.

“With that increase in education comes a certain set of demands; consumption channels are going to change,” Hochhauser said. “There’s latent demand for better food.”

They continued by looking at real estate trends, where both one- and three-bedroom rents have been steadily rising since 2011.

“[Now], you have to earn at least $80,000 to enter into this marketplace,” Hochhauser said. “That is an absolutely brand-new cohort that would never have considered Hamilton Heights or Washington Heights South years ago.” Three-bedroom apartments are also an indicator of the neighborhood’s safety; the more of them being rented, the more likely it is that families feel comfortable living there.

In a brilliant move, Winick also combed through Yelp reviews of local restaurants, which had a pretty dismal average rating of 2.6. However, there were over six thousand reviews for the neighborhood, which indicates “a lot of vocal people who are incredibly underserved and not well-satisfied,” according to Hochhauser.

“So,” he said, “that’s the opportunity for Chipotle. It’s not just, ‘Hey, here’s your demographic and there’s vector degrees of growth going forward.’ You can also dominate your marketplace because there is no quality food and beverage choice today.”

Chipotle is currently in lease negotiations for its first space in the area, at 159th Street and Broadway.

Analytics departments at brokerages are not the only way restaurateurs are more accurately assessing a location, however. Two of the biggest players in the nascent proptech industry right now are LocateAI, which draws on a large geospatial database for its figures, and Placer.ai, which relies on cell phone tracking information to project an overall estimate of visitors.

“From day one, we hit the pavement hard,” said Joe Lee, co-founder and CEO of LocateAI. “We start by identifying true customer psychographics and trade area of every one of their locations, which we then use—along with A.I.—to locate the top markets and submarkets to enter.”

For restaurants, whose business model is rapidly changing due to mobile delivery services and morphing consumer preferences, Lee believes investing in software like LocateAI is mandatory for survival.

“The use of technology in the restaurant space is not just valuable, but existential,” Lee told Commercial Observer. “Restaurants that are proactive in getting ahead of these changes are far better positioned to succeed. Where LocateAI adds value is helping restaurants get the most fundamental item nailed down: finding the right location for its brand.”

Placer.ai provides a similar cache of information, which can include “where visitors are coming from, where they go after, how long they spend at the site and what a site’s true trade area is,” said Noam Ben-Zvi, co-founder and CEO.

“The key factor is that Placer.ai removes the guesswork by providing reliable and objective behavioral data. People vote with their feet, and we’re allowing businesses to understand how they’re voting in real time, across the country.”

For restaurants, specifically, Ben-Zvi predicts his technology will be beneficial in many ways.

“We see a lot of interesting use cases in the fast food industry, from determining whether a new franchise could potentially cannibalize traffic, to identifying the ideal location for a new branch,” he said.

Of course, any retailer—not just restaurants—can benefit from using data to determine their next storefront’s location.

“Understanding movement is the critical starting point to understanding how the world operates,” said Ben-Zvi. Any brand, from an artisanal soap shop to a national chain, will be more successful if they have a greater understanding about their intended customers’ habits or their locations.

But, “in spite of all this science, it is not about location, location, location,” said Hochhauser. “It’s about product, price point, management and location. If you don’t have the right product at the right price customers are willing to pay, with the right management to back it up, it doesn’t matter where you’re located. It could be on the corner of Main and Main and you’ll still fail miserably.”

A successful restaurant, however, is rewarded with more than just a thriving franchise in a new location. It could potentially reinvigorate an entire community.

“It increases everyone’s intelligence,” Hochhauser said. “It can open up new neighborhoods that are transforming, such as Hamilton Heights. That brings a whole change in quality of life to its inhabitants. It becomes almost a form of economic development at that point, which has cascading positive effects through their supply chain, their profitability and investment strategies.” And, in Chipotle’s case, the not-insignificant bonus of carnitas burritos.