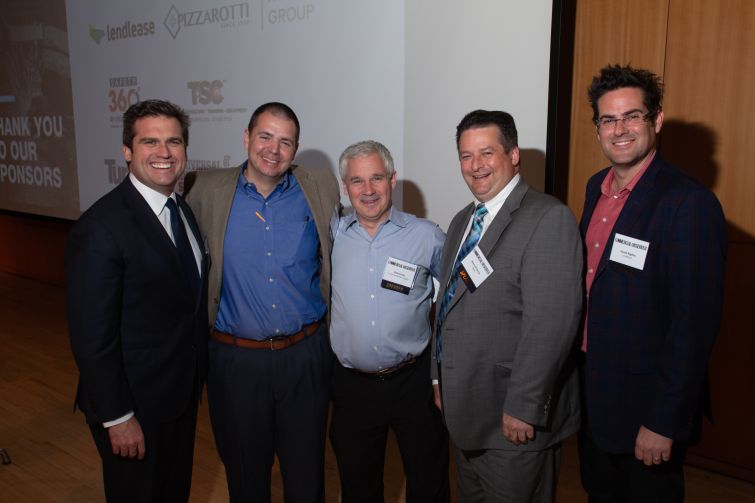 Construction safety has come a long way during the career of Mitch Konca, a New York City-based worksite inspector with the Occupational Safety and Health Administration.

But that doesn’t mean builders can let down their guard these days. Sixteen New York City construction workers have died on the job in the last year—a third higher than the rate five years ago, according to CBS News, which analyzed city data. And worksite injuries have risen 221 percent over that period.

As a result, panelists from major construction firms said they were turning to technology old and new to improve safety conditions for front-line workers—and to provide a few creature comforts along the way.

One important innovation, they said, has been the cocoon safety system, which wraps newly built exposed floorplates high above street level in a lightweight metal covering that prevents people and debris from falling off the edge. Chris Evans, the president of Universal Builders Supply, which makes the system, said that even the most intrepid construction workers appreciate the peace of mind.

“A lot of construction work occurs at height, but now, more often than not, you see an enclosure around the top of a building,” Evans said. “People are more comfortable now. They’re working more effectively, more confidently and more securely, and all of that puts them in a better frame of mind.”

The panelists, moderated by CR Safety President Matt Caruso, agreed unanimously that boosts to workers’ morale on the job could improve both safety and productivity. David Rigden, a safety executive at Lendlease whose British accent stands out against the industry’s decidedly Brooklynese enunciations, said that addressing workers’ most basic needs has been a priority for his firm.

The industry “still expects people to have their break and eat out of a lunch bucket, or maybe share some donuts. We’re still expecting people to use their energy drinks to get them through the morning,” he said.

Lendlease has been working on catering sandwiches and other lunches even on the high unfinished floors of skyscrapers, Rigden said, because workers on break don’t always have time to travel all the way to street level for food.

Lendlease is also trying to get bona fide toilets on every site as soon in the process as possible, sparing workers the indignity of using a Porta Potty.

“We’re trying to get rid of chemical toilets as early as we can,” Ridgen said.

William Gilbane, who runs the New York division of his family’s construction firm, Gilbane Building Company, acknowledged that even executives who wear suits and ties to work have a role to play in keeping safety in workers’ minds. After a week when three New York City tradesmen—not Gilbane employees—had died on the job, the executive ordered all his workers to observe a moment of silence.

“The number of craft workers who didn’t know that three people had passed away was shocking,” Gilbain recalled. “We really, as an industry, should be coming together to make sure the workers know how dangerous it is on the site. They’re not all reading the newspaper.”