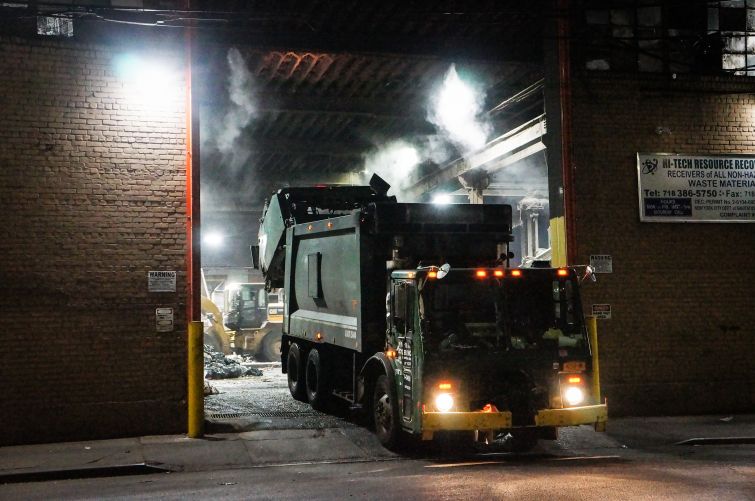 Commercial trash haulers have struck and killed multiple people over the past two years and have been exposed for unsafe labor practices. In light of this, City Council Member Antonio Reynoso has introduced a bill that aims to reform the private waste industry by creating an exclusive zone system for haulers.

Reynoso’s legislation calls for the New York City Department of Sanitation to split the city up into 20 or more zones, each of which will be serviced by just one waste hauler. Transform Don’t Trash, a coalition of progressive and labor groups that includes the Teamsters, the National Resources Defense Council and New York Lawyers for the Public Interest, has been pushing an exclusive zone scheme for the past few years. And after an investigative series from ProPublica detailed the cover-up of a worker’s death and the difficult labor conditions that workers face at private haulers, local politicians and city officials put the wheels in motion last year to reform the industry.

“A zoned system will make routes drastically more efficient—this means a reduction in vehicle miles traveled, meaning less greenhouse gas emissions and improved pedestrian safety,” Reynoso said in a statement. “In order to operate in one of these zones, companies must comply with stringent labor, safety and environmental standards. A commercial waste zone system is a catch-all solution that will finally transform this industry for the sake of workers, communities, and the environment.”

City Council Speaker Corey Johnson also supports the bill, arguing in a statement that it would produce “tremendous benefits for the city. The zones will reduce the number of truck-miles traveled each night by private carters by over 50 percent and achieve reductions in greenhouse gas emissions of over 40 percent.”

The proposal from Reynoso stands in stark contrast to the Department of Sanitation’s commercial waste reform plan, which involves 20 zones served by three to five waste companies apiece. The city’s non-exclusive plan, released last year, has been discussed at public scoping hearings and analyzed in a draft environmental impact statement over the past six months. No carter would be allowed to operate in more than 15 zones, and up to 68 contracts would be awarded to carters across the five boroughs. DSNY Commissioner Kathryn Garcia—who’s currently on a leave of absence to run the New York City Housing Authority—told Commercial Observer last year that the city policy would enable smaller carters to continue doing business by allowing multiple companies per zone.

“Our plan provides opportunities for a variety of private carters that are able to meet our high contract standards,” said DSNY spokeswoman Belinda Mager. “Plus, it does not leave the city vulnerable to a single large carting company that may fail in meeting its obligations or leave the market. Most importantly, customers overwhelmingly prefer a non-exclusive model, as they want the ability to shop around and fire their carter if their service needs are not met.”

Mager added that the DSNY plan would achieve the same goals as an exclusive zone system—reductions in truck emissions and better safety standards and training for workers.

Private haulers feel that the DSNY-backed effort would allow more trash companies to continue operating in the city than an exclusive plan. Commercial waste trade groups like New Yorkers for Responsible Waste Management oppose both exclusive and non-exclusive zones in favor of the current, open system, but they view the exclusive plan as a much bigger threat.

Tom Toscano, the CEO of Mr. T Carting and a vocal opponent of the city’s plan, recently told trade newsletter Waste Dive, “Exclusive is like being hit in the head with a bat and non-exclusive is like being punched in the stomach. If I’m forced to choose between the two, I guess I’d take the punch in the stomach.” Partnership for NYC CEO Kathryn Wylde, who represents a broad swath of local businesses and real estate interests, also came out against an exclusive system last week in an interview with Crain’s New York Business.

Meanwhile, the Real Estate Board of New York has long opposed any kind of commercial waste zone proposal on the grounds that trash pickup costs for landlords would increase, while owners would have fewer carter options to choose from.

“Exclusive waste zones would take away the ability of New York City businesses to obtain the high quality waste removal needed to keep New York streets and offices clean,” REBNY President John Banks said in a statement. “That’s why this approach was rejected by the de Blasio Administration in the first place. Sensible reforms must empower owners to select the highest quality service providers to ensure that  our buildings remain places where people want to live, work, and visit.”

Larger waste companies stand to benefit significantly under an exclusive zone system because they are more likely to score major hauling contracts. Despite widespread opposition to zones from most private carters, city’s two largest operators—Action Carting and Waste Connections—have both come out in favor of the exclusive plan in public testimony and interviews.

“The single model produces the greatest reduction in [vehicle miles traveled], safer operations, the highest potential for recycling, clearest accountability, easiest integration with other City services, and fair pricing,” testified Ron Bergamini, the CEO of Action Environmental Group, at a March public hearing on the DSNY proposal. “The alternative, a multiple model, would compromise all of these goals. This option seems no better than today’s while essentially creating 20 mini New York Cities.”