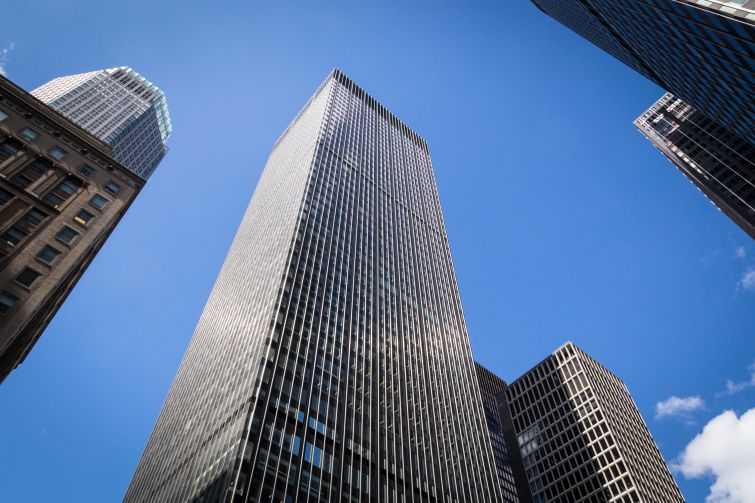 The City Council voted through a rezoning this afternoon that will allow J.P. Morgan Chase to construct a new 1,400-foot-tall headquarters building on the site of its current offices at 270 Park Avenue in Midtown East.

The financial giant will soon begin demolishing its 52-story, 1950s office building between East 47th and East 48th Streets to make way for a new 70-story commercial tower. Under the terms of the new zoning, Chase will build 10,000 square feet of public open space on Madison Avenue and create more than 35,000 square feet of pedestrian and transit upgrades.

In order to build its planned tower, the bank paid $208 million last December for roughly 667,000 square feet of air rights from Grand Central Terminal’s owners, TF Cornerstone and MSD Capital, according to public records. Under the rules of the Midtown East rezoning, developers who purchase air rights from landmarks in the district must pay into the public realm improvement fund, which will help pay for street upgrades and subway improvements in the East 40s and East 50s. Consequently, Chase made a $42 million contribution to the fund that will help pay for repairs to Metro North, widening streets and creating a new entrance on 48th Street.

“JPMorgan’s plans for 270 Park Avenue exceed the vision for East Midtown Rezoning,” said Council Member Keith Powers, who represents the area. “This development sets a precedent for what is possible for Midtown.”

Chase and its architects, Foster + Partners, argued last year that they needed to shrink the size of the open space because the train shed for Grand Central runs beneath 270 Park. But the local community board and Manhattan Borough President Gale Brewer urged the bank to build the 10,000 square feet of open space required under the Midtown East rezoning. Chase was ultimately able to figure out a redesign that incorporated the necessary public space in February.

Despite preservationists and architecture lovers’ vocal opposition, the current, 1.3-million-square-foot high-rise at 270 Park will be painstakingly dismantled by hand in the world’s largest voluntary demolition. The new Chase headquarters is expected to span 2.5 million square feet and generate 6,000 union construction jobs, both in the demolition and new construction. Work will start on the new building in January 2021.

The Council vote is the final step in the seven-month-long public review process for the new Chase building, which is the first to take advantage of the Midtown East rezoning passed in 2017.

“There’s no doubt about it, the Greater East Midtown plan is off to an incredible start,” said Marisa Lago, director of the Department of City Planning, in a statement. “With the City Council’s approval of this first project, we’ll see significant investments in New York City’s premier central business district—investments in public transportation, in streets and in sidewalks—by one of the world’s largest banks, which is also one of the City’s largest employers.”