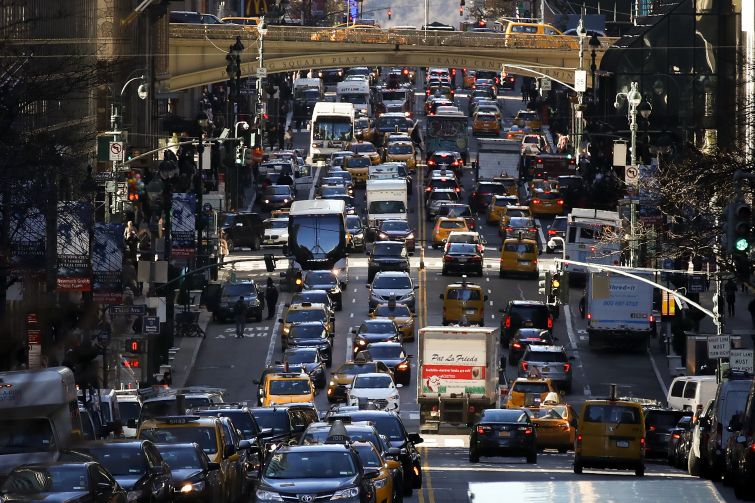 The state legislature and the governor have signed off on a new congestion pricing plan and an expanded mansion tax, which are expected to raise much-needed revenue for the MTA. Photo: Drew Angerer/Getty Images

Early this morning, Gov. Andrew Cuomo signed off on a $175 billion state budget that will impose a two new efforts to raise revenue for the cash-strapped Metropolitan Transportation Authority—a congestion pricing system in Manhattan and a transfer tax on residential and commercial properties that sell for $2 million or more.

The congestion pricing plan in the budget doesn’t spell out the actual toll prices, which will be determined by a state commission, but the legislation does specify that it will apply to Manhattan south of 60th Street. The FDR Drive and the West Side Highway will be excluded from the tolls, which will be activated by the end of 2020. The money will go into a “lockbox” for MTA capital projects, according to amNewYork, which reported that the plan could raise up to a $1 billion a year.

A six-person “traffic mobility review board,” appointed by the mayor and the MTA, will decide the tolls and potential credits for residents who live below 60th Street. New Yorkers who live in Midtown or Lower Manhattan and earn less than $60,000 a year will be eligible for credits toward the cost of the tolls. The board will also decide whether Manhattanites get charged for traveling within the congestion zone, newly anointed MTA Chairman Patrick Foye said during a press conference today.

Mayor Bill de Blasio supported the congestion pricing proposal, noting that “with a guaranteed lockbox for New York City riders, fairness for the outer boroughs, and exemptions for people experiencing hardships, I am confident this dedicated revenue stream will go a long way toward fixing the MTA’s broken subway system.”

The state legislature also increased New York City’s existing real estate transfer tax by 0.25 percent—to 0.625 percent from 0.4 percent—on commercial sales of $2 million or more and residential sales of $3 million or more, according to the legislation. In addition, the budget expanded the 30-year-old “mansion tax” on residential trades of $1 million or more. The amendment adds new tiers for pricier sales, starting at 1.25 percent for transactions between $2 million and $3 million and topping out at 3.9 percent for homes selling at or above $25 million. The tax applies to one-, two- and three-family homes as well as condominium and cooperative apartments. The governor’s office believes that the new mansion tax will raise $365 million for the MTA. The cash will go into the same MTA lockbox as the congestion pricing revenue.

The high-end residential market is already in a two-year-long slump, and the number of co-op and condo sales slid 5.2 percent year-over-year in the first quarter of 2019, according to The Wall Street Journal. Commercial and residential brokers agree the mansion tax expansion and the increase in the transfer tax will only further depress the city’s slowing commercial and high-end condo markets.

“It’s another nail in the coffin of New York City real estate,” said David Schectman, an investment sales broker at Meridian Capital Group. “He might as well hang a sign that says, ‘For-profit buyers should go elsewhere.’ Between 2 and 3.5 percent of the commercial real estate stock in the five boroughs changes hands every year. Because there’s less fervor from buyers these days, the net effect of the higher tax will mean less revenue next year, even though the city’s portion is higher.”

Nikki Field, a broker who handles luxury residential sales at Sotheby’s International Realty, had a more measured take on how the mansion tax would impact the high-end condo market. She said it was actually a relief after the alarm sparked by the pied-à-terre tax proposal, which promised an annual tax on all apartments valued at $5 million or more.

“It’s going to be easier to pass along as a one-time tax,” she explained. “What most of my clients were doing the last few weeks, they were halting – they saw this ongoing annual penalty as not only clouding their interest in buying in new york and [affecting] their profit margins. Now we can say this is the cost of buying the best in the best city, and in return you’re getting these added benefits.”

She added that brokers and developers flipped out when the mansion tax was first introduced in 1989, but the market quickly absorbed the additional cost. Even so, Field predicted that it will dampen pricey apartment sales over the next two years.

“It’s a challenging market,” she said. “With the economic uneasiness [right now], it’s causing a lot of people to think about whether they should stay in New York. It may have an impact on the local buyer; rather than downsizing here, those buyers may find another reason to buy in Florida.”

In a third major change, the governor, still reeling from New York City’s loss of Amazon’s campus, managed to slide a legislative power play into the budget to ensure the state senate can’t drive away another big economic development project. The amendment gives the gov the right to immediately remove a member of the Public Authorities Control Board—which had the final say over the Amazon deal—if they are “acting, or threatening to act, beyond the scope” of the member’s legal authority, according to the text of the bill. The move was clearly a shot at state Sen. Michael Gianaris, who threatened to veto the incentive package for Amazon after being appointed to the PACB earlier this year. The e-commerce giant ultimately walked away from the deal to build up to eight million square feet of office space in Long Island City, Queens, in mid-February, citing local political resistance.

“This is the broadest, most sweeping state budget that we have done and for the ninth straight year it was both timely and fiscally responsible,” Cuomo said in a prepared statement. “From making the property tax cap permanent to reforming and funding the MTA to making our criminal justice system fairer to fixing campaign finance, this budget head-on addresses the tough issues that have been facing this state for far too long.”