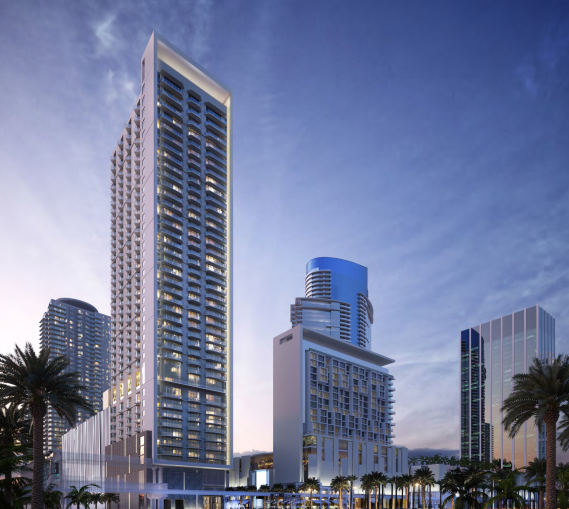 Zom Living and The Moinian Group have scored $142.5 million in construction financing for Luma at Miami Worldcenter, a 43-story luxury apartment tower in Downtown Miami, Commercial Observer has learned.

Moinian Capital Partners (MCP) provided the debt, which has a four-year term with a one-year extension option and comprises a $119 million senior loan and a $23.5 million mezzanine loan.

The company also provided 60 percent—or $23.7 million—of the common equity in the transaction.

Cushman & Wakefield’s Robert Given and Robert Kaplan, based out of the brokerage’s Miami offices, secured both the equity and the debt.

The developers are getting ready to break ground on the 434-unit property at 150 Northeast 7th Street. When completed, it will be a focal point of the 27-acre, $4 billion Miami Worldcenter mixed-use project, the largest master-planned development in the country after Hudson Yards.

“After successfully developing the country’s largest single tower residential development Sky, which includes over 70,000 square feet of cutting-edge amenities, we are excited to expand our presence in such a cosmopolitan city like Miami, and more specifically Miami Worldcenter,” Joseph Moinian, the founder and CEO of The Moinian Group said in prepared remarks.

Luma’s construction is expected to wrap in late 2021.

Since its launch in February 2017, MCP has focused on providing whole loan construction loans and mezzanine debt. “We also have the ability to provide some equity, as we’ve done on three or four deals to date, where we’ve filled up a piece of common equity in the capital structure,” Jonathan Chassin, managing director of MCP, told CO.

This financing ties in with MCP’s strategy of lending on assets and in markets where parent company Moinian Group has operational expertise; New York City and gateway cities such as Miami, L.A., Boston and Washington, D.C.

“At Moinian Capital Partners we like residential rental properties and we like gateway cities. This project—and the fact it’s part of Miami Worldcenter—really appealed to us,” Chassin said. “We’re building on the best site in Miami World Center, with unencumbered views of the water. There is the Brightline rail service—now Virgin Trains—two blocks north of our site and there’s a Metromover rail station actually on our site. That proximity to transportation really appealed.”

Luma’s units will range from 566 square feet to 1,808 square feet. Building amenities are set to include a wellness center with treatment rooms and sauna, a sundry shop, a speak-easy, a dog salon, a fitness club with classroom and a resort-style pool.

“Miami has historically been a condo market but its rental market is expanding, and we think it’s the future for Miami,” Chassin said. “As long as we’re delivering the highest-end product in the market, we’re very comfortable that we’ll be very successful in leasing it.”

“Zom builds properties in Miami like we build properties in New York. So we were very excited about the possibility of doing a deal with them,” Chassin said. “We just finished Oskar [Moinian’s luxury rental property at 572 11th Avenue] in New York and it looks very similar to the finishes at Zom’s Solitair Brickell building. So we’re excited to have a partner who thinks along the same lines as us and deliver similar products.”

It’s not MCP’s first foray into the Miami market. In January 2018 the lender provided a $36.8 million loan for the revamp of VOS Hospitality’s Greystone Hotel Miami at 1920 Collins Avenue, scheduled to open later this year.