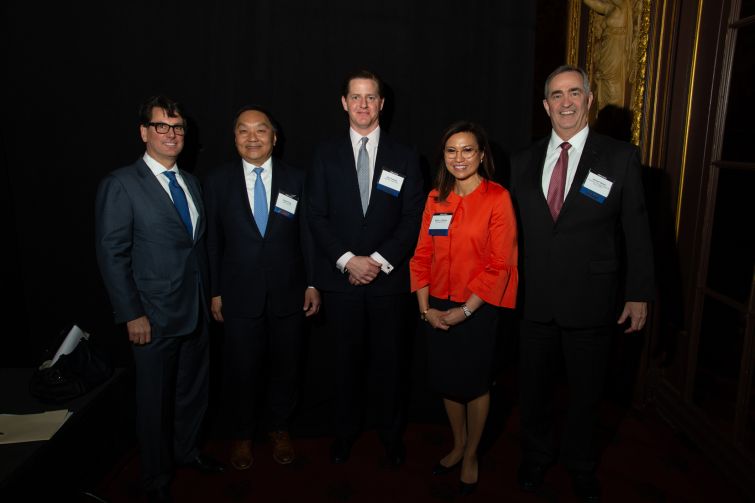 Jeff Fastov, a lending executive at Square Mile Capital, has frequently found himself traveling to South Korea to sew up foreign investment for American real estate deals—and a facet of Korean culture he’s encountered there serves as an apt metaphor for the overseas investment picture.

“If you stay at the Four Seasons in Seoul, they have a spa with contrasting tubs”, Fastov explained. One is kept hot and the other frigid. “It’s very bracing. If you go back and forth, you feel like a champ.”

That means that foreign investors’ appetites are as diverse as the continents.

Alex Foshay, the head of NKF Capital Markets‘ international capital group, noted that Canada remained a voracious presence in American markets last year—thanks most of all to one insatiable buyer that’s fast becoming a household name even outside the real estate industry.

“Canada invested $48 billion last year,” a huge proportion of the $95 billion that foreign entities plowed into American markets in 2018, Foshay noted. And remarkably, the Brookfield real estate companies were responsible for $40 billion of that Canadian total—more than 83 percent. With their acquisitions of big American companies such as GGP and Forest City Realty Trust, the behemoth from the north seemed keen last year to redouble its commitments south of the boarder.

Pan to Asia, on the other hand, and the climate was as disparate as Chinese characters are from the English alphabet. China, which just a few years ago was one of the most dynamic sources of overseas investment in America, has pulled back sharply as an investor in the face of the government’s restrictions on moving money out of the country. (The plan is designed to help stabilize China’s currency.)

Jerome Sanzo, in charge of real estate finance for The Industrial and Commercial Bank of China, said he’s dampened his loan book’s exposure to Chinese investors to keep his business insulated from the shift.

“Only a small part of our book is related to Chinese investors in the U.S.,” Sanzo said. “Real estate is not prohibited [by the capital controls], but it is restricted.”

The exception are companies based in Hong Kong, which is overseen by China but administered by its own more liberal government, Sanzo said. Otherwise, expect Chinese billions to sit a few rounds out.

“Personally, I don’t see the capital controls changing, but I don’t know that anyone can predict it,” Sanzo said.

Cross the Yellow Sea, and it’s a different story yet again. Fantastically eager Korean backers are precisely why Fastov’s been spending so much time in enjoying Seoul.

“Now, we have Korean investors in our construction business as well as in our value-add [strategy],” Fastov said. When American interest rates were exceptionally modest earlier this decade, “lower-yielding positions went away for a couple years. But now rates have gone up a little bit, and we’re starting to see [Korean] demand there,” the Square Mile executive noted.

Karen Ramos, a managing director at France’s Crédit Agricole who works on North American syndications, agreed, noting that some confident Korean capitalists have grown as feisty as America’s most aggressive debt funds on deals in the 50 states.

“Because they’re looking for yield, [Korean investors] are looking for assets that are not stabilized,” according to Ramos. That includes making mezzanine loans or buying b-pieces, she added.

In comparing to dashing plays like that, Ramos continued, European lenders’ proclivities are downright Victorian. Few are willing to back much else besides U.S. office projects in America’s 10 or so busiest cities.

“It goes back to the comfort level of the head office,” Ramos said.