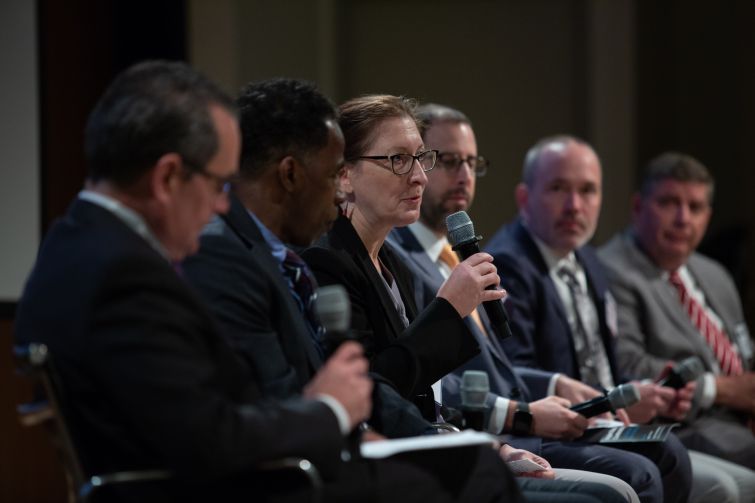 How many Massachusetts Institute of Technology faculty does it take to get a laptop to work?

Yesterday, from the stage at Commercial Observer’s third-annual higher education construction forum at the City University of New York’s Graduate Center at 365 Fifth Avenue, Higginbottom regaled the audience with the story of the time when he was giving a presentation at MIT and it took three people to figure out how to get the AV system to work.

“The room was too smart,” said Higginbottom, the director of higher education at SGA Architects.

He brought up this anecdote during a spirited discussion about the challenges in designing forward-thinking buildings. (He had been at MIT to talk about SGA’s passive house built last year at Wheaton College.)

The panel, moderated by John Pierce, the senior vice president of design and construction at Rockefeller Group, was about managing higher-education capital programs, development and large-scale renovations.

The group discussed the merits and challenges in using the design-build method, as well as other alternative methods. Jo Goldberger, the assistant vice president of buildings at the New School, whose work is primarily in renovations for existing buildings, said design-build is not usually the school’s first choice. “Generally, we’re forced into it if we have very tight schedules,” she said.

Aaron Aska, the vice president and the COO of New Jersey City University, whose school is publicly funded, said his institution recently made the switch from a low bid strategy to p3 (public-private partnership) for many of its projects because of legislation in New Jersey. As the COO, Aska said his job is to make the case that there can be a tradeoff between cost certainty and total cost of a project.

“P3 projects deliver faster but not necessarily most affordably,” Aska said. “We’re not just building because we love to build; my role is to look at the construction side, the finance side and the mission side.”

When the discussion turned to innovations in design and construction, Higginbottom discussed some of the ways his firm uses 3D modeling to help with the decision-making process, which can delay a project when there’s a hiccup.

That’s when John Puglisi, the associate vice president of facilities management at Fordham University, highlighted how important it is to take the owner’s capabilities into account when designing technologically advanced facilities.

“We just put up a law school, and it was a smart building, and I’ve been trying for the last five years to make it work,” he said. Someone accidentally painted over the humidity sensors, and whenever something breaks, they need specialized personnel to come and fix it, Puglisi said.

When you build a smart building, he said, “it darn sure better work, because you’re giving it to guys like me to operate.”

Emil Martone, the director of design and construction at Weill Cornell Medical School, backed him up.

“We don’t necessarily need every bell and whistle, we just need it to work,” he said. “Because we have to train everyone and maintain it.” Not only that, but when his team renovates a building, the cost to modify the controls is a third of the project, he said.

That is not to say that there shouldn’t be any bells and whistles, only that they need to fit the client’s needs and capabilities.

During a break, Karim Bhimani, an attendee from the facilities management software company Planon, summed up what he learned from the panel succinctly.

“Don’t over-engineer a building,” he said, “but engineer it for what you need.”

The day’s events also included a keynote address from Gerrard Bushell, the CEO of DASNY, and a presentation from Judith Bergtraum, the senior vice chancellor of facilities management at CUNY, on the school’s active projects.

The second panel dove more into the subject of innovation in higher-education construction with input from Diana Allegretti, the director of design and construction for Cornell Tech, the university’s new campus on Randall’s Island; Anne Papageorge, who oversees the University of Pennsylvania’s 15 million square feet of facilities; Paul Gurdack of Merritt Engineering; and Joseph Rigazio, the CEO of Talisen Construction Corporation.

Allegretti detailed the innovative aspects of Cornell Tech’s campus, including its use of solar energy and ground-source heat to power the Bloomberg Center. Papageorge discussed her department’s commitment to including more minority sub-contractors, and Rigazio said the biggest change he’s seeing is more innovation in the collaborative software space.

“The venture capitalists are throwing a lot of money on them,” he said of the companies in that space.