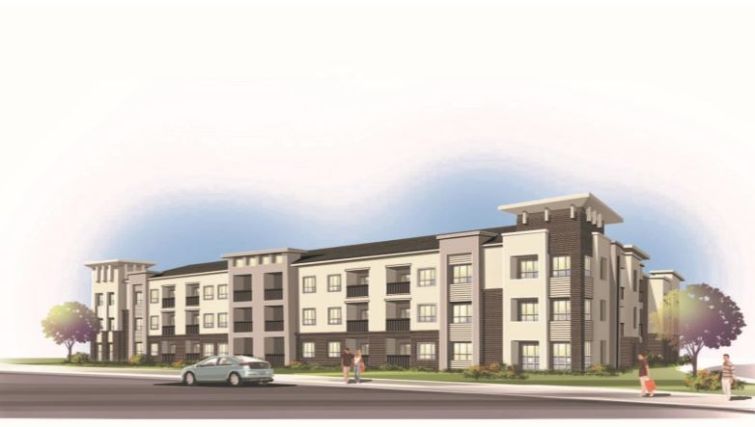 An artists rendering of aa building at The Vic at Southwinds. Image: Greystone

The FHA-insured debt is a ground-up construction loan that will convert to a 40-year, fixed-rate and nonrecourse permanent loan following the completion and stabilization of the planned asset. Greystone’s Jason Stein originated the debt.

Hunington plans to erect The Vic at Southwinds, a 265-unit, market-rate development at 1900 Kilgore Parkway in Baytown, which sits across the Burnet and Upper San Jacinto Bays just east of downtown Houston.

The complex will include eight three-story garden-style buildings that offer 1-, 2- and 3-bedroom units.

Amenities at the property will include a fitness center, an indoor playground, a clubhouse and pool, a conference room and business center, a beer garden, two dog parks, adjacent garages as well as parking for boats and recreational vehicles, given the community’s close proximity to the Galveston, Texas, bay area and the Gulf of Mexico.

The first residents are expected to move in during the Summer of 2020, sources said.

Houston saw 18,697 units under construction during the first quarter of this year, nearly double the number from a year ago, according to a first quarter CBRE report on Houston multifamily.

While Baytown, specifically, saw a 1.7 percent uptick in rent growth on the year in the first quarter, overall rent growth in Houston was subpar, dropping to -0.22 percent year-over-year and driven down by submarkets in central and southwest Houston, according to CBRE’s report. The brokerage attributed the fall, in part, to a short demand bump caused by Hurricane Harvey and to occupancy and concession figures that point to a supply overhang formed from the previous cycle of construction.

Officials at Hunington were not immediately available for comment.