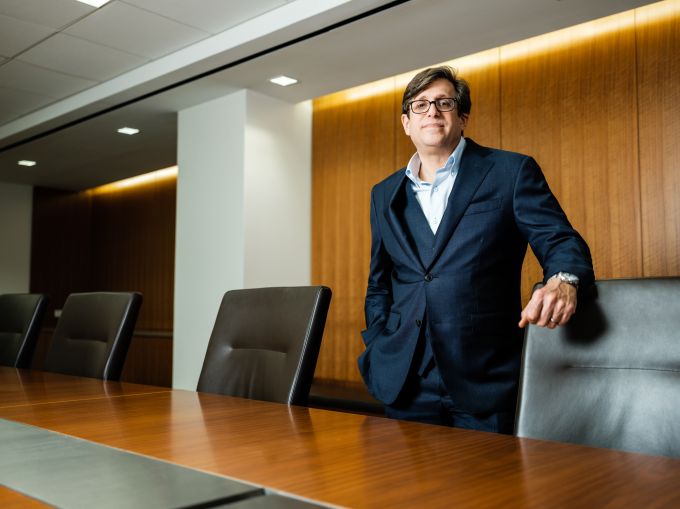 Cohen continues to manage his family's holdings in Midtown and Midtown South. He believes the city waited too long to rezone Midtown East, and now the market will suffer as a consequence. Photo: Chris Sorensen/for Commercial Observer

Michael Cohen, the president of the tri-state region for Colliers International (and not the Trump fixer), began his career as the heir apparent of a midsize real estate firm called Williams Real Estate. At the tender age of 23, in 1984, he started as a vice president at the firm, of which his father was president. Despite spending his career in management, the affable Upper East Side native has managed to walk the line between overseeing and growing his family business—which was ultimately absorbed by Colliers—and inking big deals for clients like Knotel, Signature Bank and SS&C Technologies. We sat down with the 60-year-old, married father of four in his Midtown office earlier this month to talk about his career, the properties he oversees and why the Midtown office market is struggling to regain its footing.

Commercial Observer: Where do you live?

Did you leave the Upper East Side at one point?

Where did you go to college, and what did you study?

I went to University of Pennsylvania back when it was easy to get into. In those days we called it the “bottom of the Ivies.” I was a triple minor, buried in the back of the book. “Don’t do this. We recommend against that. But if you must…” It was math, psychology and English.

But really, I kind of created my own minor around business because I took a lot of Wharton courses. I took economics, business law, real estate. Being a triple minor allowed me to dip into the Wharton curriculum quite a bit.

I understand you were the chairman of GVA Williams before it was absorbed by Colliers. How did you get your start in the business?

I joined the business right out of college and, in an act of sheer nepotism, was made a vice president and given a private office. And at the same time, I was given a phone and a reverse directory and told, “Go generate business.” My father was the president of what was then Williams Real Estate. About 10 years into that, the world started to globalize, and we had to develop a strategy to deliver brokerage services around the country, if not around the world. My father and his generation had accumulated a portfolio of real estate that they owned that consumed more and more of their time and responsibility. Over the next 10 years, we established a separation of responsibilities, where my father became more about running the family office, and I became more about running the brokerage company.

In 1994, I was appointed president of the company. Although my taking that responsibility, in truth, was a work in progress. I learned on the job and probably made every rookie mistake in the book. During this period in time, let’s call it the ’90s, real estate brokerage adopted a free-agency model, just like major league sports. We became a team that trained but did not retain stars. Many household names in the industry were recruited away from us.

So, as I watched that happening I said, “Wait a second, we have to learn how to be on the other end of this equation by playing the free agency market.” We started to attract and recruit experienced brokers who were not looking to work at a big international company and were still working for a local or regional firm that could compete in the big leagues but didn’t have the same bureaucracy, still had a family feeling to it. And that became our brand in the ‘90s and the first years of the [2000s]. We started to open offices in other cities. We had an office in Chicago, an office in Long Island, an office in New Jersey; we bought a firm in Boston; we bought a firm in Connecticut.

We expanded by using our own capital to acquire, and through affiliation, GVA became our brand, and we co-ran this global organization with this company called Grimley out of the U.K. Williams oversaw the U.S., and Grimley oversaw EMEA [Europe, Middle East and Africa], and things were fine. Then came the 21st century, and it became clear that the affiliate model was not going to endure. And that we couldn’t buy up enough offices rapidly enough without outside capital. So, we went looking for outside capital, and we ended up meeting with Colliers.

Colliers was the best choice to help us grow. And while they had an affiliate in New York, they were longing for a real company office that had the muscle that we brought to the table. So, we cut a deal with Colliers for them to buy an interest in the firm [in 2008] and for us to expand our US service platform.

What happened after the acquisition?

I took the position as CEO of the region for Colliers, but it was really a placeholder. What I aspired to do was to turn the day-to-day management of the region over to managers and, instead of being a player coach, be able to devote my time to my clients and to oversight of the family office within Colliers—which made me both the president of Colliers and Colliers’ largest client in the region. And that’s kind of what I do to this day.

Most of the buildings you manage are in Midtown or Midtown South. There’s this kind of tension between the areas where Midtown South is getting more expensive and Midtown rents are starting to either decline or not grow at the same rate. What do you think the future holds for Midtown as a market?

If you were looking at a chart of Midtown, Midtown South and Downtown over the past 10 years, what you’d see is they all three peaked in ‘07 and took a nosedive in ‘08, ‘09. Midtown hasn’t yet retained its peak, whereas Midtown South and Downtown have both recovered past their peak. And the gap between Midtown and Midtown South is shrinking. Midtown is now like $6 [less per square foot]. It’s catching up. And we will also track the migration. Whereas Downtown and Midtown South have had a net increase in tenancy since the trough, O.K., let’s say 2010 or whenever that was, Midtown has had a net decrease to the tune of about 10 million square feet of tenancy.

Why do you think that is?

Traditionally, Midtown, Sixth Avenue and Midtown East was the market with the highest demand in Manhattan, right? That’s the core. But for the most part, due to outdated and anachronistic zoning, there was no ability to renew the building stock right in that part of town. So, there were a couple of workarounds, right? [Like] 390 Madison and 425 Park. But L&L will tell you that having to retain the superstructure of the existing buildings was a huge pain in the ass. Then the city did this kind of spot zoning with SL Green [in the area around One Vanderbilt], which led to the Midtown East rezoning.

But along the way [that led] to a battle [with developer] Andrew Penson and Argent over the disposition of the air rights over Grand Central [which Penson’s Argent owned]. He made an investment in that, and he had a monopoly on air right sales. And then along came the city, which said, “Give me a subway; give me this; give me that.” So, while this is all being sorted out, the demand grew from the traditional Midtown core tenants, the FIRE sector, for new product. Well, I mean, that’s just natural; not every business wants to be in a building that was built 35 years ago, right?

We lived in a town where, by 2005, a new building was one that was built in 1987. That was almost 30 years old, and that was new, right? The development industry, hamstrung over here in the Midtown core, pioneered Hudson Yards. And it ate Midtown’s lunch.

And now, once the damage was done, the city fathers got their act together and said, “Well, maybe we should, you know, rezone this thing here called Midtown.” And let people tear down buildings. I mean, how stupid—you tear down for 425 Park, and you have to build a smaller building? On what planet does that make sense?

I personally believe that when you live or work in Midtown Manhattan, you have given up your right to sunsets and vistas. You have bought into this alternative reality that looks more like Shanghai and Hong Kong; you’re going to be living in it and working in a canyon of towers. So, for me, for the city to be in the business of trading infrastructure for bulk is a perfect business. It’s the perfect way to help the infrastructure, keep up with the private industries’ redevelopment. Seems like it took forever for them to figure that all out.

My prediction is, well, the cow has left the barn, right? Hudson Yards is up and running. And there’ll be a lot more development over there. But at long last, Midtown will develop new buildings that can compete with Hudson Yards. And I think the balance will eventually shift back. It’s going to take some time.

Hudson Yards had first mover advantage in the 21st century. And Midtown paid a heavy price for, I think, some very poor decision-making.

How do you think the Midtown market will weather an economic downturn, which many people are forecasting in the next few years?

I think the answer is that Midtown South and Downtown will kind of brush it off because they’re playing with the house money at this point there. They’ve already exceeded the last peak: Most of those investors are well ahead of where their pro formas were, and they’ll be able to absorb some of this. I think Midtown will struggle.

What’s the last two years been like sharing a name with the other Michael Cohen?

Amusing. People remember my name more easily. I have a built in opening joke for any speaking engagement.

It varies, but usually something along the lines of “I’m the other Michael Cohen, not the guy going to jail. I’m one of many, and we’re going to unionize to rehabilitate our brand.”