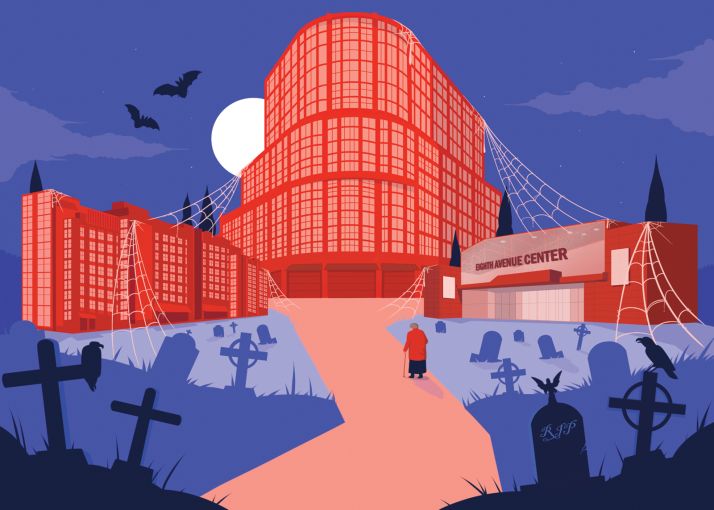 Updates to the city charter could mean more developments fail to make it through the city rezoning process. Here are three projects that died in ULURP (left to right): 50-25 Barnett Avenue in Sunnyside, Queens, 4650 Broadway in the Upper Manhattan neighborhood of Inwood and 6208 Eighth Avenue in Sunset Park, Brooklyn. Illustration: Napal/For Commercial Observer

The city might rewrite the rules of development. Well, at least development that requires a zoning change.

A commission convened last year to update the city’s charter, or governing document, is considering a slew of potential reforms to the city’s land use and planning process, which determines nearly everything about the New York City real estate market.

Trying to reform the city charter is a bit like throwing everything against the wall to see what sticks. Anyone, from politicians to regular New Yorkers, can submit suggestions to change how the city government operates, whether it’s about how budget decisions are made or who holds corrupt politicians accountable.

The city’s 15-person charter revision commission, which was appointed by the mayor and other city officials last year, collected most of the recommendations and released them in a 16-page document earlier this year. Five pages are devoted to revamping the city’s complex zoning and planning rules. Many of the proposals aim to make it tougher for developers and planners to rezone neighborhoods for new construction. Others involve creating comprehensive plans for how development should occur in each neighborhood. After months of meetings, the commission will narrow down its proposals to a handful of ballot questions to be decided by city voters in November.

City councilmembers, borough presidents, lawyers, the real estate lobby and activist groups are all caught in a tug-of-war over which policies should make it to the ballot later this year. The Real Estate Board of New York, which represents the city’s largest developers and landlords, would prefer to keep the byzantine rezoning process largely the same as it is now. The handful of changes the lobbying organization did recommend are aimed at giving the City Planning Commission and the mayor even more power, like allowing the commission to have the final say over special land use permits, instead of the City Council. On the other side of the spectrum, many councilmembers and other local politicians are demanding that the Department of City Planning allow more transparency into the rezoning process. The council also wants more power to decide land use matters, even though it already has the final say over whether rezonings get approved. The City Council has defeated a handful of developments that required rezonings in recent years, including a proposed 15-story residential tower in Inwood and a seven-story, 209-unit affordable housing project in Sunnyside, Queens.

In a report released last month, the Council made a slew of recommendations, including requirements that DCP post rezoning applications online as soon as it receives them, that the City Planning Commission certify complete applications within six months, and that developers must meet with local community board members and council members before submitting their rezoning plans to DCP. The 51-person body also hopes to amend and strengthen the rules that govern how city agencies site homeless shelters and waste transfer stations. Some members, like Bushwick Councilman Antonio Reynoso, believe that their districts are unfairly burdened with unpopular facilities that should be spread more evenly across the five boroughs.

“Low-income communities should not be responsible for bearing the brunt of new density of infrastructure for a growing city,” Reynoso testified at a meeting of the charter revision commission at Medgar Evers College in Crown Heights last September. “With this commission we have an obligation to shift our planning processes away from short-term political goals and towards long-term planning that accounts for realities of climate change and needs of a growing coastal city.”

However, perhaps the biggest goal of progressive politicians and activists is the creation of a single, citywide planning framework that takes into account housing, parks, transportation, climate change, economic development and demographics.

“The lack of a citywide plan contributes to the overall housing shortage and exacerbates conflicts for space between different uses,” the Council’s report notes. “The ad hoc selection of particular neighborhoods for growth-oriented rezoning plans has proved to be an inefficient and acrimonious process and is not delivering enough opportunities for development as the city needs. Making matters worse, unlike other cities, New York does not iteratively update zoning and other development regulations, leaving many parts of the city hamstrung by decades-old regulations.”

The city last attempted to create a sprawling, five-borough planning document in 1969, but it was so overly broad that it was never adopted, said Frank Chaney, a real estate lawyer at Rosenberg & Estis and member of the New York City Bar Association’s zoning and land use committee. He also noted that public opinion soured on the concept of master planning, as communities began to struggle with the effects of huge highway projects, slum clearance and large-scale developments engineered by Robert Moses and his political peers.

“While creation of a plan like this sounds like a good thing, the issue for most communities is that [a master plan] is of less interest than a more granular approach dealing with the specific issues in their communities,” Chaney argued.

The Council doesn’t specify which agency or office would be responsible for producing such a labor-intensive report, but it does require the collection of 20 previous years of data on issues like land use, resilience, infrastructure, development and population change. It also demands that the framework include projections for the city’s needs for the next two decades and “at minimum, multiple possible scenarios for growth.”

Some groups, like the Regional Plan Association, are advocating for the creation of a new Office of Community Planning, which would oversee the creation of a citywide planning scheme. In keeping with that goal, many progressive activists are pushing for more resources and staff for community boards so that they can do a better job of engaging with the neighborhoods they are supposed to represent.

Chris Walters, who oversees zoning policy for the Association for Neighborhood Housing and Development, a nonprofit developer group, said his organization wants community boards to have “increased funding for things like publicizing meetings, providing refreshments, daycare, posting minutes of meetings, and having each community board have a full-time planner.” The planners would help develop neighborhood-specific plans with targets for housing and investment for schools, parks and transit. Proactive planning will help lower income neighborhoods like East New York in Brooklyn and Jerome Avenue in the Bronx get city investment without having to go through rezonings, which inevitably raise the specter of displacing struggling tenants, Walters explained. Meanwhile, wealthier areas get the benefits of lower density zoning and less development.

“More exclusive communities, right now, are not opening themselves to New Yorkers [becuase they] are not taking on new density through mandatory inclusionary housing,” he said.

Progressive housing groups also want community boards to reflect the racial makeup of their communities; in neighborhoods that have experienced large influxes of immigrants or gentrifiers, community boards are sometimes populated by an older generation of residents who don’t share the priorities of the new residents.

In addition, there are a number of charter revision proposals that will spark alarm among real estate developers. Some politicians and anti-development groups have trained their aim on the Board of Standards and Appeals, a quasi-judicial body that grants minor zoning changes to landlords who argue the city land use rules make development or renovations financially difficult. Councilman Ben Kallos, for example, wants to give the City Council and borough presidents the power to appoint members to the board, which is currently chosen by the mayor. He posits that the mayor has too much power over the land use process, because he appoints the BSA and the majority of the City Planning Commission.

“No single indivdual who is seeking money to run for higher office should be able to control the land use process from beginning to end,” Kallos explained.

Another recommendation on the charter commission’s list calls for allowing the council to veto BSA decisions. But even Kallos acknowledges that could raise legal issues, since the council also signs off on major zoning changes.

Real estate lawyers argue that these two changes could create serious legal issues for the city, because they would politicize a board that’s supposed to be independent of city politics. The BSA exists to offer relief from the city’s zoning code. Without the BSA, developers can argue that zoning qualifies as a constitutional “taking” of property.

Letting the council call the shots on BSA members and decisions would “remove the BSA from its quasi-judicial status,” said Mitch Korbey, an attorney who chairs the land use group at Herrick Feinstein. “It would be a fundamental misunderstanding of what the BSA does.”

In response, Kallos argued that “any appearance of independence is gone once you learn that every single member is appointed by the mayor. And most independent bodies in the city, like the Campaign Financne Board, have appointments that reflect checks nad balances between the branches.”

An even more radical proposal would let community boards and borough presidents have binding votes in the city’s rezoning process, otherwise known as the uniform land use review procedure (ULURP). The problem, critics say, is that not all community boards are created equal. Some have experience managing complex zoning applications, and others don’t.

“Community boards run the gamut in terms of their sophistication, talent and experience,” Korbey explained. “I don’t think they should get binding power in ULURP and ultimately localize decisions.”

Community boards tend to vote down controversial projects during the land use process. If community board votes carried legal force in city land use decisions, many large developments would never make it to the finish line. There are also legal implications to granting neighborhood political organizations significant control over zoning.

“In general, the courts have been leery of granting land use power to non-property-owning residents, and I think that’s one reason why community boards don’t have a binding power in the land use process,” said Chaney, the lawyer at Rosenberg & Estis.

The charter commission list also offers plenty of other propositions that would disrupt the city’s real estate world, like forcing large as-of-right projects to go through ULURP and imposing the city environmental review process on every new development.

Unsurprisingly, many folks on the real estate side of the business have an “if it ain’t broke, don’t fix it” mentality about the ULURP process, which is already lengthy and requires the creation of extensive planning and environmental documents.

“I know there’s a lot of concern in communities, but we have a robust city legislature that has repeatedly inserted itself into projects and has the right and ability to vote against something,” Korbey explained. “Not only does the process allow for local input and local veto, it’s very transparent. It’s very remarkable what we manage to do here and how well it works. Are there things we can do to make it work even better? Sure. Do we need to upend the city charter to do that? I’m not sure.”