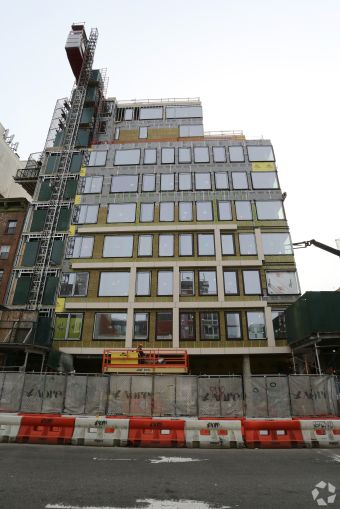 Aore Holdings has landed a $48 million refinancing from Ladder Capital on a condominium building it recently finished constructing in the Bowery, according to documents filed today in city property records.

The transaction, which closed in mid-February, refinances $34.2 million that Bank OZK—at the time known as Bank of the Ozarks—lent to kickstart development on the condo tower in 2015. It also adds an additional $13.8 million senior mortgage to the capital stack.

Aore topped out the 10-story, 31-unit building at 32 East First Street, between First and Second Avenues, early last year. The 70,000-square-foot building, which includes a 6,000-square-foot retail suite on the ground floor, went up on the site of demolished gas station, which was the last such business to serve the East Village when it was bulldozed in 2015.

Prices for condo units for sale on the building’s website range from $1.2 million for a 484-square-foot studio on the fourth floor, to $8.7 million for the 2,766-square-foot penthouse. The building, which has an alternative address of 24 Second Avenue, includes a gym, a spa, a lounge with an outdoor public space for residents and a built-in filtration system for tap water.

Although Seinfeld’s Cosmo Kramer may have been exaggerating when he declared that the building’s block—which abuts the intersection of First Avenue and East First Street—“must be the nexus of the universe,” the neighborhood has sealed its reputation as an engine for commercial development. A surfeit of trendy hotels, including The Standard–East Village, The Ludlow and The Bowery Hotel, has sprung up on the surrounding streets, and condo prices have soared despite growing supply.

According to research by CityRealty, East Village condos sold, on average, for $1,836 per square foot in 2018, a 9 percent increase above the previous year. And the neighboring Nolita area saw the biggest year over year increase in Manhattan, with sales prices rallying 20 percent.

Representatives for Ladder Capital and Aore Holdings did not immediately respond to inquiries.