Avison Young’s recent acquisition of GVA, one of the United Kingdom’s leading and most diverse real estate advisory businesses, will add offices in countries throughout Europe and expand the New York office’s reach to international investors, according to James Nelson, Principal and Head of Avison Young’s Tri-State Investment Sales group.

“The center of foreign investment in New York City has shifted from China to Canada and Europe,” Nelson said. “In light of this, Avison Young is well-positioned to serve as an advisor to international investors. Our headquarters is located in Canada and the GVA acquisition brings with it additional offices in over 30 European cities and a broad portfolio of international clients.” 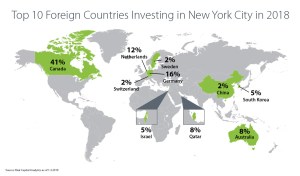 China was noticeably absent in New York City in 2018, accounting for only $160 million of the acquisitions or only 2 percent of the foreign dollar volume, a drop from its peak of $6.2 billion in 2016, the report showed.

Nelson noted, “This is likely due to stricter measures imposed in China in 2017 on overseas investments in property, with Chinese investors expected to continue to sell more foreign real estate than they buy in 2019.”

Of the foreign investment, office transactions accounted for 59 percent of the dollar volume, with multifamily at 31 percent and retail at 23 percent.

“We expect to see more interest in office properties for 2019 as proposed regulations for multifamily will deter foreign investment, even if they have a strong local partner,” Nelson noted. “With Amazon bringing 25,000 to 40,000 jobs to Long Island City over the next few years, we should also see increased interest in commercial development in the boroughs.”

Some of the most active foreign buyers in 2018 included Brookfield, GIC, OMERS and Allianz. Brookfield, a Canadian-owned company, purchased an option for a 99-year ground lease for $1.2 billion on Kushner Cos.’ office tower at 666 Fifth Avenue. The company also spent $165 million on four acres in the South Bronx, where it plans to build 1,300 housing units, and bought seven storefronts on Bleecker Street to test out new retail concepts. With its December 2018 acquisition of Forest City Realty Trust for $11.4 billion, Brookfield became New York City’s biggest commercial landlord.

“The key to our success is that we have one unified, sales team that shares in all commissions,” said Jim Kinsey, Principal and Senior Director of the group. “As a result, investors can speak to any member of our team to navigate our listings and be introduced to one of our asset specialists.”

The Tri-State Investment Sales group finds that investors tend to focus on one particular asset class and will oftentimes consider locations throughout the city, which makes searching for opportunities much easier as opposed to having to jump from one agent and neighborhood to the next.

“In today’s market, it is essential to price listings properly and work with clients who understand the dynamics of the marketplace,” Nelson said. “When a client lists with us, we provide confidence that they can transact. As a result, buyers take our listings seriously and are more likely to purchase.”