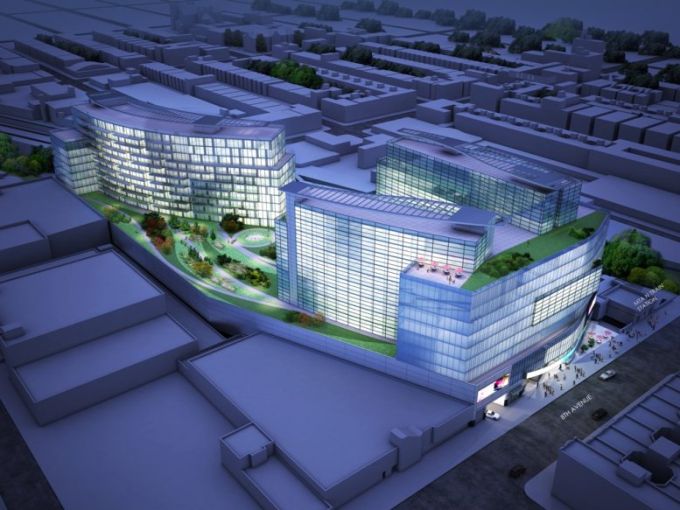 A rendering of the current development proposal for 6208 Eighth Avenue, which is now on the market. Rendering: Raymond Chan Architects

A group of Flushing-based builders who planned to develop a 1.3-million-square-foot mixed-use project in Sunset Park, Brooklyn have put their development site on the market for $150 million, Commercial Observer has learned.

After getting years of pushback from the local community board and struggling to get through the city’s lengthy rezoning process, the owners of 6208 Eighth Avenue have hired a Cushman & Wakefield team led by Stephen Preuss to find a buyer for the property, a massive parking lot on the border between Sunset Park and Dyker Heights. The block-through site between 61st and 64th Streets entered the uniform land use review process (ULURP) for the second time last summer. The consortium of developers hoped to build three towers—a 12-story, 250-unit residential building with 50 affordable apartments, a 12-story office building, an 11-story, 250-room hotel on top of a two-story retail podium.

The developers are seeking a rezoning in order to build slightly more parking spaces than would normally be allowed—1,883 spots instead of the required 1,582. They also want a variance that will allow them to deck over the adjacent Long Island Railroad and N train tracks. The property happens to be right next to the Eighth Avenue stop on the N train.

Although the ownership group, 8208 Realty LLC, has faced objections from Brooklyn Community Board 10, Preuss told CO that they expect to get their special permit from the Department of City Planning by the end of the year. The Brooklyn Borough President’s office is currently considering the application, he said. However, a future owner could still choose to develop the site without special city approvals.

The 158,000-square-foot lot was originally rezoned in 2007 to allow a dense mixed-use residential and commercial development with a Home Depot. But the developer, Andrew Kohen, abandoned his plans in 2008 because of the recession, according to the Brooklyn Paper. Then he unloaded his site to the current owners for $51.5 million in 2014, according to public records. The community board shot down an earlier version of the plans later that year, as New York YIMBY and other outlets reported at the time.

Preuss said they intend to market the site, which sits inside an opportunity zone tract, to opportunity zone funds and major developers in the tri-state area. The asking price of $150 million works out to roughly $120 a buildable square foot, assuming a 1.3-million-square-foot development.

Many brokers and owners are preparing for a slowdown in the investment sales market, but the C&W broker remains optimistic.

“For larger real estate funds and larger owners, it’s much harder to find development sites of size than to find 10,000- or 20,000-square-foot sites,” he said. “There’s an appetite for larger-scale development sites in the boroughs.”