M&T’s Matt Petrula on His Appetite for Construction 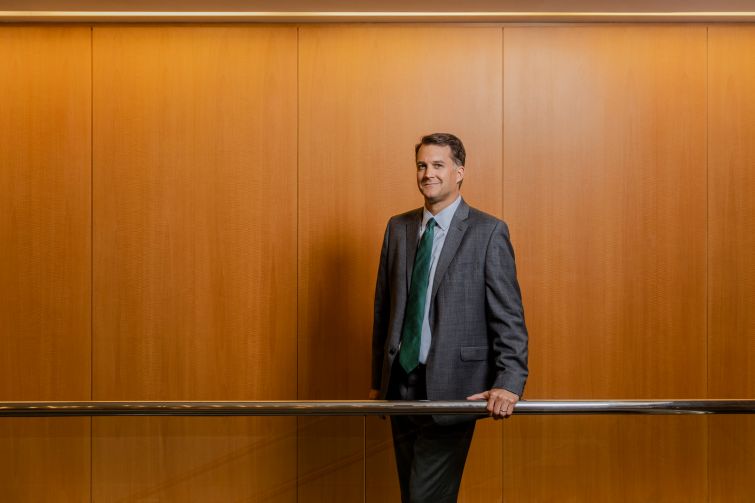 It’s hard to talk about construction without discussing one of New York’s most active lenders: M&T Bank. Matthew Petrula, M&T’s senior group manager for commercial real estate, joined its lending team 18 years ago and has been originating loans ever since. The bank was one of the few traditional lenders who continued to loan money through the downturn, allowing it to gain market share and cement its reputation as a steady counterparty. Today, M&T doesn’t shy away from sizable construction loans on some of the Big Apple’s most interesting developments.

Some of those noteworthy debt deals include a $360 million loan to finance the development of The Durst Organization’s Queens Plaza Park project in Long Island City, Queens; $228 million in construction financing with BNY Mellon as co-lender for Admiral’s Row—Steiner NYC’s mixed-use project underway at the southwest corner of the Brooklyn Navy Yard; a $425 million senior construction loan for Extell Development Company’s Brooklyn Point—Extell’s first Brooklyn development and the tallest residential building in the borough (with Capital One and Intesa SanPaolo Bank as joint lead arrangers); and a $173 million refinance for 15 Queens apartment buildings  owned by Zara Realty Holdings.

Petrula, 42, a Long Island, N.Y, native, resides in Massapequa today with his wife Jennifer and two children. His father once gave him some good advice he still follows today: “Not every risk can be mitigated. Surround yourself with smart people and trust the team’s instincts.”

Commercial Observer: How did you first get interested in real estate?

Matthew Petrula: My dad [Steve Petrula] was actually in real estate. He’s been retired for around 10 years now, but he headed the real estate lending group at Bank of New York. So, it was sort of in my blood and I was interested in what he was doing. I was a finance major at Hofstra University and had taken a real estate course there. I knew I’d be in finance and real estate really piqued my interest. After graduation I went to work for a small savings bank, CFS Bank out on Long Island, which is a predecessor bank to New York Community Bank. I worked for Jim Carpenter [now the chief lending officer at NYCB]. I had worked there for a year or so before CFS merged with NYCB, then moved to M&T to work as a credit analyst in its credit group.

You were focused on commercial mortgages specifically?

I was. We did a little bit of construction lending but for the most part it was permanent mortgages. I came to M&T in 2000 to learn credit more broadly and commercial lending outside of real estate as well as real estate. But real estate was always my first love, and so when the opportunity arose to join the real estate group two years into my tenor I transferred from credit to a commercial real estate analyst position.

Was your dad happy about that transition?

He was [laughs]. You know, whatever I am fulfilled by he’s also happy with, but it was neat to be on the same path as him.

You’ve been at M&T for 18 years and currently head up its real estate group. From your perspective, what’s been the biggest change in lending during that time?

The amount of first mortgage leverage on a transaction has certainly come down. There was a time right up until the downturn where it would be typical to get 75 or 80 percent financing on a first mortgage. There would typically be a mezzanine tranche behind you, sometimes bringing it up to upwards of 90 percent financing—which is pretty incredible. That’s unheard of today and a fundamental shift in the market. A big part of that shift came from increased discipline on the lending side—partly through the regulatory environment, and also as a function of where interest rates are. When interest rates are low and cap rates are low, you’re always underwriting to a sensitized interest rate environment.

Lots of lenders’ fingers were burned back then. Is that adding to the discipline?

Agreed. I think there’s a lot more discipline, from a regulatory standpoint but also from banks having been through some hard times and taking some losses.

How did M&T’s commercial real estate portfolio fare through the downturn?

Remarkably steady. In New York we really had no losses. We had a few loans that we watched closely, but we were very fortunate.

What’s the secret to your success?

Sponsorship. Choosing our sponsors very carefully and serving our customers has really been our [trademark]. We’ve made sure that we’ve maintained capital to serve our long-standing relationships and we focus on choosing the projects that we finance very carefully.

How has your appetite for construction lending evolved?

I don’t think it has changed too much over the years, it’s pretty consistent to where it’s always been, and I think our customers would tell you the same. What’s changed is what our customers are looking to build to some extent, based on supply and demand concerns. For example, we’ve been extremely active in Brooklyn over the past few years, more so than Manhattan. You had the 421-a program expire and then come back as Affordable New York and that created a lull in the development loans that we were seeing and that our customers were pursuing. But I’d say we’ve been pretty consistent in our construction lending.

What are your customers building today?

Today, quite a few multifamily rental properties under the Affordable New York program, so 70/30 rentals, we’ve seen a lot of volume there. A few years ago we saw many more requests for luxury condominiums and did quite a few condo loans, but more recently, given the increased supply of very high-end condos in the market, the $5 million or over units, we’ve seen far fewer requests at those levels. The loans we’re pursuing in the condo space are primarily in the more affordable, accessible end of the luxury spectrum.

Gary Barnett’s Brooklyn Point is a good example of that, I imagine.

Yes, we’re extremely excited about that project, and it’s Extell Development’s first Brooklyn project, which is pretty exciting. Extell is a long-standing customer of ours. They’re terrific. We led the construction financing for Brooklyn Point, which was a $425 million first mortgage, and Capital One and Intesa SanPaolo Bank were also in the transaction. It’s a 440-unit, 68-story luxury tower.

What appealed about the project from a construction lending standpoint?

What we liked about the product was a few things: The average price point of the units is around $2 million, which for a luxury building is on the more accessible end of luxury for New York City. The location is terrific and Extell builds a great product in general. It also offers a 25-year tax abatement, which is tremendous for a buyer. It will be the tallest building in Brooklyn when completed and really ticked all the boxes for us; terrific sponsorship, great location and the transportation connectivity there is excellent.

That’s a multi-phased development, and we are the lender on the land there. We financed the land in 2012 and it goes to show the consistency that we show the market. There was a time when there was not a lot of land lending going on, so it was a good opportunity for us to serve a good customer. We made the first loan for 325 Kent Avenue—the first project they completed at the site and leased very successfully. The second building is 260 Kent.

Are land loans a big part of your portfolio?

No, I wouldn’t say so. But for a good customer such as Extell or Two Trees we’ll certainly consider it. Location and sponsorship are always the draw for us. They took their time to design a really incredible product and we’re very excited about it. It will be completed sometime in the late 2020s. Another site on the waterfront that we financed was Empire Stores; we were the lead construction lender there [providing a $217 million loan. The deal was recently recapitalized with a $280 million AIG loan]. The tenancy is top notch across different sectors and the retail and restaurants are out of this world; it’s such a neat place. Midtown Equities is the developer  and, again, a great relationship of ours.

You’re doing some substantially sized  loans throughout New York City and beyond.

We’ve definitely moved up market a bit in the size of loans that we’re willing to pursue. We have a very active syndications desk, which has been a tremendous complement to our lending business in New York. The recession was a time where—because we were fortunate enough to have such a clean book—we gained market share in New York. Some of our best relationships came out of that period as some sponsors’ relationship banks were not actively lending.

I do. There’s a lot of building going on, for sure. I think a couple of factors continue to make me bullish on the market, although we’re slightly cautious in some sectors. New York City is a city of eight and a half million people, and it’s a place that people really want to be. It’s a top choice for many young people and that has been very good for the market in general. We’ve seen a good amount of new office supply but we’re in a city where the average age of a building is 70 or 80 years old. So new supply of 20 million square feet coming online doesn’t move the needle all that much. There has been a de-emphasis away from the financial sectors into the TAMI sectors, which has been great for New York in attracting a more creative work force. There’s a lot of multifamily supply coming online and more in the way of rent concessions, but overall we’re very bullish long term on New York.

Are you seeing any signs of lender discipline sliding at this point in the cycle?

Not really. There are more non-bank lenders in the market and have the ability to offer more aggressive terms than banks do. But by and large the market is pretty disciplined. There are also a lot of family offices who maybe were the runner up bidder on a few acquisitions in a row and with a lot of capital to invest have taken to lending instead, and they’re often doing very well.

It’s an extremely competitive market; is there room for everyone to be lending?

I think that we’ve certainly seen more competition for deals we’ve pursued. Ultimately, what wins the day for us—and relationship banks in general—is that ability to be there in good times and bad. If there’s a correction or some kind of shock to the capital markets, that will have a huge impact on debt funds’ ability to serve their customers. I do think there is space for everyone—we see debt funds competing with banks on certain projects—but our long-standing relationships really understand the value of having that relationship with a bank.

Are you seeing more foreign banks in syndicated deals?

I’d say so, Intesa SanPaolo being a great example of that. Banks are well-capitalized today and healthy. There’s no shortage of banks willing to lend.