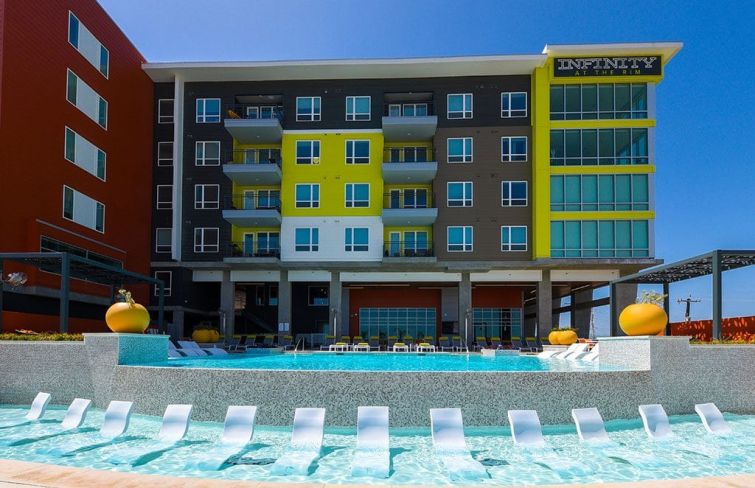 Infinity at the Ridge in San Antonio. Photo: Greystone

Greystone has originated a $58.4 million bridge loan against a residential property in San Antonio, Commercial Observer can exclusively report.

The debt, lent to Tampa, Fla.-based DeBartolo Development, refinances construction debt and knocks out preferred-equity investments on Infinity at the Rim, a 310-unit apartment complex at 18130 Talavera Ridge in the South Central Texas city, the state’s second largest metropolis. (Though it’s about 15 miles north of the city center up Interstate 10, Infinity does stand within San Antonio’s city limits.)

“The Rim provides a unique opportunity…with its location just outside of San Antonio and a range of community offerings multiplying by the day,” Jeff Englund, the Atlanta-based executive who led Greystone’s work on the deal, said in an email. “To say the growth has been explosive would be an understatement, and we’re seeing very strong demand for the rental product in this oasis for a live-work-play lifestyle.”

The building stands on a hill at the north extremity of The Rim, an 800-acre shopping center whose tenant roster boasts more than 100 stores. The Rim also hosts five other residential projects, a mix of rental buildings and condominiums. The Infinity building itself has parking for residents, a swimming pool, recreation rooms and an onsite car wash. But its most intriguing amenity is a a deal that Greystone calls a “co-branding agreement” between DeBartolo and Amazon.

Amazon’s logo is featured prominently on the building’s website, and each of Infinity’s apartments comes preloaded with Amazon technology. The units all have access to Alexa, Amazon’s personal-assistant service, as well as Nest-brand thermostats and smart outlets. Renters also get a year’s subscription to Amazon Prime when they sign a lease, and the property has Amazon lockers for package retrieval.

According to an Amazon spokesperson, the arrangement is part of a program called “Easier With Amazon” that the Seattle-based tech giant has also brought to residential developments in Portland, Ore., Fort Worth, Texas and Dallas.

A DeBartolo executive who worked on the deal did not immediately respond to an inquiry about the Amazon deal.

As of 2017—the year of the most recent American Community Survey estimate—San Antonio’s population has grown more than 10 percent since the 2010 census. But over that period, the size of its economy has ballooned out of all proportion, expanding by 56 percent.

Rent growth hasn’t been quite as sharp, as builders like DeBartolo have worked aggressive to expand the city’s multifamily housing supply, according to research by Marcus & Millichap. But typical leases have become about 3 percent to 4 percent more expensive every year since 2014.

At Infinity at the Rim, 582-square-foot studios rent for $1,205 per month, according to the building’s website. Townhouses with three bedrooms and three bathrooms, as big as 1,809 square feet, rent for $3,295.