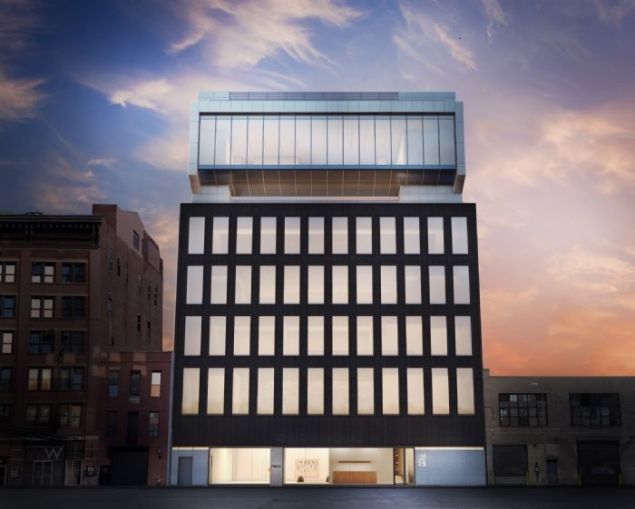 A rendering of the front of 540 Wet 25th Street, the new home of a Pace Gallery. Photo: CoStar Group

The 10-year, interest-only loan—$50 million of which was securitized in the $756.4 million GSMS 2019-GC38 CMBS transaction—carries a rate of 5.15 percent. The deal closed on Jan. 29, according to property records, and the remaining $40 million parri passu debt not included in this CMBS deal is expected to contribute to one or more future securitizations, according to KBRA’s report.

This deal replaces $58.3 million of existing debt provided by Shanghai Commercial Bank in October 2016 for Weinberg’s fee simple interest in the asset, as per KBRA’s report. The new debt includes a $6.8 million reserve for the build out of the project’s shell; closing costs; and returned approximately $23.9 million of equity to Weinberg.

The 74,500-square-foot redevelopment of 540 West 25th Street between 10th and 11th Avenues was completed in December 2018, built-to-suit for Pace Gallery. Weinberg demolished the existing property and completed a $79.8 million, or $1,070 per square foot, warm shell that month, establishing a ready-to-use building, according to KBRA.

Pace Gallery, a private contemporary art dealer, has leased the property under a triple-net lease through December 2038—10 years after the new loan’s maturation date. Pace currently pays a rent of $112.66 per square foot, which will increase by 3 percent each year through 2028, according to KBRA.

As part of Pace Gallery’s lease agreement, Weinberg needed to deliver the warm shell to Pace, which has invested $18.2 million, or $243 per square foot, to complete its own interior build out and obtain a temporary certificate of occupancy (TCO), which is expected to be approved in May 2019, according to KBRA. The loan was structured with a $19 million letter of credit from Pace, which will be released once the interior build out is complete and the TCO has been issued.

The eight-story building spans roughly 60,000 square feet. There will be a library and a gallery with 18-foot-high ceilings for rotating exhibitions featured on the first floor, and the second story will be exhibition space, complete with an adjacent terrace and an open storage system for artworks that were typically accessible only through private viewing, according to information from Costar Group. The third floor will be fitted for galleries and will include office and archival space, while the fourth and fifth floors will comprise most of the building’s office space, including for Pace’s executive team. The top two floors round out the remaining gallery and exhibition space and will feature 19-foot-high ceilings.