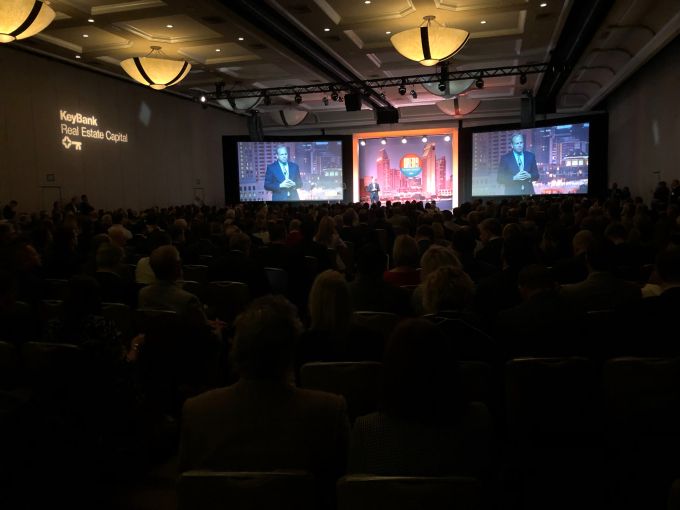 A strong economy and demographic tailwinds have made it easy to feast as a multifamily lender or developer lately. But cracking the nut of affordable housing? That’s another story.

A panel at the Mortgage Bankers Association conference in San Diego on Tuesday was chock full of residential finance experts—including a pair of executives from Fannie Mae and Freddie Mac, organizations that are mandated to support reliable blue-collar residential options. But the speakers had few good answers for how to dent the issue of sky-high prices in America’s biggest cities.

“There are government programs for affordable housing. But at the same time, it seems like some of the stock for workforce housing has been taken out of play,” noted Scott Bassin, a multifamily originator at PNC Bank who served as the discussion moderator. Owners, he griped, have been buying up older properties and converting them into high-end digs, culling the housing stock of good options for renters on a budget.

The agencies are doing all they can to improve the picture for renters, Jenkins said. A major effort to boost “green” lending that supports ecologically minded renovations at apartment complexes, for instance, is partially aimed at reducing middle- and working-class workers’ utility bills. But the agencies can only do so much, she opined.

“The real answer is more units,” Jenkins said. “Neither [Fannie nor Freddie] plays in the construction space, but if you really want to know the answer, it’s, create more supply.”

Robert Levin, a senior vice president who represented Fannie Mae on the dais, agreed. Fannie’s eager to move the needle on creating more supply, but determining the most effective approach isn’t straightforward, he explained, implying that the agency might have to settle for incremental improvements.

“Debby’s right: You need ways to increase supply,” Levin said. “We’re kicking off a deep dive into how we can play in that space. Can we lan the marketplace towards something that can be done?”

Showing a dose of political savvy, Jenkins and Levin were scrupulous to avoid weighing in on the charged issue of reform. The two quasi-public entities have been in federal conservatorship since the financial crisis, and though legislators in both parties have talked a big game about permanent reform in many guises, political gridlock has stymied any progress. But some GSE-watchers sense the potential for movement. The term of Mel Watt, the previous director of the Federal Housing Finance Agency, expired in early January, and Donald Trump nominated an experienced federal housing staffer, Mark Calabria, to replace him. Meanwhile, Joseph Otting, the comptroller of the currency, has taken the job on an interim basis.

Berkadia CEO Justin Wheeler—who joined Bassin as a fellow private lender on the panel—said the question of reform would be one to watch this year.

“Legislatively, we’re paralyzed. But there is a lot of power in the FHFA,” Wheeler remarked. “Someone is coming in who is different, and with a stroke of the pen, he could put in different capital rules.”

Bassin agreed that the issue could make or break the multifamily markets in 2019.

“I personally think that even if there’s radical reform—as long as it’s done in a methodical way—the market will adjust,” Bassin said. “But if there’s precipitous change that no one saw coming, I think that could screw things up.”