Is Willets Point in Queens Getting a Soccer Stadium? 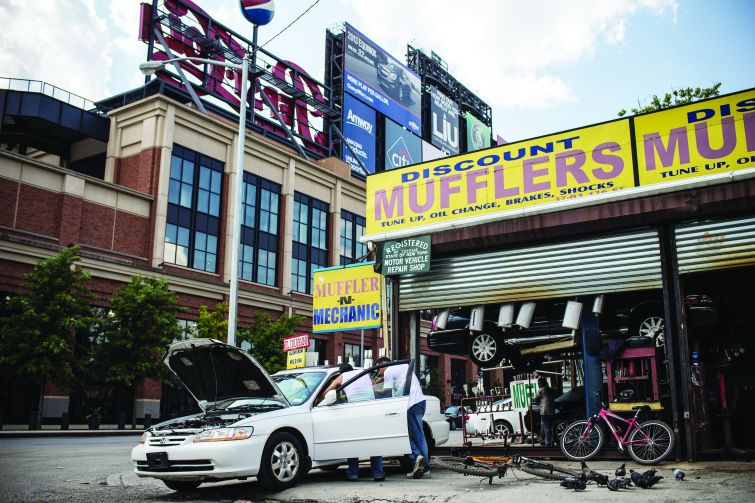 Several acres of auto shops were demolished to make way for new development in Willets Point. But what exactly that will look like is unclear. Photo: Andrew Burton/Getty Images

For more than a decade, the Willets Point section of Corona, Queens, has lain idle, while two mayors, various developers, a baseball team and possibly an airline have fought over what it should become.

Earlier this month, the city’s Economic Development Corporation released two new scenarios for the future of the blighted site, recommended by a task force assembled by the de Blasio administration last year.

One of the scenarios includes a soccer stadium for a team that doesn’t yet exist, a proposition that Queens Borough President Melinda Katz and Councilman Francisco Moya, who co-chair the task force, have both endorsed. The other would be a more standard mixed-use neighborhood with a mix of residential, retail and community spaces.

“I think the stadium that would come in here is going to be something positive for the community,” Moya, whose district encompasses the Willets Point development site, told Commercial Observer. “Queens lives and breathes soccer. There’s not one stretch of grass in Flushing Meadows Corona Park where you don’t see people playing soccer.”

Back in 2007, during Mayor Michael Bloomberg’s reign, the large triangular site between Citi Field and Downtown Flushing was cleared of acres of auto-mechanic shops, ostensibly in order to clean the area of toxic soil and redevelop it into a mixed-use neighborhood. But in June 2017, a judge vetoed the original, decade-old development plan for the site. That came as a blow to both the city and project’s contractor—a joint venture between Related Companies and the Mets-owning Sterling Equities.

In February 2018, the city announced that it was going back to the drawing board on Willets Point. The first phase of the project, which encompasses 23 acres of the site, would consist of 1,100 units of affordable housing, including 200 units for senior housing, and a 450-seat school across six acres.

As to the remaining 17 acres, a task force was assembled to make recommendations for the site.

At the task force’s final meeting in September, the group arrived at two potential scenarios for the site, which the EDC shared on its website earlier this month. The first would be primarily residential with a range of affordability, with fire and police stations, a health center, storefront retail and public spaces. The second would be centered around a 25,000-seat stadium and a large parking structure that would serve both the stadium and the nearby home of the Mets. It would also include a high school, retail and affordable housing, according to documents made public by the EDC.

These recommendations will serve as the basis for a new proposal from the developers, known as the Queens Development Group (QDG). “QDG received feedback based on the task force process from EDC. We will be using that feedback to progress conversations with EDC on the next phase of the Willets Point development,” a spokesperson for the joint venture said.

According to Moya, the tradeoff between the two scenarios is that in the former, the additional housing would be market rate.

“Without the soccer stadium, the housing that comes in is market-rate housing,” he said, because there needs to be a portion of the development that generates revenue. Part of the deliberations, he said, was, “What’s that economic engine that’s going to help develop the rest of Willets Point?”

Katz was one of the first to endorse the idea of a soccer stadium back in June 2017, just as the old development plan was scrapped for good, and then spoke of it again during the 2018 State of the Borough Address. “Just imagine if we, the world’s borough, hosted the World Cup,” she said.

Then, in October, she and Moya met with soccer player David Villa and put out a statement about the stadium. “One option that was discussed is a proposal to build a 10,000- to 25,000-seat soccer stadium in the Willets Point redevelopment area that would serve as home for the Queensboro Football Club, a proposed new team that would play in the United Soccer League, a second-division professional league,” the statement said.

For some members of the community, this is just one more harebrained scheme that indicates that the property owners and business owners in the area are not the priority of the politicians who control the fate of Willets Point.

“What the plan is today is so far removed from what the City Council approved, it’s ridiculous,” said Irene Prestigiacomo, a commercial property owner in Willets Point, and a member of Willets Point United, a local activist group. The original promise included plans for affordable housing, retail and public spaces, she said.

The group is also attempting to find out who is on the task force, which is supposedly made up of a group of stakeholders. However, other than the co-chairs, the names of the remaining members have not been released.

The final plan will be negotiated between the EDC and the Queens Development Group once the developers have submitted a new proposal, after which there will be a process for community input.

“We’re excited to move this long-stalled project forward and deliver an outcome that meets the needs of this community,” a spokesperson for the EDC said. At the moment, there is no timeframe for when to expect the proposal from the developers, the spokesperson said.