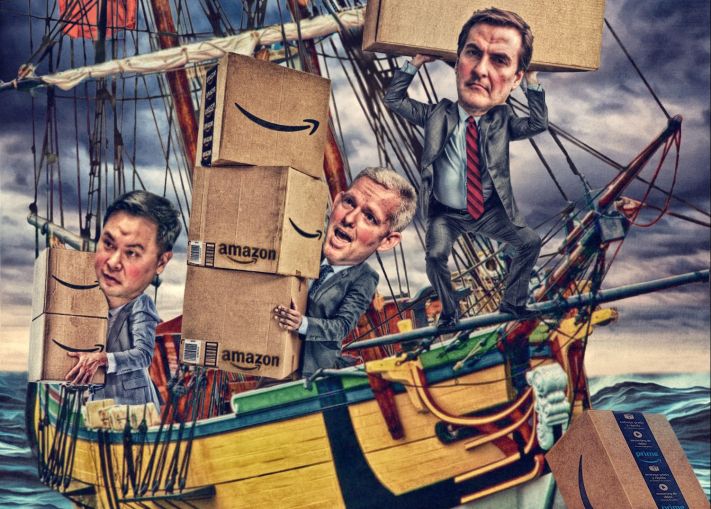 Amazon’s announcement this past November that it will bring one of its headquarters to Long Island City, Queens, had many in the real estate world jumping for joy.

The news set off a flurry of activity in the neighborhood with some retail brokers saying their phones started ringing off the hook from national brands looking for space while The Wall Street Journal reported people were buying residential condominium units sight unseen through text messages.

It also helped turn around a struggling Long Island City housing market which saw declining sales last year. A December StreetEasy report found that 18.8 percent of all available listings in the neighborhood saw a price hike immediately after the news broke.

Groups like the Real Estate Board of New York and the Long Island City Partnership heralded the deal as a win for the city, but at the same time, many expressed concern about the tax breaks given to Amazon—to the tune of nearly $2.5 billion—and the displacement of long-term residents by pricing them out of the neighborhood.

“The deal that’s before us, it’s so bad it cannot even form a framework,” State Senator Michael Gianaris, who represents Long Island City, told Commercial Observer. “We need to throw it in the garbage.”

“Long Island City is already the subject of gentrification that is driving longtime residents out,” he added. “This will accelerate that process dramatically.”

Gianaris was one of the first lawmakers to join the opposition, made up of local politicians, community groups and residents that quickly banded together to try to squash the Amazon deal by holding rallies and initiating petitions.

“I just don’t think a mega-corporation that is on the verge of becoming a super monopoly is healthy for our democracy and capitalism,” Queens Assemblyman and public advocate candidate Ron Kim said. “We need to invest more in our local neighborhoods, our communities and particularly small businesses. We haven’t got enough of that.”

“New York doesn’t need Amazon, they need us,” said Maritza Silva-Farrell, the executive director of Align. “This is a terrible deal for our city and for our state.”

Amazon ended the nearly year-long competition between cities across the U.S. for its second headquarters in November when it announced it would split HQ2 into two locations, one in Long Island City and one in an area just outside of Washington, D.C.

Van Bramer and Gianaris promptly put out a joint statement slamming the deal and held a press conference the day after with other lawmakers and Long Island City residents.

While the men have largely become the faces of the anti-Amazon brigade, they weren’t always a thorn in Amazon chief Jeff Bezos’ side, but friends. The duo joined dozens of other politicians in October 2017 by signing a letter of support for Amazon to bring HQ2 to New York City.

Gianaris said after he signed the letter, he started to learn a bit more about Amazon. That knowledge, combined with what he feels is a horrible deal for New York’s residents, caused Gianaris to revise his opinion by the time the news became official.

“Over the last year, a lot of us, as well as the public, have been educated on how bad an actor Amazon is,” Gianaris said, mentioning reports of brutal work conditions at Amazon distribution centers and delivery drivers being forced to urinate in bottles during their shifts to drop off packages on time.

The mistreatment of employees carries over to everybody in the company, from high-paying office workers to security guards, said Align’s Silva-Farrell, who met with politicians in Seattle and heard first-hand reports of Amazon’s aggressive union-busting practices.

“Why would anybody want to open the doors for a company like this?” she said. “This company really does not care for their workers.”

Aside from Amazon’s history of poor treatment of its workers, one of the biggest bones of contention opponents have with the LIC headquarters is the sheer amount of tax breaks and grants Mayor Bill de Blasio and Gov. Andrew Cuomo offered the company owned by the current richest man in the world.

Both gave Amazon a combined $2.5 billion in subsidies, with the city giving roughly $1.3 billion in tax breaks from the Relocation and Employment Assistance Program and Industrial Commercial Abatement Program, according to a memorandum of understanding (MOU) released in November.

The biggest chunk of the promised subsidies comes from the state if Amazon meets its 25,000-employee job creation target within 10 years. If so, Amazon will get $505 million in capital grants and $1.2 billion in tax exemptions through the Excelsior Jobs program, the MOU shows.

“The bigger you are, the more incentives you earn, and it should be the other way,” Kim said. “Every break should be going to the smaller, independent businesses on the ground.”

On the other hand, those welcoming Amazon think that sacrificed tax revenue is small potatoes compared to the number of high-paying jobs Amazon will bring to the city.

“We’re going to get a return on our investment at a ratio of nine to one,” claimed John Banks, the president of REBNY. “If you could invest your 401(k) in an asset that would bring a nine-to-one return you’d do it in a second. There would be no hesitation.”

Banks called the deal “the single largest economic development project in the history of the state,” which will “provide a significant shot in the arm to get development in that neighborhood going to the next level.”

“Down the road, when people do the obligatory analytical studies of what the impact was, it will show that this is probably the best deal the state and city have ever had,” he insisted.

In a letter posted on its website, Amazon wrote that it expects to generate more than $27 billion in state and local tax revenue when it moves to Long Island City and will launch career training programs for locals to get future jobs at HQ2.

But the promise of future jobs and tax revenue isn’t enough to draw everybody to Amazon’s side. Kim argued that the deal won’t benefit the local economy as much as contribute to further gentrification because Amazon refused to commit to hiring locally outside of the promised career training opportunities. He also questioned whether or not Amazon will even be in business in 10 years—with Amazon CEO Jeff Bezos himself warning employees that Amazon will likely go bankrupt one day—when the city will reap the benefits.

“It’s a good sales pitch because for decades you got away with giving away trillions by just citing jobs and growth,” Kim said. “People are too smart. People recognize it’s often a sham.”

Silva-Farrell echoed Kim’s concern about hiring locally and worries that the number of workers commuting into the neighborhood will put an added strain on Long Island City’s already overburdened subway lines.

“They are basically taking more than they are giving,” she said. “In no way are they going to benefit our state and our city at all.”

Opponents have also criticized the secrecy around how the deal was cut. Amazon required HQ2 bidders to sign non-disclosure agreements (NDAs), which prevented transparency and public input into what tax breaks cities offered. And during a City Council meeting in December, an Amazon executive testified that the company won’t go through the city’s months-long Uniform Land Use Review Procedure—which requires votes by the local community board and council member—and instead will opt for the state’s speedier and less transparent General Project Plan (GPP).

“It’s getting us ever closer to the robber baron days where these corporations are running the show instead of the public,” Gianaris said of the closed-door process. “The state and the city have both moved mountains to avoid any public discussion or approval of this thing.”

The GPP isn’t completely devoid of public input. It still requires Amazon to host public meetings with residents and politicians to hear concerns about the project and get approvals from the New York City Department of City Planning.

“I understand that some community groups feel left out or that they didn’t have a voice, but the process has set up an advisory committee to allow people to have their voice heard,” Banks said.

In addition to the meetings required by the GPP, a spokeswoman for Amazon said the company has already held some meetings with local leaders and residents to gather input about the plans and the needs of the neighborhood.

“Amazon is engaging in a long-term listening and engagement process to better understand the community’s needs,” the spokeswoman said in a statement. “We’re committed to being a great neighbor and to ensuring our new headquarters is a win for all New Yorkers. Amazon makes substantial positive contributions to the economy, the communities where we operate, and to the lives and careers of our employees.”

Many lawmakers still hope the Amazon deal gets killed outright, but it will be an uphill battle considering its strong support by Cuomo and de Blasio. As part of their fight, lawmakers have also started to craft bills that will prevent them from getting into this position again in the future.

Van Bramer, along with Councilmen Brad Lander and Jumaane Williams, introduced a bill in the City Council last month that would bar local government from entering into NDAs with companies in future economic development deals.

“Transparency is a hallmark of good governance and it should be the minimum requirement when we’re talking about shelving out billions in taxpayer dollars,” Van Bramer said in a statement to Commercial Observer. “We should all be concerned that the city and state were so eager to promise Amazon [tax breaks] that they’d bypass local land use review and agree to sign NDAs while doing so. The use of NDAs in economic development negotiations is undemocratic and wrong and should be prohibited.”

Kim plans to introduce a similar proposal in the state legislature and Gianaris is drafting a second bill that stems from reports that Amazon workers who knew about HQ2 coming to Long Island City were buying condos in the neighborhood right before the news went public.

“I think a lot of people were shocked to know that it was perfectly legal,” said Gianaris, whose proposed bill would make insider real estate trading illegal similar to the way it is in securities.

“The parallels to securities are very clear and the rationale for both are just the same,” he said. “If we value our insider trading laws, there’s no functional difference.”

Local lawmakers have also started to reach out to politicians in other major cities across the country to draft laws that will make competitions like the great Amazon HQ2 race—which some have likened to a Hunger Games-style contest—nonexistant in the future.

“Corporations have the luxury to go from state to state for these type of sweetheart deals,” Kim said. “We’re working with other states to stop competing with these races to the bottom.”