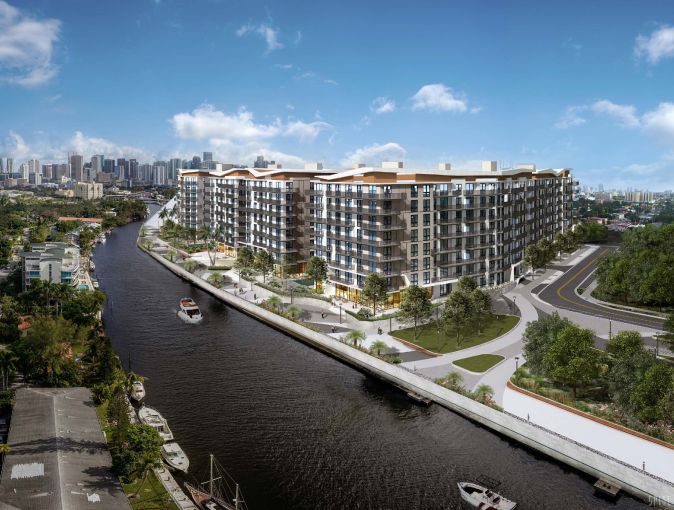 A rendering of the Waterline project in 2019. Photo: Mast Capital

The duo of developers behind a residential project in Miami has pinned down $59.7 million in debt from PNC Bank to fund the start of construction, according to Mast Capital, one of the two builders.

The Miami-based company, along with partner AEW Capital Management, envisions a two-phase project that will eventually encompass 688 rental apartments in a development it dubs Miami River Walk. Set on a 6.3-acre lot just west of Downtown, the project will abut the Miami River along a long-planned pedestrian path—known, similarly, as Miami Riverwalk—that will follow the five-mile waterway’s course.

Long hyped as one of the city’s most appealing not-yet-developed districts, the Miami River neighborhood has come to frustrate planners and developers alike with its slow progress. (An article in The Big Bubble Miami, a local real estate website, bemoaned this week that “The future Miami Riverwalk is taking forever”—referring to the promenade, not the building.) But Camilo Miguel, Mast’s CEO, said in a statement that he hoped the new residential project could help spur along further development.

“Building community-elevating projects is at the core of the Mast Capital development strategy,” Miguel said. “The Miami River is the perfect example of this approach.”

Miguel pointed out that two of Miami’s biggest employment centers, Brickell and the Miami Health District, are each under two miles away from the Mast project, at 1001 Northwest Seventh Street. Brickell, which hosts some of the city’s most substantial office towers, and the Health District, where several hospitals and the University of Miami‘s medical school are located, combine to employ about 200,000 workers.

Construction on the project, which will comprise two eight-story buildings, is likely to begin early this year, the Miami Herald reported. Mast and AEW paid $26 million for the lot—which includes an acre of green space—when they bought the property in May 2018.

The River Walk is one of the biggest new rental projects planned for the banks of the Miami River, but it’s far from alone. About a mile upstream, Neology Life Development Group is at work transforming the remnants of a failed condominium project into a new rental tower, and across the river on its north bank, other developers led by Andrew Hellinger are at work on a big office-retail-residential complex that will include more rental units.

Almost 9,000 apartments have been added along the river—or are under construction—in the last twenty years, according to the Herald, and buildings that would bring another 4,250 units are in the planning stages.

Representatives for Mast and for PNC did not immediately respond to inquiries.