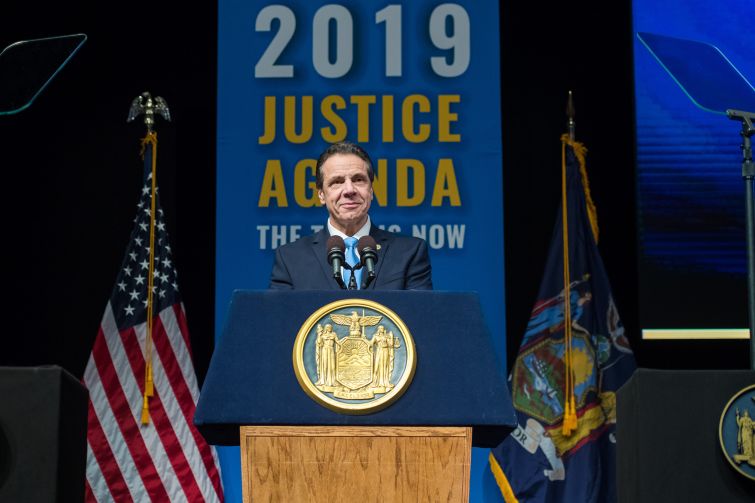 In his annual State of the State speech this afternoon, Governor Andrew Cuomo rolled out the budget and policy details of his “Justice Agenda” for 2019, which included subsidies for “clean” energy statewide, reforming the rent-regulation system and fixing the Metropolitan Transportation Authority while calling for the city to fund half of subway improvements.

A big plank of his new progressive agenda was a “Green New Deal” that would mandate 100 percent carbon-neutral electric power across New York State by 2040. The governor also plans to create a Climate Action Council, which would develop a plan to reduce the state’s carbon footprint 40 percent by 2030 and 80 percent by 2050. And the State University of New York’s environmental college would work with Regional Economic Development Councils, which are state-appointed economic advisory boards, to come up with green jobs plans for each part of the state. His speech also called for establishing a $70 million property tax compensation fund that would help communities close old power plants and transition to more environmentally friendly forms of renewable power.

Then the governor briefly touched on his commitment to reform rent regulations, including eliminating vacancy decontrol and “limiting” major capital improvements and individual apartment improvements. The newly Democratic state legislature finally has both the power and the political will to shift the the state’s half-century-old rent-stabilization system in the direction of tenants.

Cuomo also reiterated his intent to support public-sector unions and their right to organize after the Supreme Court’s controversial Janus decision. Along the same lines, he mentioned that he wants to require construction projects that receive public subsidies to pay prevailing wages.

The MTA and its disorganized bureaucracy have become one of the governor’s favorite public topics recently, as he searches for public justifications for his 11th-hour plan to avert the L train shutdown.

“The MTA was designed purposefully to diffuse political accountability, and it has,” he said. “When everyone is in charge, no one is in charge. But that does not work if you want actual results. This year we have to take the bull by the horns with the MTA.”

His office just put out a 356-page book outlining his policy proposals for 2019, but it didn’t shed much light on his purported MTA reorganization plan. “To overhaul this bureaucracy and fix the system, the governor will work with the legislature to establish clear authority over the MTA, while continuing to solve the need for dedicated funding and splitting capital funding shortfalls between New York City and New York State,” the book notes.

Finally, Cuomo advocated for the state legislature to pass congestion pricing as a way to generate revenue for subway repairs. His policy book calls for charging drivers in Manhattan south of 60th Street in order to fund transit improvements as well as help pay for the MTA’s 2020-2024 capital program. He also argued for the city to provide 50 percent of the cash for the MTA capital plan if there’s a budget shortfall after congestion pricing is implemented.