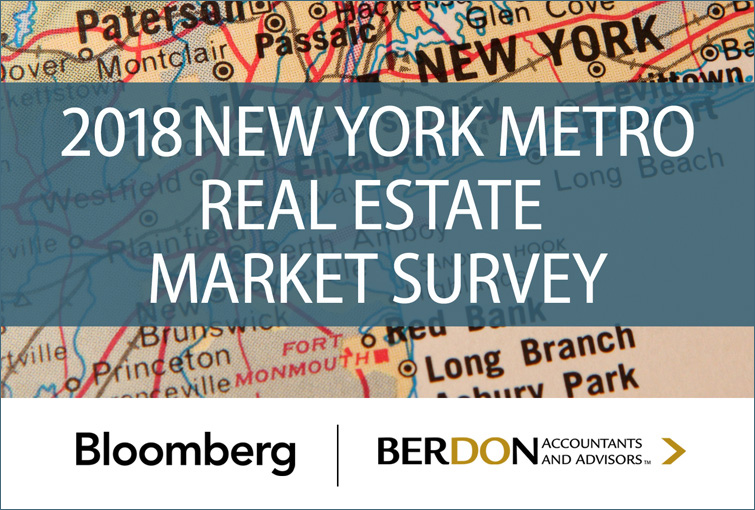 Berdon LLP Accountants and Advisors, in association with Bloomberg, has released its 2018 New York City Metro Real Estate Market Survey, where the city’s top real estate professionals provided their perceptions and insights on the current and future dynamics of the New York real estate market.

The survey reached out to a variety of high-level professionals in New York real estate, all of whom represented companies that own, lease, and/or develop real estate in the New York metro area, or provide broker or financing services to such companies.

For 2018, Manhattan was selected by 29 percent of respondents as the most popular submarket for the best near-term (18-month) development and investment opportunities. Queens was second at 21 percent, followed by Brooklyn at 16 percent, and the Bronx at 14 percent.

While a positive result for Manhattan, their share of this optimism dropped three percentage points since last year’s survey. Queens and Brooklyn are looking up by comparison, scoring six and four percentage points higher than in 2017, respectively.

Queens was among the most popular submarkets for companies with assets of $1 billion or more and those with holdings in industrial, hospitality and shopping centers.

William F. Saya, CPA, partner at Berdon LLP, notes that the survey was taken before the news that Amazon was bringing 25,000 jobs to Long Island City went public.

“Given Amazon’s recent HQ2 announcement,” he said, “development in Long Island City and surrounding areas are poised to explode in the coming months.”

Regarding the U.S. Tax Cuts and Jobs Act (TCJA) and its impact on New York real estate, 70 percent of respondents believe it will have a positive effect on the New York City metro area market.

For interest rates, 78 percent of respondents saw rates trending higher over the next 18 months, up from 60 percent in 2017. While most, 66 percent, believed the increase will be between 25 and 100 basis points (bps), 12 percent took a bolder stance, foreseeing an increase higher than that.

“This is one of the most impactful observations in this survey,” said Saya.

“This trend of strained net rents in the commercial market appears related to a number of factors, including the high amount of office inventory available and the shifting demands of commercial tenants who are being influenced by nontraditional landlords, including co-working brands like WeWork.”

On the topic of financing, over seven in ten respondents, at 71 percent, saw the financing outlook for the next year as either somewhat favorable, at 43 percent, or very favorable, indicated by the 28 percent of those surveyed.

For additional information relating to the the 2018 New York City Metro Real Estate Market Survey or to request a copy of the complete survey results, please contact ContactUs@BerdonLLP.com or visit www.Berdonllp.com.