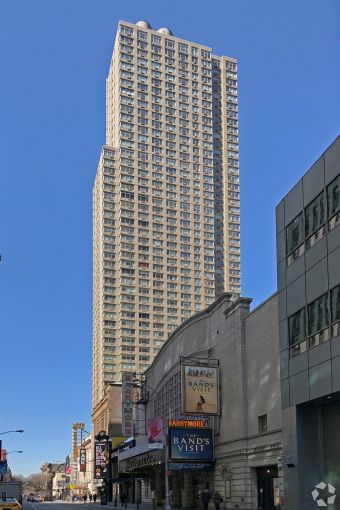 GreenOak Real Estate Advisors has landed $225 million in financing from Mesa West Capital to fund its acquisition of a residential rental tower in Midtown, according to property records and sources close to the deal.

The London-based landlord, led by John Carrafiell, teamed up with Slate Property Group to buy the building, 271 West 47th Street, for $280 million last month from Jack Parker Corporation, The Real Deal reported. The 52-story building, known as the Biltmore, comprises 464 apartments in a structure that abuts Eighth Avenue between West 47th and West 48th Streets.

When the building was in the hands of its previous owner, Jack Parker had financed it with debt from the New York State Housing Finance Agency and Fannie Mae. The new deal consolidates $115.3 million in previous debt assumed by Mesa West and includes a new $22.9 million gap mortgage and a $13.6 million building loan, New York City Department of Finance records show.

Built in 2001, the Biltmore has a fitness center, a screening room and a rooftop sundeck, and residents get free breakfast on weekdays. Street-level tenants in storefronts facing Eighth Avenue include Staples, a Starbucks cafe and a store that sells beauty products. Star America Preschool leases commercial space on the building’s second floor.

The purchase is the second big multifamily acquisition for the GreenOak and Slate duo this autumn, joining the pair’s $390 million purchase of 420 East 54th Street in mid-November.

Representatives for GreenOak, Slate and Mesa West did not immediately respond to inquiries.

This story was updated to include Newmark Knight Frank as the broker of the financing and also to include a loan amount of $225 million.