LA Panelists: Landlords Should Think Twice About Their Lenders 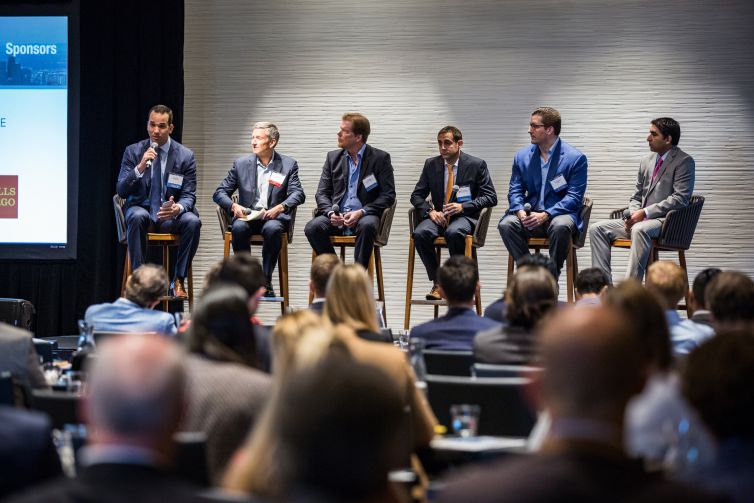 An unprecedentedly large field of lenders in the commercial real estate arena has driven hearty competition to deliver the highest leverage at the lowest prices. But that doesn’t mean the cheapest capital is always the best fit for borrowers.

That was the message that resounded from a chorus of west coast financiers on the second panel at Commercial Observer’s inaugural Financing Commercial Real Estate Forum in Los Angeles yesterday, and their warning was echoed by the banker, the fund managers, the mortgage real estate investment trust executive and the finance brokers who were on hand to comment.

Moderator Bill Fishel, the co-head of debt brokerage HFF‘s Los Angeles office, kicked things off by outlining the sheer volume of capital seeking to back real estate projects. Institutional investors as a whole control about $12 trillion, he said, and a decade ago, they aimed to invest about 5 percent of that total in U.S. commercial real estate. Today, years of favorable returns in the sector have encouraged those institutions to up their CRE target allocation to 10.4 percent.

“That’s $600 billion more of hammers looking for nails,” Fishel said, adding that separately, fund investors who target real estate are sitting on about $190 billion in capital seeking a home.

According to Wayne Brandt, a managing director who helps lead originations at Wells Fargo, all that new money is absolutely making waves in the industry.

“We’ve lost a tremendous amount of loan volume and market share to the CMBS market as well as the debt funds,” Brandt admitted, referring to Wells’ balance-sheet efforts.

All that competition has compressed spreads dramatically, contributing to some of the most appealing borrowing costs in recent memory. But even some borrower representatives say that cheap debt isn’t always a landlord’s friend.

“As a broker, you’re trying to advise your clients to take the best loan for their business plan,” said Seth Grossman, a senior managing director at Meridian Capital Group. “Your job is to bring your client all the different options. They see some outlier that could literally be 30 basis points tighter, [but] those economics are so meaningless in the big picture.”

Instead, Grossman often finds himself advising clients to borrow from a savvier—if slightly more expensive—institution. But persuading them can be a difficult task.

“When you say to a guy, ‘I know this [option] is cheaper, and I brought it to you, but I want you to go with group X,’ it’s much more difficult than you’d think [to] make that sale. People are so last-dollar-of-interest focused,” Grossman said.

Chris Allman, who through his work at investment fund CIM gets to wear both a borrower’s and a lender’s hat, echoed that sentiment, sharing examples of why a more experienced debt provider can be worth some extra spread.

“On construction deals, I’ve seen very few in my career…that don’t have overruns [or] that don’t go off plan. And you need to be talking to someone who understands that,” Allman said. “As people compete for yield, some of the smaller funds are shooting down and doing construction loans, and they often don’t know what they’re saying yes to when the agree to certain structural terms.”

Nik Chillar, head of banking at newcomer Crescit Capital Strategies, agreed, saying that opportunistic lenders who compete purely on price might not have the balance sheet strength to see projects through to fruition.

“You get a lot of bridge lenders focused on getting borrowers into three-year business plans, particularly in the smaller loan space. We see business plans that are clearly going to take longer, and we’ve built a balance sheet that allows us to be flexible [enough] to do a five-year bridge,” Chillar said. “I think it’s really important to be realistic as a borrower.”

“We put in a lot of work upfront,” Miller said of Starwood’s process. “If you just call and ask for a ballpark quote, I can give you that in three seconds. If you want a real quote, we’re going to have to do real work on it.”

Allman echoed the sentiment that there’s no way around doing the tough work of finding the best match for a financing need.

“You need to have a focus on relationships,” Allman said. “People who are…transactional often pay a very severe price.”