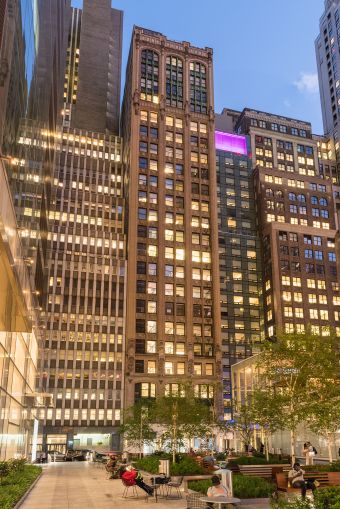 NKF Capital Markets co-heads Dustin Stolly and Jordan Roeschlaub negotiated the debt but declined to comment on the transaction.

The 22-story office and retail asset—located between Broadway and Avenue of the Americas—totals 349,274 square feet. The previous owners recently repositioned the property with a $30 million capital investment. The hundred-plus-year-old tower is currently 91 percent leased to 13 office tenants, including SpotCo, Roku and Kensington Publishing, as well as street-level restaurants. When plans for the building were announced in 1913, the tower—with its unusual sculptures of men in medieval costume carved into the facade—was the largest commercial building north of 23rd Street, according to the New York American Annual Real Estate Review.

Recent improvements include a new lobby that connects entrances on West 40th and West 41st Streets, updated elevators and larger floor-to-ceiling windows for the building’s street-level storefronts, according to CoStar Group.

“114W41 offers modern, collaborative office space with an urban feel, directly appealing to the new breed of cutting edge, fast-growing TAMI tenants that are currently flocking to Bryant Park,” Maher said in prepared remarks. “The asset further benefits from unobstructed views of Bryant Park, which is one of the busiest public spaces in the world.”

The Real Deal first reported in June that EQ Office was looking to sell the Bryant Park asset for around $300 million. EQ Office has owned the property since 2014, after buying it from L.H Charney & Associates for $165.7 million. It financed that acquisition with a $140 million loan from Deutsche Bank, city property records show.

NKF will continue to be responsible for the building’s leasing on behalf of Clarion.

This story was updated to include the acquisition financing amount and lender.