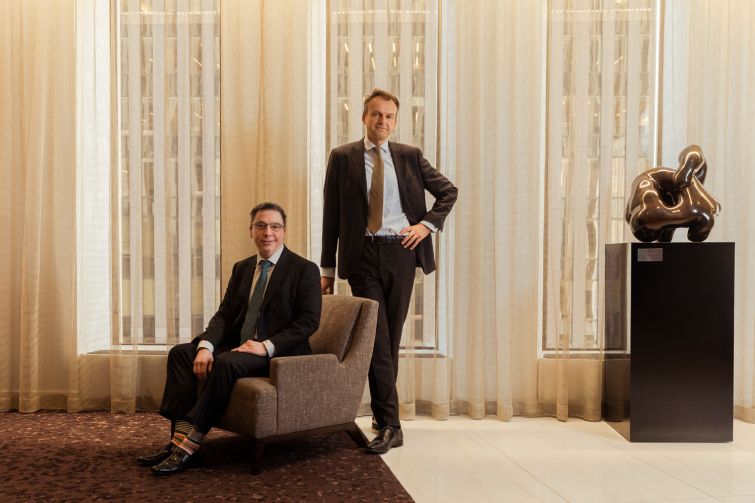 Commercial real estate isn’t just a relationship industry, it’s an increasingly global business. From an uptick in foreign investment in U.S. capital stacks to overseas buyers eyeing domestic assets, having boots on the ground as a lender while also having the ability to reach investors in each corner of the globe is key.  And Natixis has a new chief facilitating that capital flow.

Emmanuel Verhoosel took the reins as the French bank’s new global head of real estate in September and—as the year draws to a busy close—he has been hitting the ground running. Previously, Verhoosel was the head of commercial banking for ING Bank Belgium, and before that its head of real estate for the U.S., U.K. and Western Europe. He therefore brings extensive international experience to the table.

Verhoosel visited New York in November to further familiarize himself with Natixis’ U.S. pipeline (which totals $3 billion over the next two quarters). The bank expects to grow its U.S. real estate originations 30 percent year-over-year and—with one foot firmly in the CMBS sector—it’s also busy tackling borrower issues around the financing source as it goes.

While he was in town, Verhoosel and Greg Murphy, the head of real estate finance Americas, sat down with Commercial Observer for an exclusive interview. Both are fathers of three; Verhoosel resides in Paris and Murphy in Cobble Hill, Brooklyn.

Emmanuel Verhoosel: Thank you! The bank has decided to focus on four sectors: The first is infrastructure, the second is aviation, the third is energy and commodities and the fourth is real estate. As far as what we are doing here in the U.S., that means growing our financing capability—which includes M&A, equity capital markets and debt capital markets—into a sectorial capability around the world. Obviously not everywhere, but in the countries where we’re strongest as a bank. So, the real estate sector focus is a key strategy of the bank.

Describe the evolution of Natixis’ lending platform in the U.S. How has it evolved over the past five years or so?

Greg Murphy: We’ve certainly grown a lot. Over the past five or six years, we’ve doubled the team size—we’re effectively over 50 professionals now—and we’ve probably quadrupled our transaction volumes over that period, too. I’d say we’ve had steady growth over the past couple of years in particular as we’ve had increased focus on the international side of the business—whether it’s finding lending capital to deploy here in the U.S. or having more touch points with foreign borrowers who are investing here.

What continues to drive foreign capital to U.S. real estate?

GM: I think the statistics would back this up, but real estate is becoming more and more international and the U.S. real estate market has really become a repository of safe capital and part of a lot of foreign investors’ strategies.

EV: What we’ve seen lately is that the flow of capital—whether in investment in equity or debt—is an international arbitrage that is being done with pockets of capital chasing product according to macroeconomic events, which are not always linked to real estate. This means that you have pockets of Korean money investing in the U.S. while another location will have a different pocket of money chasing it. So, the capital is moving around. As a bank our distinctive feature is that we have the expertise on the ground in the U.S., in Europe and in Asia.

Greg, you said on a CO panel recently that you’re seeing a lot more foreign capital interested in investing in U.S. debt. Where is this capital primarily coming from?

GM: We’ve had people come into our transactions from Korea, Japan, China, Taiwan, Singapore, Israel and Europe. There have been waves from different places. I think last year there was perhaps more Korean interest in mezzanine debt and this year we’re seeing domestic investors fill that part of the capital stack. I think, as Emmanuel just said, capital flows for macroeconomic reasons that we don’t necessarily know; it moves in and out and we need to be ready to quickly take advantage of this capital flow and help it go where it wants to go. We’re [a sizable but still] mid-sized big bank so I think we’re able to be a bit nimbler as a result of that. It’s not like we have to work through a complex web of a huge investment bank.

So you’re a flatter organization as a mid-sized big bank?

EV: In real estate finance we are active across the board, including development. When we have a good opportunity to serve clients and the deal makes sense for us there are less conditions imposed by the bank. Mid-sized banks are less procedural in that sense. The second aspect is we need agility. It’s key in today’s market—the agility to react to a situation quickly. We spoke about the ability to capture capital flow in order to serve clients and it’s also true for opportunities. So even if we’re talking about a new asset class in a different part of the world, we can mobilize the troops quite quickly.

Agility is a strength that debt funds typically boast, while banks have the reputation of being slower-moving. Is Natixis straddling both the traditional and alternative lending worlds in a way?

GM: I think that’s accurate. We’re able to cover a broad array of the real estate market because we bring in capital to be partners with us, whether it’s funds or developers who are also investing in mezzanine or subordinated debt. We have very strong partnerships with quite a number of investors that are higher up in the capital stack or have certain specialties themselves, whether it’s an office or hospitality property.

So you’re able to speak to every part of the capital stack when you execute a deal.

EV: We have the ability to do tailored financing for our clients and to work in situations which are more complex and do not fall directly into the box of what a debt fund can do or what a traditional bank can do. We have this flexibility, which is a competitive edge for sure.

Do you envision the balance sheet or CMBS side of your business being busiest going forward?

GM: As a real estate team we’re rather indifferent as to which part of the market we move our clients through. The most important thing is to get the borrower the right solution. We vary pretty dramatically from year to year. I think three years ago we were probably 75 or 80 percent CMBS-oriented. I think this year we might be 50/50 bank-syndicated loans versus loans that require some aspect of securitization.

EV: The pattern in Europe is, interestingly, very different. On the CMBS front in Europe there are only 10 deals per year, so the market is very small; the depth of the market is not there on the CMBS front. In Europe it’s a 100 percent bank syndication market and very few mezzanine structuring capabilities exist, but this is coming. So that’s also an advantage of the global franchise that we have. We intend to export more of the structuring solutions we have in the U.S. to Europe. We want to further export the technology developed by Greg, especially on the mezzanine front and that’s one of the next targets in our strategy.

So you’re going to be doing a lot of transatlantic traveling, Greg?

GM: Emmanuel will be doing a lot of traveling [laughs].

Will this strategy involve the educating of European investors?

GM: That will be part of it. The legal technology will also have to adapt to the various local markets.

What is the reason for the absence of mezzanine debt in Europe?

EV: In the European markets, the leverage was not required. So, there was no need to tranche the transaction in the same way as in the U.S. There’s so much liquidity in the market right now with the European Central Bank scheme that there’s fierce competition within the loan markets. On the mezzanine side, borrowers nowadays are quite conservative in terms of leverage, requesting generally around 60 percent. But, you now have U.S. funds developing the mezzanine capability on the debt side—which did not exist in Europe while already existing in the U.S. for a while—so they are hungry for mezzanine pieces, but no one is feeding them in Europe. So, in tranching a transaction and proposing an alternative solution to our clients than a 60 percent loan-to-value senior debt structure, it starts to make sense to the borrower. So that is why the market is shifting in Europe. The demand is there, and we need to create these products and embed them into traditional loan arrangements. It’s slow but it will accelerate in the next year or so, and we want to be ahead of the curve.

CMBS servicing in the U.S. has a bad reputation from a customer service perspective. I was interested to learn that Natixis is tackling this by carving out the controlling class and securitizing the rest, so that the bank can be the one to contact the servicer instead of the borrower.

GM: That’s exactly right. The goal is to solve a problem for a client when sometimes that client may not know exactly what his problem is. Some borrowers have an aversion to CMBS and it’s largely because of aftermarket service. I think the servicers have been getting better and better at it, but they’re still very large organizations and it’s hard to get personal service that way. For a few of our clients we’ve been able to tackle that issue by becoming the intermediary between them and the servicer. By holding the piece on our balance sheet that gives us some amount of leverage. It basically gives us a phone call but that can be very, very important.  We’ve been able to solve other problems too that are not servicing-related. In some cases, there’s been a need for a future funding, whether that is for capital expenditures or for tenant improvements or leasing commissions—and you can’t really accomplish that within the CMBS market very readily. We’ve been able to hold a piece outside the trust that then provides the future funding from our balance sheet.

How big a part of Natixis’ business will CRE CLOs be going forward?

GM: The CLO market has grown a lot and we’ve been growing with it; we’ve been consistently in the market. We have a joint venture with the corporate mid-market CLO group so we’re actively courting clients and have a number already on board.

And how are you immersing yourself in the U.S side of the business, Emmanuel?

EV: Two days ago, we went through the U.S. pipeline, which I am discovering as a newcomer, and we have close to $3 billion [in transactions] over the next two quarters. Two thirds are transactions with existing clients. I like that I see the same clients coming back, and often for different asset classes.

GM: I think we’re on schedule to surpass it. I’m actually hoping for around 30 percent higher production year-over-year.