The Top 5 Products From This Year’s PropTech Summit 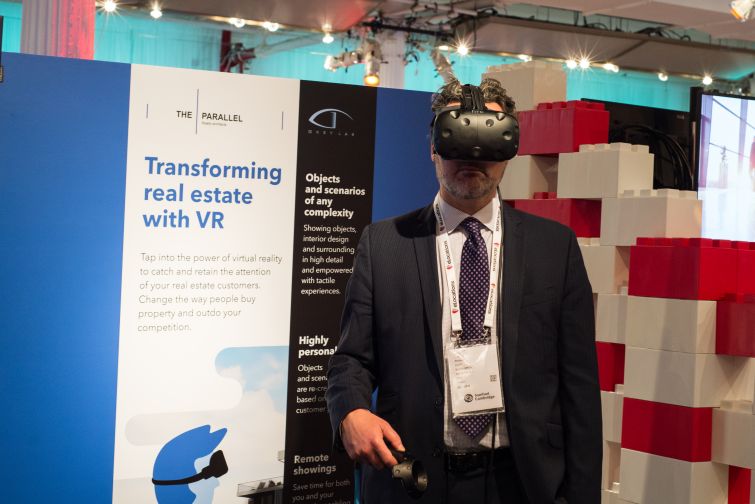 This year’s MIPIM PropTech Summit might have been the year of the blockchain as exhibitors like Meridio and i-House focused on bringing real estate to the crypto community, but there were plenty of other startups on display.

From being able to change the temperature of your office through Slack to virtually touring a space from the comfort of your home and being able to sign a lease online, here are some of the startups Commercial Observer saw walking the floor or the PropTech Summit.

Switzerland-based eLocations has built a searchable map of all vacant and occupied retail spaces in major cities like New York and London by scraping together public data—brokerage listings—and storing them on (what else?) the blockchain.

“That helps the brand, whether it be a Sephora or a Starbucks, to identify the right space, wherever that is in the world,” said Dan Innes, the chief marketing officer and co-founder of eLocations.

Aside from just showing you what spot is vacant, the company can also pull together reports on foot traffic, credit card usage, heat maps for which streets are seeing the most leasing activity and it should be able to figure out the actual vacancy rate in New York City (hint: it’s probably not 20 percent).

The next goal for eLocations is to take lease signing off of paper and create smart contracts on the blockchain, which they plan to launch in the spring.

“Using a smart contract you can start helping [owners] to manage [their] portfolios of thousand of properties wherever they are all over the world,” said Innes. “That would be so much more efficient, they’ll be less involvement from some of their advisers.”

And while some landlords might be wary of having their lease terms on the blockchain, eLocations plans to build a private one where only the parties involved in the transaction can see all the details.

Need to register a visitor to your office building but don’t want to click out of your chat window? Building Engines, web and mobile property management software for commercial real estate owners, launched its new module Bengie at MIPIM to do that.

Bengie, which can be used on Building Engines’ platform along with popular services like Slack and Facebook Messenger, lets tenants chat if they need services like a repair in their office or the heat turned down then pings the correct person in charge of it.

“Messaging is the way that people choose to communicate,” said Scott Sidman, the chief marketing and strategy officer for Building Engines. “We can extend all of the functionality we have today through a messaging app and we have the benefit of the bot learning getting smarter and understanding syntax.”

For owners, Bengie can also pull up documents like leases, and eventually Building Engines hopes it will be able to push out notifications like fire drills or free food in the lobby to tenants.

Building Engines, which is in 2 billion square feet in the U.S. and Canada, launched Bengie to all users on its platform in a beta test starting this week.

Smarten Spaces aims to take every tech you could want in building management—from implementing coworking to tenants scheduling meeting rooms—and put it on one platform.

The company, which launched last year in Singapore, focuses on making tenants and owners’ lives easier by just giving them one application to manage their offices. Smarten Spaces also provides data for enterprise users to optimize space with things like desk placement.

“[Owners] don’t need 15 vendors to come in and help them,” said Dinesh Malkani, the CEO and co-founder of Smarten Spaces. “In four to six weeks they could be up and running.”

To get to there, Smarten Spaces has started to push into the U.S. market and recently opened an office in Manhattan.

“We’re focused on the New York area to expand,” Malkani said. “We also signed up partners so that we can leverage on the partners’ capabilities for different states.”

Virtual reality might let you pretend to be Captain Kirk from Star Trek, but it also can help develop a building, according to startup The Parallel.

The company creates 3D models of properties either under construction or already built that users can tour with virtual reality headsets. Aside from the unique aspect of walking through a virtual site, Ashton Kehinde, a business development manager for The Parallel, said the application will be a game changer for architects working on the design of a project because they can view it from all angles.

Fuel is cloud-based software for commercial real estate properties that aims to put “all the information [of a building] at your fingertips,” said David DeFazio, the director of sales for the Chicago-based company.

From cap rates, to rent rolls, Fuel can pull the information of a portfolio to do things like assess the value of a property, create recovery structures and audit reports quickly, according to DeFazio.

“Basically it’s just trying to integrate with as many systems as possible in order to have all the information right there in one place,” DeFazio said.

Fuel started six years ago and just recently brought the product to market with about 250 users already signing on.