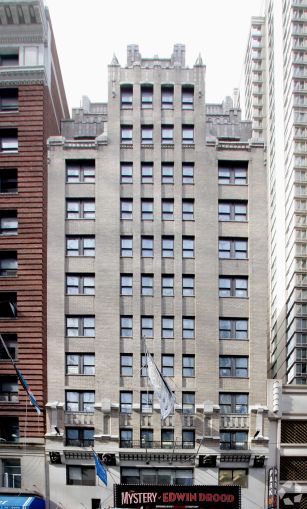 Allied Partners has refinanced its stake in the Theater District office building above Studio 54 with a $34 million loan from Signature Bank, according to records filed with the New York City Department of Finance.

The loan extends the $23 million outstanding balance of a previous mortgage—another Signature loan, from 2014—and adds $11 million in new debt, the documents show.

“We were happy to accommodate a very close relationship with a premier operator who has had both a long successful relationship and excellent history with the Bank,” John Zieran, Signature’s co-head of commercial real estate, said in an email.

The structure, at 254 West 54th Street between Broadway and Eighth Avenue, has served as a cultural landmark throughout its history, since its ground-floor auditorium first opened as an opera house in 1927. CBS took over the space in 1943 and used it to produce mid-century TV staples like To Tell the Truth, The $64,000 Question and What’s My Line, but the building’s most indelible incarnation kicked off in 1977 when Steve Rubell and Ian Schrager bought the property and turned the lower levels into a nightclub.

That club’s name, Studio 54, grew to be synonymous with an arts, fashion and disco scene that drew in notables from Andy Warhol and Truman Capote to Mick Jagger and Donald Trump. Renowned for its psychedelic accoutrements and its culture of open drug use, Studio 54’s ballroom attracted partiers keen to rub shoulders with the avant-garde on a dance floor that its proprietors once covered with four tons of glitter.

Eight years after the club closed in 1986, Allied bought the building for $5.5 million and soon leased the club space to the Roundabout Theater Company, which reconfigured the auditorium for its Broadway revival of the musical Cabaret. Roundabout bought the theater space from Allied in 2003, and it has since mounted dozens of Broadway productions there. Meanwhile, Allied still owns the 16-story office building above the theater.

Tenants there include Mandl School: The College of Allied Health, a for-profit college that runs associate-degree and medical-certificate programs from 39,000 square feet of space in the building. Prizmah, a network of Jewish day schools, leases 4,500 square feet for its headquarters.

A spokeswoman for Signature Bank did not immediately respond to an inquiry. Howard Slavin, Allied’s COO, declined to comment.