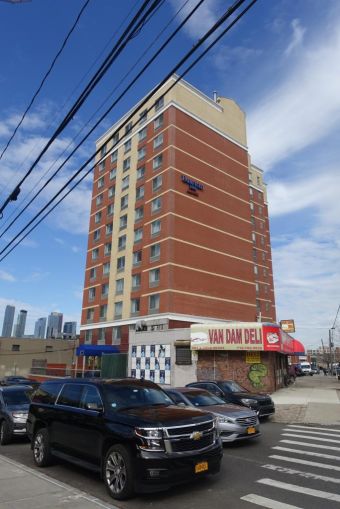 A hotel-turned-homeless shelter in the tiny Blissville section of Long Island City, Queens, sold to a Brooklyn-based developer for $36.5 million, property records show.

Shulem Herman bought the Fairfield Inn at 52-34 Van Dam Street between Starr Avenue and 34th Street from the family-run Lam Group in a deal that closed on Nov. 16, according to property records made public last week.

Lam and Herman did not immediately respond to requests for comments on the sale and it wasn’t clear who brokered the deal. Herman financed the deal with a $23.2 million mortgage from Sterling National Bank.

The 12-story hotel began housing up to 154 homeless families in March as part of Mayor Bill de Blasio’s Turning the Tide plan to fight back against the city’s rising homeless rates, The LIC Post reported.

As hotel development around New York City hit a fever pitch, the city started to house homeless families in ones in Brooklyn and Queens to ease overcrowding in homeless shelters, as Commercial Observer previously reported. Currently, the city has nearly 7,500 homeless people in hotels around the city, The New York Times reported.

The practice came under fire from community members and de Blasio promised to phase it out in 2016 after a man brutally murdered his girlfriend and two children in a Staten Island Ramada Inn being used as a homeless shelter. However, the city quietly restarted the practice in 2017 and it plans to spend $364 million per year to house homeless people in them over the next few years, Politico reported.

Aside from the Van Dam Street hotel, the tiny Blissville neighborhood currently has two other hotels being used as shelters, NPR reported.

The property is also a block away from 52-02 Van Dam Street where developer Sam Chang plans to build a 14-story hotel with 282 rooms, The Real Deal reported.

Aside from the Long Island City hotel, Herman recently bought the historic Pitkin Theater in Brownsville, Brooklyn, for $53 million in December 2018 and is planning on building a five-story mixed-use project at 137 Frost Street in Williamsburg, Brooklyn.