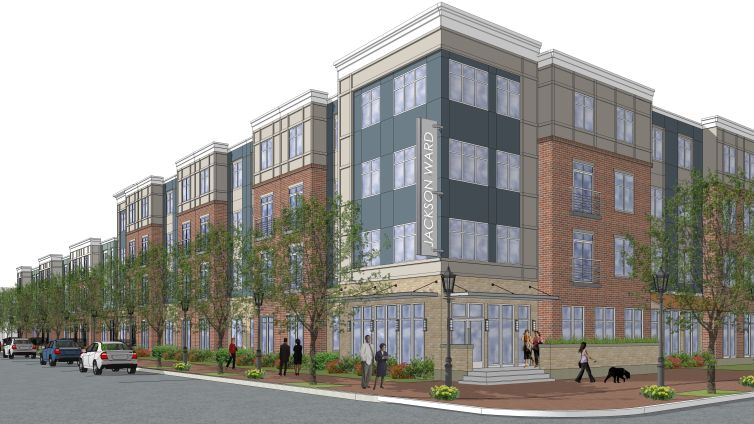 A rendering of the project in Richmond, Va. Image: Grimm & Parker Architecture/CPDC

CPDC sewed a complex patchwork of government incentives and private debt to fund the project, which was augmented by a $2.5 million equity investment from CPDC’s parent company, Enterprise Community Partners. SunTrust Bank, an Atlanta-based institution, chipped in a $7.5 million loan, and the project also leveraged a 9 percent state tax credit by working with the Virginia Housing Development Authority.

The development also won assistance from the Department of Housing and Urban Development, whose Section 8 program will support the project’s units for the elderly. HUD’s Low Income Housing Tax Credit will apply to the general working-class housing component.

The project will comprise two buildings—one existing and one that will be newly constructed—totaling 154 residential units. Nearly half of the residences will be set aside for low-income seniors relocating from an aging nearby facility, with another quarter reserved for working-class people of any age. Forty-six units will rent at market rate, and CPDC will also lease out 6,000 square feet of retail space, factors that CPDC’s Matt Engel said helped make the economics of the deal tick for the developer.

Jackson Ward Senior Housing, the new-construction building, will host seniors leaving Fay Towers, which is being gradually decommissioned as new senior facilities come online in stages in the surrounding area. At the groundbreaking late last month on the site at 701 North 1st Street, Richmond Mayor Levar Stoney said that the Jackson Ward project was an important part of the city’s plan to house its elderly population.

“Today is about taking care of our seniors and taking another step in our goal to provide quality affordable and mixed-income housing opportunities in our city,” Stoney said at the ceremony.

Engel said that CPDC was keen on the opportunity to contribute to the mayor’s plan to bolster Richmond’s affordable housing supply.

“The mayor is a very young, dynamic person,” Engel said. “He announced a goal for 1,500 new units [of affordable housing], and our goal is to attempt to contribute to that mission.”

The project’s other components, which include 82 multifamily units in an adjacent building that will be preserved and the smallish planned retail space, will adapt structures already in place. A disused convent, previously affiliated with an African-American Catholic church, will be converted to storefronts that Elgen predicted could be leased by a café or a dry cleaner.

“We are pleased that the Jackson Ward developments will be creating more housing opportunities in a historic neighborhood for families, seniors and persons with disabilities,” Susan Dewey, the executive director of the state’s housing development authority, said in a statement.

As baby boomers retire, lenders are lining up to deliver debt to a burgeoning wave of senior developments across the country. Investment volume in senior housing climbed more than 25 percent year-over-year in 2018’s second quarter, according to CBRE.