Having helmed some of NYC's most important modern planning initiatives, the Downtown Brooklyn Partnership president now wants to transform the CBD's office market. 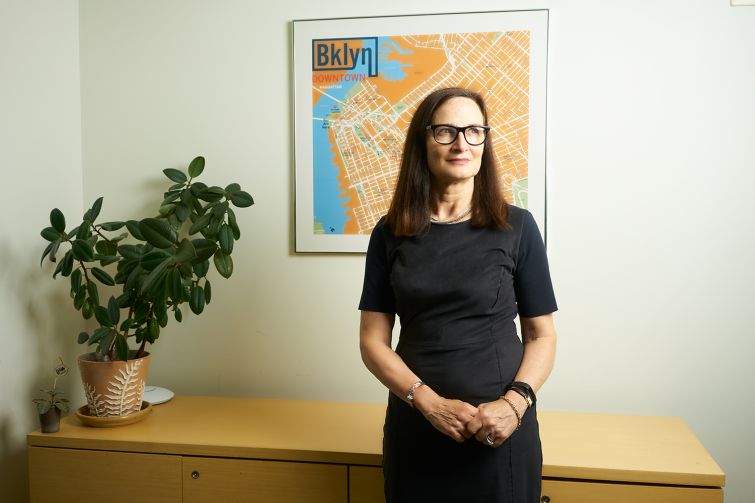 From a conference room in the Downtown Brooklyn Partnership’s offices on the 10th floor of 1 MetroTech Center, Regina Myer glances out the window. Across the street, unmistakable purple flags signify New York University’s presence at 370 Jay Street, where NYU has poured hundreds of millions of dollars into repurposing the former New York City Transit Authority headquarters into a 500,000-square-foot campus building dedicated to its engineering, applied sciences, technology and media arts programs.

For Myer—who became the president of the Downtown Brooklyn Partnership (DBP) in November 2016, after a nearly three-decade career in the realm of urban planning and development—NYU’s investment is emblematic of the sort of commercial ecosystem that she and her organization are aiming to foster in Downtown Brooklyn: one where cutting-edge, tech- and media-focused companies are drawn to a deep pool of young, educated talent in deciding to set up shop in the city’s third-largest central business district.

“We have a changing office environment; Downtown Brooklyn had really previously been dominated by government and back-office uses,” Myer noted. But through initiatives like the Brooklyn Tech Triangle—a partnership between the DBP, the Dumbo Improvement District and the Brooklyn Navy Yard Development Corp. formed to bring technology, media and creative companies to Brooklyn—Myer’s organization has “worked really hard to market Downtown Brooklyn as a place for innovation,” she said.

Myer admits that much work remains to be done, but the groundwork has undoubtedly already been laid. Downtown Brooklyn—which Myer helped rezone in 2004, as director of the Department of City Planning’s Brooklyn office—has seen an influx of thousands of new residents in recent years through myriad high-rise developments that have redrawn the borough’s skyline. Mixed-use projects like CityPoint have bolstered and diversified the neighborhood’s retail amenities, while valued cultural institutions including the Brooklyn Academy of Music, BRIC and the Theater for a New Audience call the area home.

But with “turning point” office projects like Tishman Speyer’s The Wheeler (which will create 620,000 square feet of new office space atop Macy’s existing department store at 422 Fulton Street) and JEMB Realty’s 500,000-square-foot One Willoughby Square now underway, Myer said she believes that Downtown Brooklyn’s profile as a commercial destination is ready to make its greatest leap forward since Forest City Ratner Companies’ development of MetroTech Center in the early 1990s.

“After that, there had been this sort of stasis here where the campus of MetroTech had certainly been thriving but there was a real question about the surrounding area,” Myer said. The new office projects, she added, “will really provide the balance to all the new residential [development] and provide places for companies to grow in Downtown Brooklyn. That’s really what we’re thinking about moving forward: how the remainder of Downtown Brooklyn should be available for office use.”

If Myer’s previous work is anything to go by, the DBP and its stakeholders are in good hands when it comes to achieving their goals for their neighborhood. The Long Island native has played a pivotal role in some of New York City’s most significant urban planning initiatives in recent memory.

After earning a master’s in urban planning at the University of Michigan, Myer joined the Department of City Planning in 1987. She eventually became the director of City Planning’s Brooklyn office in 1999 and subsequently worked alongside Bloomberg administration officials in overseeing the hugely consequential rezonings of both Downtown Brooklyn and the Greenpoint and Williamsburg waterfronts in the early 2000s.

She followed that with a brief stint at the Hudson Yards Development Corporation between 2006 and 2007 that saw her assist the largest private real estate development in the history of the U.S. through its request-for-proposals phase.

And as the president of the Brooklyn Bridge Park Corporation between 2007 and 2016, she spent much of her time guiding the waterfront reclamation project through its obstacles and controversies—eventually bringing it to fruition as an altogether successful example of what public-private partnerships can achieve.

Along the way, she earned a reputation among her colleagues in the realm of urban planning and development as one of the most talented and highly regarded individuals in her field.

“She’s someone who has all the good qualities of a civic leader,” according to Mitch Korbey, a partner at Herrick Feinstein and the chair of the law firm’s land use and zoning group. “There aren’t too many people who can look back on a career with this kind of an impact and track record.”

Myer served as Korbey’s deputy during his own tenure as director of the DCP’s Brooklyn office, and she eventually succeeded him in the role. As Korbey himself put it, “the [Brooklyn] office took off when she became director.”

Korbey attributed Myer’s success at the helm of so many important city planning initiatives to a skillset that extends well beyond her technical nous and expertise.

“When we worked together in the Brooklyn office, she had great political skills. She understood the needs of the neighborhood and how to communicate with the important stakeholders,” Korbey recalled. “She’s a tremendous manager and motivator of people. They don’t teach you how to be a manager in urban planning school—it’s something you either have or you don’t.”

Dan Doctoroff, who saw Myer’s work up close as deputy mayor for economic development and rebuilding during the Bloomberg administration, cited three attributes in particular that he said embody her value as an urban planner and public servant. “She uniquely combines great vision, nuanced community understanding and an intense focus on detail in order to make places better,” he said.

Doctoroff described Myer as “the driver of the Greenpoint and Williamsburg rezoning,” and lauded her ability to work with various stakeholder groups in communicating the purpose of what “obviously was going to represent a dramatic change” for the communities of north Brooklyn—one that saw huge swaths of the area’s formerly industrial waterfront rezoned for residential use.

“She led us through the whole thing,” Doctoroff recalled. “She has a unique capacity to understand the points of view and the motivators of very different constituencies and find a way to harmonize them without compromising the essence of what she’s trying to do. And that is a really rare skill.”

Perhaps no project tested Myer’s skills more than the redevelopment of the 1.3-mile strip of waterfront now known as Brooklyn Bridge Park. Despite vehement, litigious opposition from resident groups concerned about the park’s impact on the surrounding neighborhood, the Brooklyn Bridge Park Corporation was ultimately successful in its ongoing development of the 85-acre park, which broke ground in 2008 and saw roughly 5 million visitors last year.

The park was made possible through a public-private partnership that sees its continued maintenance and operation funded by revenues from five private real estate developments—including RAL Development’s Pier 6 and Toll Brothers’ Pierhouse projects—built on land adjacent to the park that the developers have long-term ground-leased from the city.

Doctoroff said Myer’s stewardship of Brooklyn Bridge Park (as well as her work on Hudson Yards) speaks to her “sophisticated understanding of what drives the private sector” in conceiving projects that are able to leverage private investment to serve the public interest. “She’s acutely aware of the kinds of conditions that we have to create in order to attract significant investment,” he said.

Among Myer’s fans in the realm of private development is Two Trees CEO Jed Walentas, whose firm owns more than 3 million square feet of real estate in Dumbo and is no stranger (via projects like its redevelopment of the Domino Sugar Refinery in South Williamsburg) to the balancing act that’s often involved when having to work hand in hand with public interests.

“I think what Regina’s always really fought for is not just development, but good and thoughtful development,” Walentas said. “I think her track record really speaks for itself; it’s hard to find another New Yorker who’s had as big a hand in as many transformational urban projects over the last 20 years.”

Walentas was less generous to “folks in communities who take a narrow view of things”—namely as it pertained to the community opposition that Brooklyn Bridge Park faced and speculation that the project would benefit the interests of private developers above all.

“It was always a totally fake argument that having income-producing assets adjacent to the park would privatize the park,” he said. “There was a financial underpinning to those decisions—our municipal budget is finite and limited. Having housing in that park is a good thing; having [residents] walk their dogs and baby carriages and be a part of the neighborhood is a good thing. It doesn’t private the park—that’s a fake argument.”

Chairing the board is Ofer Cohen, the founder and CEO of Brooklyn-focused commercial real estate brokerage TerraCRG. Cohen, who replaced L&L MAG CEO MaryAnne Gilmartin in the role this past summer, said he and Myer have the shared priority of furthering Downtown Brooklyn’s transformation into an office destination that can compete with any other submarket in the city.

“We need to take advantage of the amazing human capital in Brooklyn and make this place ultra-competitive as a business destination,” Cohen said. “In order to do that we have to put the private-public partnership engine to work, because none of that stuff can happen without that cooperation.”

For Myer, 58, who lives in Park Slope, Brooklyn, with her husband (they have two adult children), it’s simply the latest chapter in a distinguished career marked by an ability to bring various people and interests together and come up with big plans that benefit the greater good.

“Our goal is to promote the future of Downtown Brooklyn; that’s really done by communication, advocacy and coordination with our stakeholders and city agencies,” Myer said. “It’s quite hard work because there are a lot of players and a lot of opinions—but for us, [there are] a lot of possibilities.”